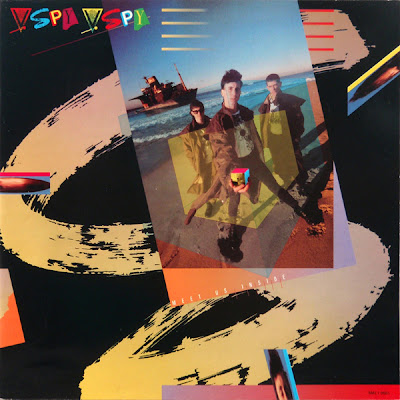 Spy vs Spy is an Australian rock band from Sydney formed in 1981. They have been known as V.Spy V.Spy, Spy V Spy and quite simply 'The Spies'.
V. Spy V. Spy formed during high school in Newcastle, New South Wales, when bassist Craig Bloxom met guitarist Michael Weiley. Later they moved to Sydney where they met drummer Cliff Grigg. They started off as Spy vs Spy, but had to change their name just prior to releasing their first EP, 'Four Fresh Lemons' to prevent a lawsuit from Mad Magazine. The E.P was recorded for friends on an independent label, Green. The E.P's original pressing was a limited release of 1000 copies. They sold out in 5 days.
Originally the band oscillated between a kind of rocksteady-paced reggae and full tilt Oz rock. This was popular at the time that they formed - there was this whole ska/reggae thing that permeated the Australian music scene at the time, probably due to the influence of Madness and The Specials. 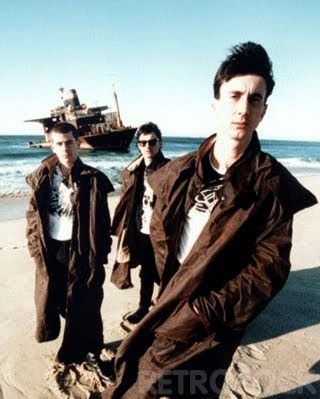 The Spies' music had this potent rhythmic reggae twist initially, no doubt thanks to the lovely skins work of Grigg. It wouldn't be long before some of their signature sounds started to emerge - particularly Grigg's drumming. Eventually their rock side would prevail over the reggae side.
Bloxom eventually became the lead vocalist, singing tales of inner suburban squalor. I read somewhere a tale of Grigg (I think) being busted for squatting illegally, which was probably fairly routine for inner suburban Australian musicians at the time.
They briefly broke up in early 1983 but thankfully were back together by July of that year - temporarily with a fourth member, Marcus Phelan.
Managed by Gary Morris of Midnight Oil fame, the Spies created an unique sound based around Craig Bloxom's driving bass, Michael Weiley on guitar & Cliff Grigg on percussion. Three piece bands often fight to achieve prominence, in the Spies case this was achieved by ear bleeding sound levels coupled with anthemic lyrics and Bloxom and Wieley's alternating vocals.
. 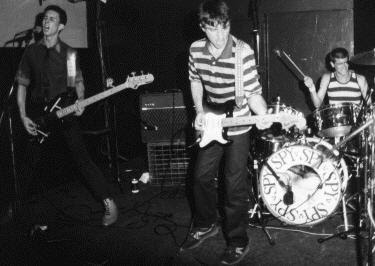 Anyway, to the Mini LP featured in this post. They still hadn't recorded a full length LP at the time, although 'Meet Us Inside' included not one but two bona fide rock epics in "One Of A Kind" and "Mugshot", which clocked in at 6:28 and 7:20 respectively. Not bad for a five track EP. I don't recall them ever doing a rock epic again.
"One Of A Kind" was released in truncated form as a single, but as always the E.P edit is far superior. The song itself starts with some nice rimshots by Grigg followed by the bass of Bloxom. Eventually the signature riff of Weiley's is sighted - an amazingly simple one at that.
Bloxom had this rather earnest vocal delivery which worked for a lot of their tunes and had progressed from the more weedy delivery on their earlier work. It would beef up further in years to come.
On this tune, as with some other Spies' tunes, Bloxom's vocals are punctuated by these little spoken rants delivered by Weiley, which could scared the poo out of anyone. Presumably, this is a tune about mental illness. Eventually, Weiley's signature digital delay pedal shows up. Weiley loved that pedal, and with good reason - nothing symbolised the Spies' sound more than that pedal. The Digital Delay was to the Spies what Robert Smith's Chorus pedal was to The Cure. 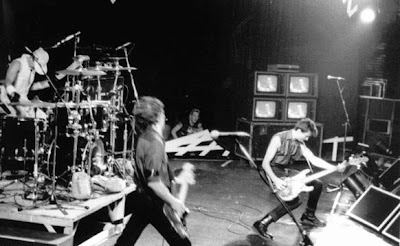 The Spies went on to record a trilogy of extremely strong albums in 'Harry's Reasons?', 'A.O. Mod. T.V. Vers'. and 'Xenophobia [Why?]' before returning to their reggae roots a little with 'Trash The Planet' in 1989.
The Spies travelled to the UK to record 'Trash The Planet' but this album wasn't nearly as strong as the previous three, and the Spies found themselves without a label. Grigg left about this time to be replaced by Mark Cuffe.
Somehow along the way, they'd picked up the tag, "Poor Man's Midnight Oil", no doubt due to both the political content of their lyrics and the fact that they shared a manager with Midnight Oil.
. 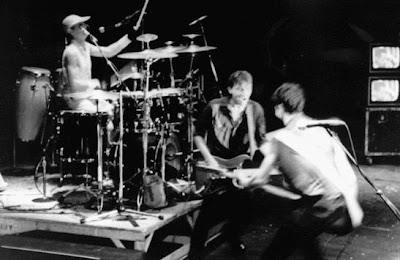 They changed their name back to Spy vs Spy before recording Fossil, and around this time they discovered religion and became committed Christians. I didn't hear much from them after this, although I remember reading something where Cuffe moved out the front of the band to share lead vocals with Bloxom and Weiley and they got another drummer.
A 'best of' collection, 'The Spy File', was released in June 1992. Subsequent release Fossil was relatively ordinary and the band called it a day in 1994.
Bloxom appears to be a chef in Mexico, now, judging by his profile on Vuze.
In 2007, some of the former band members were touring as Spy - Spy and performing all of the classic hits. For a full discography of their albums, have a look at the following PDF
.
This post consists of a 320kps rip of this Mini LP taken from a cassette release (my vinyl copy has seen better days) and includes full album artwork and label scans. The reproduction is impressive and matches anything that could be produced from vinyl.
(band photos were sourced from The Spies Website with thanks)
.
Track Listing 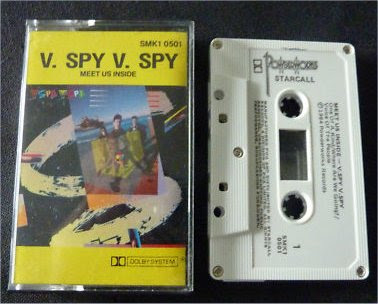 Posted by AussieRock at 8:28 PM