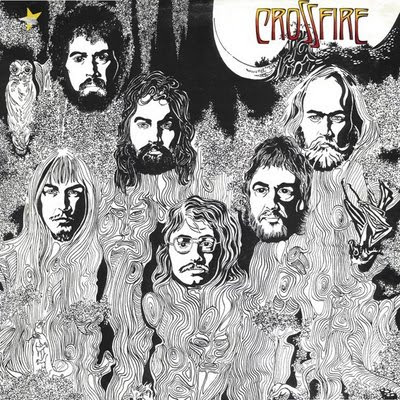 The cover may have you expecting some prog-psych-rock nightmare, but this is actually a rare piece of Australian 70s jazz. This album is largely instrumental but does include a vocal or two. It was only after many years that vocals would again feature when Crossfire toured with Michael Frank out front.
Crossfire were my introduction to electric jazz - introduced to the funk via the radio and some Reneé Geyer shows, then this local band Crossfire appeared in 1975, with some funk guitar riffs, rhodes and various woodwinds and brass, often with several instruments played through wah-wah pedals.
Listening to it again now, more than thirty years later, I think I can hear what they might have been listening to - maybe some early pre-guitar wank 'Return to Forever', some wah-wah Eddie Henderson, and even the occasional MPS jazz artist?
Crossfire made seven albums, and often backed international jazz visitors like Randy Brecker, Ben Sidran and of course Michael Franks on a 1980 live album. 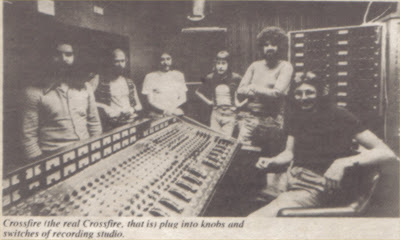 The following is an article published in the Dec 5 1975 edition of RAM magazine (editorial by Felicity Surtees)
.
Crossfire: The approach is serious
Ironical, that's what it turned out to be. Y'see there's this group in Sydney called Crossfire who've established something of a reputation for themselves around the biz. Stories of people standing on each other's shoulders and applauding till they came up in bruises were not uncommon.So here's what happens, your scribe turns up at the waterings-hole of French's to see the marvel and sure nuff, a band is playing involving and spontaneous music that stirs the crowd into mighty enthusiasm. They are finally let from the stage after they plead, "We just don't know anything else to play."Good group that Crossfire, heh?What's that?Well, turns out it wasn't Crossfire after all. Crossfire had had to cancel out of the gig and what had been blowing was a jamming outfit consisting of the rhythm section of Sydney group Rocket with a few footloose sax players, etc. thrown in.Oh, I see.So anyway, catching the real Crossfire the next Saturday arvo was something of an anticlimax. It turns out that Crossfire is a bunch of very competent musos with influences ranging far and wide — but somehow the afternoon seemed to be lacking in the uh ... high spirits dept. The audience was part ofCrossfire's dedicated following and there was polite applause after any particularly tasty solo etc. The approach was Serious.Earlier, as I d stumbled past the sprawled bodies of French's stairs, I d noticed a large poster asking Crossfire—Jazz or Rock? So I put the question to bass player, Greg Lyons. He returned it with a polite frown, saying, "That is not our doing. What we play is contemporary music. We re influenced by everyone really ..." Which basically means that Crossfire are not about to confine, define or restrict themselves with labels. "It allows everyone to be creative," explains Greg. Which is what Crossfire is about. A band where its members can feel free to experiment without compromising. It was originally formed as a creative outlet outside their "day jobs". Day jobs that ranged from percussionist lan Bloxsom's stint with the Sydney Symphony Orchestra to the various session/studio work of the other members. But now their first album Crossfire has been released, and it's gone past the stage of being just a creative outlet and has become a major part of their lives. As the band's guitarist, Jim Kelly puts it, "It's more of an onwards and upwards kind of thing."Oh, I see.......
. 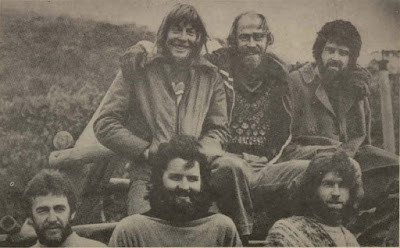 Post consists of a 320kps rip from vinyl and includes full album artwork (thanks to Micko and the Midoztouch community for the vinyl rip and scans). I have also included a scan of the magazine article featured above, along with a bonus track featuring Jim Kelly playing live at a small music venue called 'Queens Head Cafe' in Tasmania, sometime in 2011. Unfortunately, the track is untitled and was sourced via YouTube.
Complete with Derek Smalls 'etching' cover art, this is pure punchy driving fusion goodness, straight from the top drawer. Shades of Mahavishnu Orchestra, Soft Machine and electric Miles and all bundled up in knat's-chaff-tight arrangements.
This 1975 album is their first and best album in my opinion and I regret the day I sold my copy at a record fair back in the 80's. Hope you enjoy it!
.
Track Listing01. Remember The Trees (Jim Kelly) 02. Nobody Nose (Mick Kenny)03. Freddie Funkbump (Jim Kelly) 04. Perverted Pavanne (Mick Kenny) 05. Inside Out (Mick Kenny, Don Reid) 06. Nada (Ian Bloxsom) 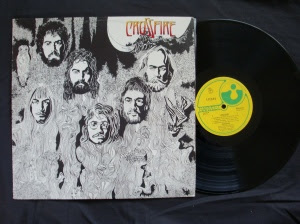