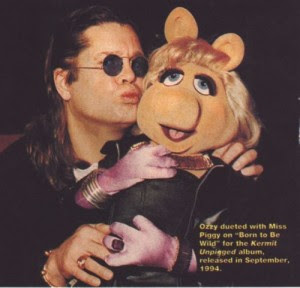 Yes, you did read that right. In 1994, the 'Prince of Darkness', pre-MTV contract Ozzy Osbourne “rocked the place down!” with Miss Piggy for the Muppets‘ cover album entitled 'Kermit Unpigged'.
Track 5 on this collaboration album starts with Miss Piggy arriving at the studio, and looks around for the rest of the Muppet group. She stumbles into a room where heavy metal performer Ozzy Osbourne is recording his next solo album, and she mutters, "Boy, did I pick the wrong door." But Osbourne is happy to see Miss Piggy, and invites her to come in for a raucous duet of "Born to Be Wild".
Collaboration is a somewhat inadequate term here, after all, it is Ozzy who does all the hard work on Steppenwolf‘s “Born to be Wild” (Miss Piggy just cracks cringe-worthy “jokes” and makes suggestive noises in the background). Seriously, though, “Prince of Darkness”, what happened to you? The number begins with Miss Piggy flattered that Ozzy is going to sing to her, and ends with her advising him "Ozzy, get off of the floor!". Perhaps you should have done a retake of Sabbath's 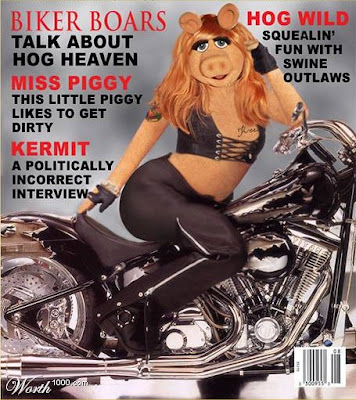 "War Pigs" instead Ozzy !
The album's recording of "Born to be Wild" was also featured on disc 3 ("Duets") of Ozzy Osbourne's "Prince of Darkness" collector's box set released in 2005.
Anyhow - hope you enjoy this Crazy addition to the WOCK on Vinyl hall of fame.
.
Post contains an mp3 (320k) rip from CD of Ozzy & Miss Piggy's cover "Born To Be Wild" along with some select photos of the two.
.
Born To Be Wild link (8Mb)
.
Posted by AussieRock at 9:12 PM