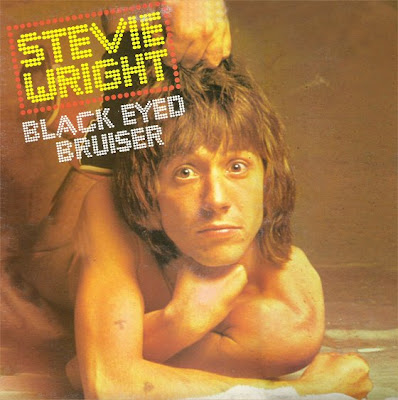 This is a good pop album. It has flash, it doesn't take itself seriously, the songs are strong, the production doesn't hide under a blanket. Mostly it stars one Stevie Weight, ex-Easybeat and sometime rock and roll vagabond — but producers / songwriters / guitarists Harry Vanda and George Young always make their presence felt and sometimes they step out and take right over.
The album has a theme to it: young Stevie is cast in the role of rock and roll fighter, struggling through the ranks of pop punkdom to some kind of Nirvana via attainment of big money and popularity.
The concept lays it on the line really. Vanda and Young and Wright aren't interested in layers of internal meaning, they're vitally concerned to make an immediate impact and they keep their riffs solid and memorable. They also recycle a lot. The Kink's "You Really Got Me" comes in for some revisiting on the title track "Black Eyed Bruiser". Fats Domino s "BlueBerry Hill" is re-serviced and refitted into "Twenty Dollar Bill", and so it goes on. But the re-conversion process happens with some taste and nothing is so blatant as to be embarrassing. 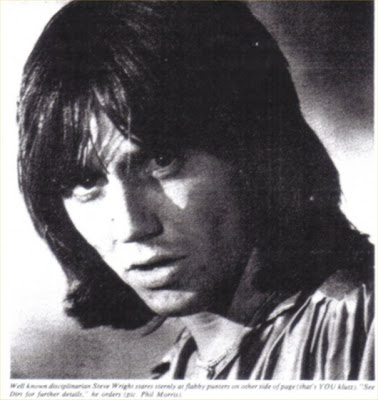 Stevie's voice holds up well throughout the album. His high notes are more and more sounding like strangled screams, but his range has deepened and he can get some awesome inflexions into his vocals that people like Dr. John would be proud to claim: "ev-uh-ree daaaeeaaaan ni-eeeet...."— that sort of thing.
Most important, its sustained flashy pop — except for where Stevie steps back to let massed choruses blow and guitars riff-on. It only happens on two songs "You" and "My Kind Of Music". "You" is some sort of distant relation to "Evie (parts I to 1.001)" but the exercise develops into something of an anti-climax when a female chorus takes over the chorus line. After the 25th honeyed rendition of "Aawl I waaaan is YOOOOOOOOOU", you really start longing for a strangled scream — anything — from Stevie. "My Kind Of Music" turns out to be a good cooking exercise for Warren Morgan, Johnny Dick and the rest of the (un-credited) band. (Review by Anthony O'Grady, RAM Magazine #14, Sept 6, 1975)
.
Juke Magazine published the following article on Stevie Wright in their May 1975 edition, which focused on his then recent comeback to the music industry, and his soon to be released album 'Black Eyed Bruiser' .
.
'One Of The Boys'Stevie Wright learn't recently that when England's glitter band Mott The Hoople were undergoing their most recent change they had considered the former Easy beats vocalist to front them. Through the years since the midsixties, there has always remained around the world a pronounced respect and nostalgia for the Easybeats, the Australian group made good internationally. Paul McCartney has often said that "Friday On My Mind" is one of his all-time favorite singles. But what the world Easybeats enthusiasts have never realised is that the group's most ordinal and worthy music was actually written and recorded in Australia.
."When we got to England", remembers a much older Stevie Wright, "we thought we had to change and we were taking all sorts of advice from all the people who were offering it. Even our manager wanted to have a hand in the group's songwriting. I couldn't take that". 'Little' Stevie intimated that this was a large part of the reason why, once the Easybeats landed in England, Stevie stopped co-writing the group's material, and Harry Vanda teamed with guitarist George Young instead. "Here in Australia our manager was like an older brother to us. We'd always be able to lean on him and twist his advice. But when we got to England we just couldn't respect his decisions anymore. We had as much to do with the running of the band as he did." 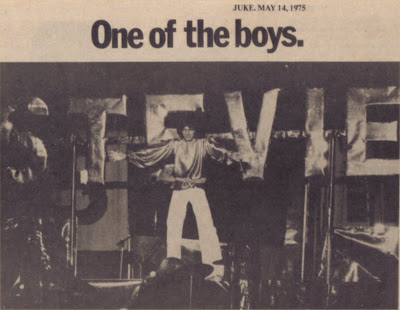 In the end, this situation between the Easys and their management disintegrated the band. Mike Vaughn (the manager) was signing the group, to any record company silly enough to believe they were free and left the group to grapple with the crippling legalities he was shoving the group's way as he skipped from record company to record company. "That was really frustrating", says Stevie now. "By then we had Tony Cahill on drums and we were a much better band than we'd ever been". George Young and Harry Vanda turned their attentions to the tasks of being non-performing songwriters and record producers, finally returning to Australian soil a couple of years ago. Stevie Wright, on the other hand, drifted aimlessly on the perimeters of the Australian music business On his earlier return, finally gaining a semblance of recognition again with his role in the Sydney stage presentation of "Jesus Christ Superstar". This gave him the confidence to attempt a solo album of his own songs. "It just wasn't coming together", confesses Steve. After a long time I went to the boys (Vanda and Young) and they saw the basis of something good in what I'd done. They over-dubbed on the tracks I'd started and added some of their own songs. They played practically everything on the album between the two of them". The result of course was the 'Hard Road' album, which won Stevie Wright two gold records for its Australian sales. 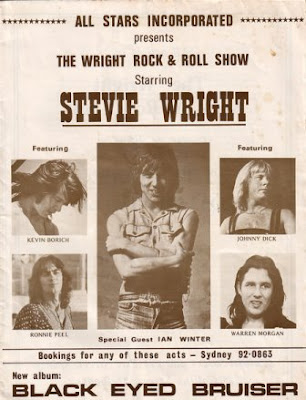 Now, in the coming weeks, there's to be a second album, consisting this time totally of Vanda-Young songs. "I've had a dry spell with my songwriting", Stevie will say, dismissing with that the obvious question. One gets the impression however, that Stevie will "go along with anything, without much self determination". Turning out song after song for the likes of Johnny Farnham, William Shakespeare and John Young, as well as for Stevie Wright, the boys' have become some what of a songwriting machine. They also produce the records of AC/DC which includes two younger Young brothers. They've been back on stage only once, backing Stevie Wright in concert, after Stevie had gone through an endless chain of abortive attempts to keep a band together to help him perform the Stevie Wright sound on stage. There he was, with a nation-wide smash hit on his hands and unable to turn out a decent live performance. Stevie, it turns out, doesn't seem capable of keeping a band together. He shouldn't even have to pick its members. Stevie quite clearly just wants to sing. He doesn't even care a lot what it is he sings, just as long as he's having nearly a good time. So when Stevie's reputation was taking a dive due to his ugly live appearances, the Vanda-Young team moved in to give their companion the lift he needed back towards something like a professional sound. They hadn't performed in front of an audience for years. Stevie remembers with a smile, "It was like singing in front of a steam train. There was so much uncontrolled energy pounding out".
The Vanda-Young-Wright was joined on stage for these performances by former Aztecs, Johnny Dick and Warren Morgan. Although this handful of appearances probably brought back long forgotten Easybeat memories, Stevie much prefers singing with his current band, because it's obviously much less raw and more dynamic musically. Vanda and Young have been replaced by two former La De Das, Kevin Borich, and Ronnie Peel. A permanent group perhaps? "No", smiles Stevie again. "Those guys see me as a way to get to America." There is a look of resignation in his eyes. And amusement. Stevie Wright's Easybeat background, coupled with the outstanding success of his records since, has found Stevie with contracts for the release of his records in both England and America. 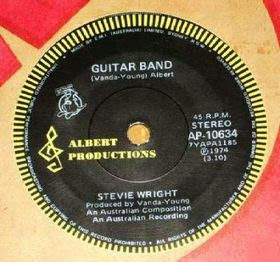 A trip overseas seems more than likely. And that's what Stevie's sidemen are counting on, says Stevie, "I wonder why those guys are even content to call the band The Stevie Wright Band. They've got much more reputation than I have. They've even got me splitting my performance fee with them equally." Again one gets this impression of an infinitely easy-going Stevie Wright, allowing his side-men to make their demands on him. All he wants to do is sing.... and avoid undue hassle. I don't think Stevie is even ambitious enough to dream of Easybeats-like big time as the end result of his solo pursuit. Those times are probably more like youth that's been spent and unobtainable again. He just wants a band to sing in front of, some songs to sing with them, and just enough of an audience to make it worthwhile. The ambition he leaves to those around him. And they're looking after that department quite nicely thank you.

The boys wanted me to get some songs together for the album, but I'd rather not have a song there for the sake of it, if it's going to be a mediocre song. I'm writing more now, and there'll probably be some more of my songs on the album after this one. Songwriting seems to come very easily to Stevie's former Easybeats comrades....perhaps even a little too easy. One recipient song of a Vanda-Young song tells how the pair pieced together bits of things they had lying around to come up with a satisfactory song when it was requested. (Article by By Ed. Nirhmervoll, Juke Magazine page 10, May 14, 1975)
.This rip was taken from my Vinyl at 320kps and includes full album artwork (thanks to Keith at Midoztouch). I have also included a rare live track of "My Kind Of Music" recorded at the Sydney Opera House in late 1974, and scans of both articles from RAM and Juke. 'Black Eyed Bruiser' was a great follow up LP to 'Hard Road' and includes one of my all time favourite Vanda-Young tracks "Guitar Band". 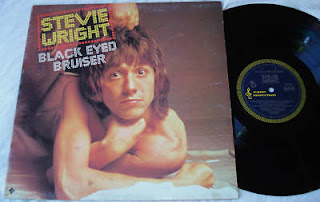