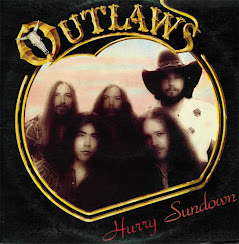 In many ways this is a typical Southern rock album. the Outlaws employed the sub-genre's usual country influences and multiple lead guitarists but instead of the dual lead setup used by many Southerners they assaulted your speakers with a loud electric trio. Fronting the quintet were Hughie Thomasson, Billy Jones, and Henry Paul. They were supported by the rhythm section of Frank O'Keefe on bass and Monte Yoho on drums.

What made these Floridians, and especially this album, so outstanding? The boys from Tampa could rock with wild, reckless abandon and be tasteful at the same time. The trio were among the most melodic of Dixie's electric axemen. Add sterling three part vocal harmonies to the mix that were worthy of Crosby, Stills, and Nash, and the clean production of Paul A. Rothchild who became famous for producing the early Doors albums, and we were all treated to some of the best Southern rock 'n roll ever put on vinyl.

The opening track on their 1975 debut LP "There Goes Another Love Song," became the band's biggest hit, while the album closer "Green Grass & High Tides," a song that followed in the footsteps of Lynyrd Skynyrd's "Free Bird.", became an arena anthem. It's literally 10mins of guitar-jamming, speaker blowing, head-banging, rock 'n roll.

The Outlaws never made a bad record but their debut was so phenomenal they were never able to top it. The album charted for sixteen weeks, peaked at number thirteen, and was deservedly certified gold in 1977.

Their follow up album, 'Lady In Waiting', contained "Breaker Breaker" a minor hit that took full advantage of the CB radio craze that was peaking around 1976. O'Keefe then left the band and was replaced by Harvey Dalton Arnold for 1977's 'Hurry Sundown'. The title track became a concert staple and fan favorite. Soon the band's lineup became a revolving door of personnel changes until they broke up in 1982. There was one more hit single, "Ghost Riders In The Sky" from the 1980 album, 'Ghost Rider'.

Unfortunately, only two of the original band members survive today. O'Keefe, a chronic alcoholic, died at age 44 in February 1995 and Jones was found dead less than a month earlier of unknown causes. Thomasson passed away from a heart attack in 2007. Paul and Yoho continue to play today in the most recent version of The Outlaws.
Interview with Henry Paul
“The story of the Outlaws is a pretty familiar one,” Paul begins, in a leisurely paced voice that’s full of warmth. He’s calling from a plot of land recently bought and built upon in Tennessee. “Somewhere along the way, most bands [of note] get lucky. For dreams to come true, hard work and persistence will only get you so far. The Outlaws came along in the boom that followed The Byrds, Buffalo Springfield and America’s explosion of folk rock. We were in the right place at the right time, in the wake of the Allman Brothers and the Eagles and the limited success of Poco.” 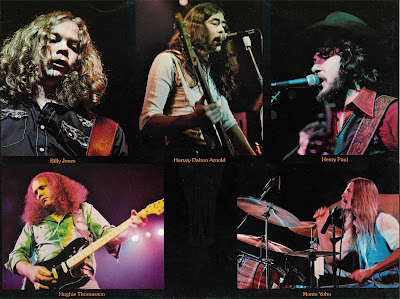 Like the Eagles, whose frontline members all sang, Thomasson, Paul and Jones were all accomplished lead vocalists, and the blending of the trio’s voices in three- or four-part harmonies, as well as rotation of who was at the microphone, soon became a trademark.

“Yeah, and that set us apart from most of the other bands. But what it really came down to was songs,” Paul states. “We not only had something to say, but also our own means of putting it out there. Compared to our contemporaries – for instance the Ronnie Van Zant approach to writing, which was simpler – our songs were rooted in a more poetic format.”

The Outlaws’ earliest gigs around Tampa were with The Allman Brothers, the Marshall Tucker Band, the Charlie Daniels Band and Lynyrd Skynyrd. 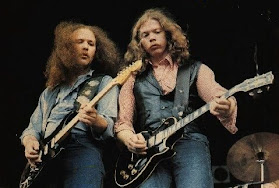 “Those were the four bands that we played with the most and really, really admired,” Paul says.

It was Skynyd’s Ronnie Van Zant who brought the Outlaws to the attention of their eventual home of Arista Records, forcing an executive to watch a support spot with Skynyrd in Columbus, Georgia in 1974. With typical bullishness, Van Zant collared label boss Clive Davis and told him: “If you don’t sign the Outlaws, then you’re the dumbest music person I’ve ever met – and I know that you’re not.”

“Ronnie was candid and confident and having his own good fortune, so he operated from a position of strength,” Paul reasons. “To Clive, his opinion meant far more than simply some guy from the audience. That endorsement was pretty much priceless. It was our ticket out of the bars and on to the bigger stages.”

After the Outlaws joined the roster at Arista, a self-titled debut followed in mid-75. Produced by Paul A Rothchild (who had worked with The Doors and Janis Joplin), its fusion of bluegrass, country and hard rock was an instant success, bringing them a gold disc and breaking into America’s Top 20 at the first attempt. This was largely due to the success of the single There Goes Another Love Song, which was written by Thomasson and drummer Yoho. The album’s sign-off epic, Green Grass And High Tides, had begun “as a four-minute ballad”, Paul remembers, although after the song grew and grew it would become perhaps the Outlaws’ most recognised number. Almost 10 minutes on record, High Tides closed all of their future shows in jammed-out guitar-duel form, doubling in length on the 1978 live album Bring It Back Alive.

“That one became our big guitar rave-up,” Paul says with a chuckle. “It allowed us to blaze it up every night.”

Despite the titular ‘grass’, the song was not an ode to the joys of marijuana; a sober(-ish) Hughie Thomasson had conceived it while at a beach cookout after imagining Jimi Hendrix, Janis Joplin, Duane Allman and Jim Morrison all arose from the grave to play a personal show for him, and naming it after High Tide And Green Grass, a Rolling Stones ‘best of’ album.

Their third album, 1977’s Hurry Sundown, was co-produced by Bill Szymczyk, of Eagles fame. It saw the Outlaws, now with new bass player Harvey Dalton Arnold, add a more emphatic country twist to their sound, with Thomasson layering pedal steel guitar on to So Afraid.
And yet despite the quality of Heavenly Blues, Holiday, Cold And Lonesome and the title song, the album didn’t even make the Top 50, stalling just outside. Then Henry Paul decided to follow Frank O’Keefe out the door, with a view to carving his own path.

“Looking back, Frank’s leaving the band and the breaking up of the original Outlaws was a big deal to everyone involved – maybe more than we realised that the time,” he explains. “It was a difficult set of circumstances for everybody.” [extract from LOUDERR: Classic Rock ] 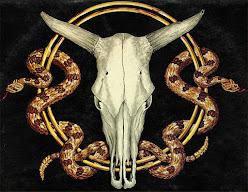 This post consists of FLACs ripped from my newly acquired vinyl (a diamond in the rough at a local Salvos) and includes full album artwork for vinyl and CD.  I nearly bought their debut album back in the late 70's when they were on sale at Brash Suttons in Geelong for $1.99.  Brash Sutton bargain bins were full of albums that never really hit it off in Australia due to lack of publicity and airtime on local radio stations.  Foresight would have been great at the time, as many of these albums are now collector items (Dragon's first 2 LP's, Kraan's Andy Nogger, several West, Bruce & Laing LP's and Eric Clapton's E.C Was Here to name but a few).
Anyhow, I'm wrapped to find this gem and still paid the same.
As a bonus, I am also including two great tracks from their debut LP, "There Goes Another Love Song" and "Green Grass & High Tides".  This is a great Southern Rock album
Track Listing 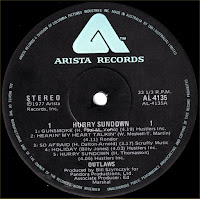 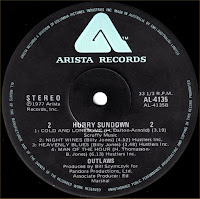