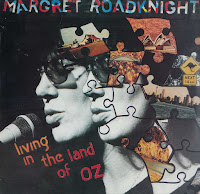 Margret RoadKnight (born July 1943 in Melbourne) is a renowned Australian singer. A unique and passionate artist, renowned for her powerful vocals and wide-ranging roots-based repertoire with lyrics full of wit and wisdom, Margret RoadKnight survives and thrives outside the mainstream music scene with flair and soul.
In a career spanning almost five decades, she has sung in a wide variety of styles including blues, jazz, gospel, comedy, cabaret, and folk. In the 1960s and 1970s RoadKnight appeared on numerous television programmes including 'Folkmoot', hosted by Leonard Teale, Dave's Place, hosted by the Kingston Trio's Dave Guard, and the ABC national weekly current affairs program Open-End. In 1976 she released the single Girls in Our Town, which reached the Top 40. 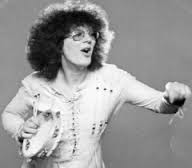 Biography
Margret started singing as a hobby in 1963 in Melbourne during the local jazz-folk boom of the time.
She continued her interest in singing and by 1973 she was working on a current affairs program in Canberra, performing songs she had written relating to news events. Later in the year Margret recorded a live album at Frank Traynor's club called People Get Ready.
In 1974 she was given a grant, to study contemporary music in the US, by the Australian Council for the Arts for a period of six months. On her return she appeared at university campuses and headlined a series of her own concerts. 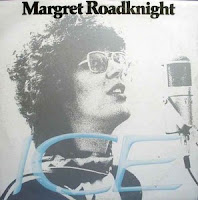 Her experience in America had developed her singing style to an international standard and late in 1975 she recorded a song written by Bob Hudson called 'Girls In Our Town'. The single was released in February '76 and became a national hit the following month. The record's popularity was also aided by the fact that it was considered, in part, to be a sequel to the 'Newcastle Song' which Bob had made a hit twelve months before.
In August, 1977 she left on a nine month working holiday to America, Europe, England and the Philippines.
Margret's long-awaited 'Ice' album finally came out in mid-1978. The album had to be re-mixed twice before she was satisfied with it. The record — which included one side on the coming of the ice-age — was described by reviewers as good, progressive jazz-folk. 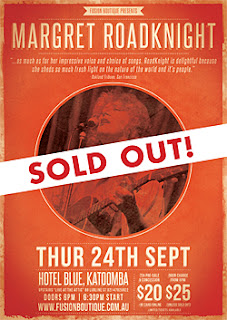 Following its release Margret left for the US, and later in the year performed in China with an Australian theatre group. [extract from Australian Encyclopedia of Rock by Noel McGrath, Outback Press, 1978 p262]

Five decades into her career, she continues to tour extensively, singing riveting if under-exposed songs, either a-cappella or with her guitar and African thumb piano, solo or with accompanying musicians, always interspersed with informative and amusing anecdotes (and yes, she still reprises her fondly remembered mid-’70s Australiana hit “Girls In Our Town”).

Margret has recorded ten solo albums and been featured on thirty one others.
She has sung blues, jazz, gospel, folk, comedy, and social commentary songs in concert halls and cathedrals, clubs and campuses, from Broome to Hobart, Beijing to Memphis, Paris to Auckland, Edinburgh to Tel Aviv, New York to Seoul, Amsterdam to Dublin, New Orleans to London, Vancouver to Nuku’alofa.
May 12th, 2013 marked the commencement of Margret RoadKnight’s Golden Jubilee (celebrating 50 years of professional performance) and concluded in April 2014 with her Lifetime Achievement Award from the National Folk Festival. [extract from eventfinda.com]

This post consists of FLACs and MP3's (320kps) ripped from my 'autographed' vinyl copy (see below)
Full album artwork and label scans are included along with many select photos - some sourced from Margret's website (with thanks). Also included are 2 bonus tracks sourced from Phyl Lobl's website.- "Make Mine Music" and "Ship Of Fools" from her Wanderer album (a collaboration album).
This compilation album is an excellent discography of Margret's career but if you are looking for something more extensive, then you might consider purchasing her Decade '75 - 84' CD, available from her website.
I particular like her covers of "Living In The Land Of Oz" (Ross Wilson), "I'll Be Gone" (Spectrum) and Doug Ashdown's "Winter In America" - on which she puts her personal spin. Not to be missed, so grab it now.
.
Track Listing 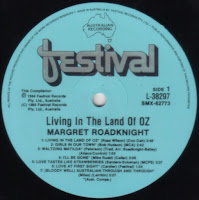 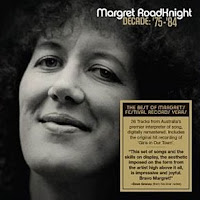