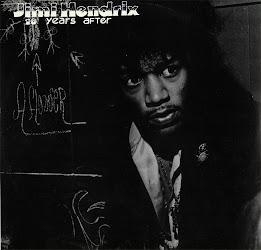 10 Years After is is a re-release of one of the first Hendrix bootlegs ever released - Live Experience, 67-68 which was itself released in 1970. Other titles have been Broadcasts (1971)and Goodbye, Jimi (1973). This is an '81 stereo bootleg with good to average audio quality. Record cover photos and text (front/back) are all in black and white which credits the release as printed in Japan by Record Man. However, the record label credits the music as 'Weird Sounds' originating from the USA.   Go Figure?

I suspect the vinyl was brought into the country separately from the covers which may have been printed locally. This was probably done to get the bootleg vinyl through customs. 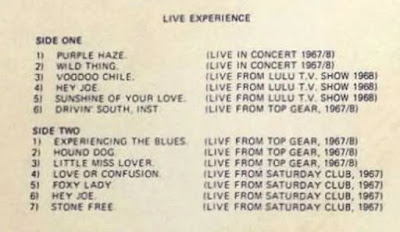 This compilation of Hendrix live material comes from four separate broadcasts, covering a three year time span between 1967-1969. These broadcasts are partially from a show in Worcester, MA 1968, some cuts from the Lulu and Top Gear Shows and BBC Saturday Club 1967. Jimi was absolutely ahead of his time.  You can also hear how much more fluid and improvisational his playing became from his early days on British radio to his T.V appearance two years later. The following are brief accounts of each source, as described in Tony Brown's 'Jimi Hendrix Concert Files' 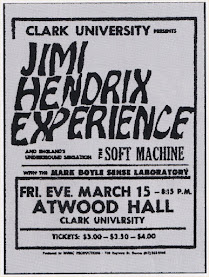 ATWOOD HALL, CLARK UNIVERSITY
Friday March 15, 1968
Worcester, Massachusetts.
The Experience perform two shows supported by Soft Machine.
They perform 'Are You Experienced', 'Fire', 'Hey Joe', 'The Star Spangled Banner' (performed here for the first known time), 'Foxy Lady', Purple Haze' and 'Wild Thing'.
Filmmaker Tony Palmer is at the hall. He has set up his equipment to film part of the Experience's show for a new documentary he is making for the BBC, called 'All My Loving' which was broadcast by the BBC on November 3. Tony films the Experience in the dressing room and also parts of their performances of 'Foxy Lady', 'Purple Haze' and 'Wild Thing'. 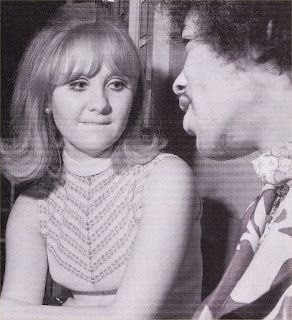 HAPPENING FOR LULU TV SHOW
Saturday January 4, 1969
BBC Television Studio.
Wood Lane, London.
Video Footage from this show can be seen HERE
The experience appear on Happening For Lulu, which is broadcast live from the BBC's TV Studios in Shepherd's Bush. They perform 'Voodoo Child', 'Hey Joe' and 'Sunshine Of Your Love'.
Lulu introduces the group on her BBC television show, with the following words: "He came over to Britain and wowed everyone here, then went back to America and became like Elvis Presley, only wilder. He got a few guys together in England and they call themselves The Jimi Hendrix Experience." The group opens with 'Voodoo Child (Slight Return)'.
After this, Lulu tells the audience, "'Well ladies and gentlemen, in case you didn't know, Jimi and the boys won in a big American magazine" (at this point Jimi lets out a very loud squeal from his guitar) "called Billboard, the group of the year. And they're gonna sing for you now the song that absolutely made them in this country' and I love to hear them sing it, 'Hey Joe'." 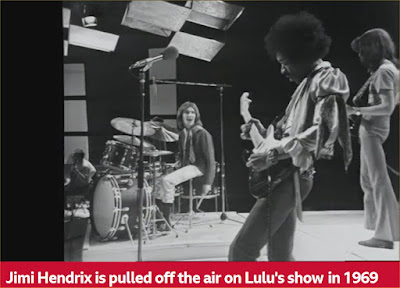 Jimi warns the audience to "Plug your ears, plug your ears", and laughs. He proceeds to play a wild introduction and then the more familiar introduction to the song. After the first line he discovers that his guitar is slightly out of tune and brings it back into tune with a smile. During the song, Jimi exclaims that he's forgotten the words but still manages to carry on. After the first verse the whole band stops playing and Jimi announces: "We'd like to stop playing this rubbish and, er, dedicate a song to The Cream, regardless of what kind of group they might be. And we'd like to dedicate it to Eric Clapton, Ginger Baker and Jack Bruce." With that, the Experience launch into 'The Sunshine Of Your Love".
By this time, producer Stanley Dorfmann is down on the studio floor desperately trying to get the band to stop playing' But Jimi looks over at him, screws up his face and gestures to him with his hand'. He comments "'We're being put off the air", before slowing the song down gradually and ending it. The show was being broadcast live and Jimi was originally down to sing a duet with Lulu at the end of the show.
After the broadcast, everyone returns to Maurice Gibb's flat to watch the show on his new video recorder. 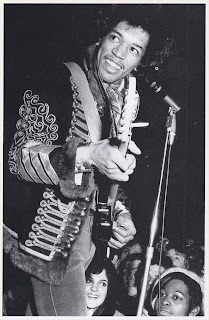 BBC RADIO ONE TOP GEAR SHOW
Friday October 6, 1967
BBC playhouse Theatre, London
The Experience are at the BBC playhouse Theatre in Northumberland Avenue, London, to record a programme for BBC Radio One's Top Gear. The show is introduced by Pete Drummond and Tommy Vance and broadcast on October 15 between 14:00pm and 17:00pm.
Jimi uses this session to play the kind of blues he really enjoys. They record their own arrangement of Muddy Waters 'Catfish Blues', loosely titled 'Experiencing The Blues'. Next Jimi records two alternate versions of 'Driving South, which he last played in Greenwich Village with Curtis Knight. He takes the opportunity to play 'Little Miss Lover', that was recorded in the studio only a few days earlier. Jimi would only play this song live one further time, during his concert in Toronto in 1969.
After an interview with Brian Matthews, Jimi then proceeds to play 'The Burning Of The Midnight Lamp, and finally concludes the session with his own version of Elvis's 'Hound Dog, complete with everyone barking and howling like dogs throughout. The session ends with everyone falling about laughing.
Visiting the BBC on the same day is Stevie Wonder. Jimi and Noel Redding take part in an informal jam session with Stevie playing drums. They jam loosely around the Stevie's song 'I Was Made To Love Her'. Fortunately the session was recorded but did nor get aired until May 25, 1979, on BBC Radio One's Friday Rock Show with Tommy Vance. 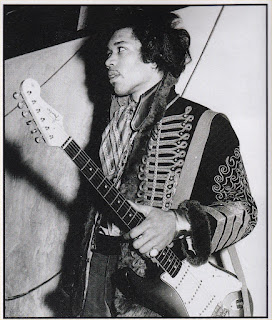 THE SATURDAY CLUB, BBC RADIO
Monday February 13, 1967
BBC Broadcasting House,
Great Portland Place, London
The Experience are back at the BBC to record a live radio recording for Saturday Club. The show is introduced by Brian Matthews and is broadcast on February 18. After an interview with Brian Matthews, The Experience then record 'Hey Joe', 'Stone Free' and 'Foxy Lady' but the song breaks down after the guitar solo and Jimi brings the song to a crashing end. They decide to record a second take of 'Foxy Lady', which is perfect. The last song they record is 'Love or Confusion', performed here live for the first and only time.
Bill Beeb: "We did a session in Studio 52 with is the sub-basement of Broadcasting House. And it's a relatively small studio and it really wasn't designed for Jimi Hendrix because the only way Jimi could get that kind of sound was to - in those days - was to wind everything up to absolutely full Power to get rid of screaming buzzes and clicks and feedback. 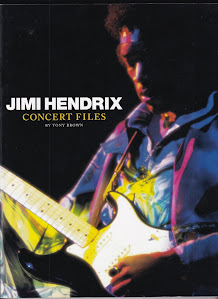 And so it was all hammering away, I mean when we turned everything off we could actually hear it coming through the glass, I mean it was soundproof glass. 'We got steaming into the first one and suddenly I was aware that somebody was standing behind me. There was this little old lady'.
She said I'm a radio three producer, well I'm actually doing a string quartet in the concert hall, which is two floors above you in this building. 'We keep hearing guitar sounds all the time. So I said can you wait and record when we've finished because we've only got a couple of numbers to do, she said no it's live. So Jimi Hendrix was going out live on Radio 3 at the same time ! [sourced from Jimi Hendrix, Concert Files by Tony Brown. Omnibus Press, 1999]
This post consists of MP3's (320kps) ripped from my vinyl boot which I purchased from Reading Records in Carlton, back in the mid-80's. Readings was my favourite go-to outlet for bootlegs at the time, but I had to pay premium prices for the service.  On reflection, I'm glad I did because my Hendrix collection wouldn't be anywhere near what it is today if I hadn't. Although this Hendrix bootleg isn't the greatest quality, sound wise; it does showcase Jimi's growth in guitar style and musical appreciation over a three year time span.  This is clearly evident when Jimi stops playing 'Hey Joe' on the Lulu Show and exclaims "We'd like to stop playing this rubbish and, er, dedicate a song to The Cream...."
As far as I can tell, this is the only post of this Bootleg available at this time. I choose to provide this in MP3 format as posting it in FLAC would have been a wasted venture in my opinion, based on the quality of the of the original pressing.  This bootleg is a must for all Hendrix enthusiasts, if not just for the cover artwork. 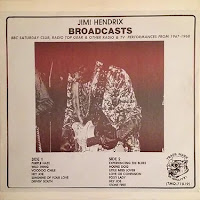 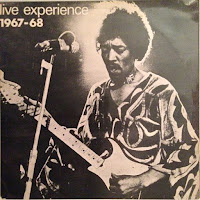 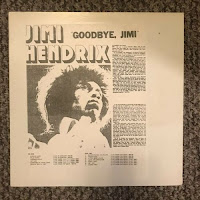