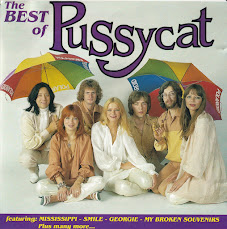 Pussycat became the third European act to hit number one in Britain in 1976, the only year until 1982 in which so many U.K. chart-toppers would come from the continent.

Pussycat were Lou Wille, his wife Tony who sang lead, her two sisters Henson and Betty Dragsta, Theo Wetzels, Theo Coumans and John Theunissen. The three girls had been telephone operators in Limburg, while John and the two Theos had begun as a three-piece outfit called Scum. Lou Wille played with his brothers in a group called Ricky Rendall and his Centurions until he married Toni and helped create a band called Sweet Reaction. 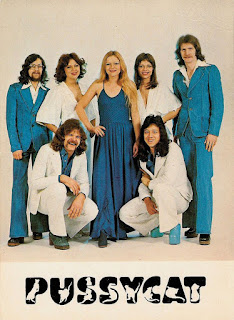 When this band signed to EMI in Holland and producer Eddy Hilberts took them into the studio, he changed their name to Pussycat and gave them a song written six years earlier by Werner Theunissen, who was guitar tutor to the three girls in Pussycat. The song "Mississppi" was their first single and four and a half million copies worldwide, making them the biggest thing to come out of Linburg since their cheese. [taken from Liner Notes]

It was followed by "Smile" in 1976, and "Hey Joe" in 1978. Other hits were "If You Ever Come to Amsterdam", "Georgie", "Wet Day in September" and "My Broken Souvenirs". Their career in Europe spanned more than a decade and included some seventeen albums. By 1978 Hans Lutjens had replaced Coumans on drums, as the band continued to release albums and tour, travelling as far afield as South Africa. They made regular appearances on the West German TV series, Musikladen, in the late 1970s and early 1980s. [Wikipedia] 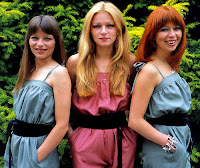 Pussycat were one of the many 70's bands that tried to mimic ABBA's sound, featuring complex multipart harmonies and catchy tunes. Unfortunately, they never really made it big in Australia, except for their first hit single "Mississippi".
This post consists of FLACs ripped from CD, and includes full album artwork for both vinyl and CD.  As a bonus, I have included the B-Side to their single Mississippi  called "Do It", which was also released on their first LP (ripped from my trusty vinyl).
Tracklist
01 Mississippi
02 Georgie
03 Smile
04 My Broken Souvenirs
05 Just A Woman
06 Mexicali Lane
07 If You Ever Come To Amsterdam
08 Wet Day In September
09 Bad Boy
10 Hey Joe
11 I'll Be Your Woman
12 It's The Same Old Song
13 You Don't Know
14 Goodbye To Lovin'
15 Do It (B-Side Single) *
* Ripped from vinyl
Pussycat were:
Toni Kowalczyk (married Willé) – lead vocals (1975-85)
Betty Kowalczyk (married Dragstra) – vocals (1975-85)
Marianne Kowalczyk (married Hensen, then Veldpaus) – vocals (1975-85)
Lou "Loulou" Willé (Toni's then husband) – guitar (1975-85)
John Theunissen – guitar (1975-80)
Theo Wetzels – bass guitar (1975-80)
Theo Coumans – drums (1975-78)
Pussycat FLAC Link (361Mb)
Posted by AussieRock at 8:38 PM