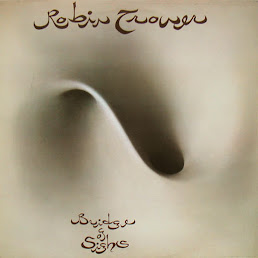 When Robin Trower left Procol Harum in 1971 to form a new band, the expectations were not high.

Although he had shown glimpses of promise on Procol Harum tracks like "Simple Sister" and "Whiskey Train" he was nonetheless playing inside a band dominated by eclectic lyrics and classically influenced keyboards.

When a short lived quartet called Jude failed to take off, Robin took almost a year's hiatus to form a power trio featuring Jude bassist and vocalist James Dewar and accomplished drummer Reg Isidore. The band's trademark sound was based on Trower's guitar and Dewar's smooth, dark and soulful vocals.

After signing a solo deal with Chrysalis in 1972, Trower released his first album, 'Twice Removed From Yesterday'. The album (released in 1973) was reasonably well-received, if dogged a bit by Hendrix comparisons. Robin never denied the influence, in fact, he explained exactly when and where he got his inspiration in one of the album's standout tracks, "Daydream". Even considering the respectable success of this first album and the band's incessant touring, few would have predicted that Trower's next album would still be regarded as one of the greatest rock guitar albums ever recorded.


Robin once called 'Bridges Of Sighs (1974) a "stack of my favourites", while proclaiming that the title track was the most enjoyable song to play live. The album has proved to be an enduring work of artistic creative depth, and has remained a classic for 25+years. Rarely has one album so beautifully showcased such a diverse, expansive rainbow of sounds created by a rock and blues-based three piece. Understated, sparse, subtle and alluring - yet still very bright - Bridges of Sighs is the best example of Robin Trower's magical muscianship.

Upon its release, the album flew up the U.S charts, reaching #7 on Billboard's Top 200. It eventually reached multi-platinum status without a true radio single or any concession to commercialism. Guitar Player magazine, the authority and most respective magazine of the time, would bestow their prestigious Album Of The Year award on Robin Trower for his songwriting and musical genius. The album clearly represented an artist and his band at the height of their craft, totally connecting with the audience. 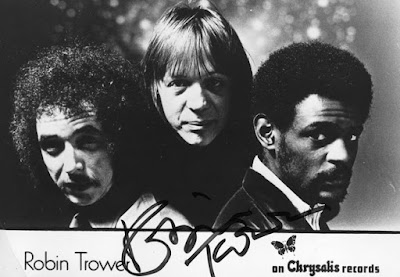 'Bridges of Sighs' also benefited from the huge popularity of FM rock radio, which was at the pinnacle of its influence in 1974. This fact was not lost on bands or record companies, and Robin's trio responded by playing a series of live broadcasts. The bonus live tracks included in this post come from one such performance recorded at the legendary Record Plant in Los Angeles on May 29, 1974 - barely a month after the album's release. The show was broadcast live that night on L.A's legendary rock powerhouse KMET. 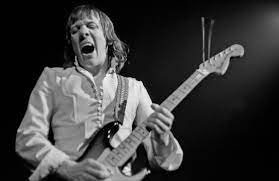 Such performances served as added proof of the trio's mastery of their art, and helped the band make the leap from clubs to arenas. A hearty work ethic and touring schedule built a huge and honest following which in turn confirmed the suggestion that 'Bridges Of Sighs' was the best rock album of 1974. A by-product of this success was Robin Trower's tremendous influence on the next generation of guitar players, who forever enshrined him among his generation's six-string elite.

In a '70s-era interview, Robin summed up the roots of his success, phenomenal skill and soul in his own words: "The blues are the single most important thing that has happened in this century. The blues are raw, vital and beautiful and in the right hands the electric guitar can be the most wonderful instrument". How true. [Liner notes by Jon Sutherland]

This post consists of FLACs ripped from the CD (Expanded Edition) release of this album which features bonus live tracks recorded at the legendary Record Plant in Los Angeles on May 29, 1974. 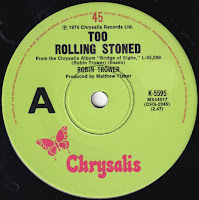 Full album artwork for both vinyl and CD are included along with label scans.  I have also included a rip of the single release of "Too Rolling Stoned" (see left), which is an edited version featuring the first 'fast' section of the song. However, it leaves one feeling somewhat short changed when its over and craving for the slower coda, which features one of Trower's most memorable riffs.

I clearly remember the first time I heard this album, while hanging out at a mates place (he was a big fan of Procol Harum), and listened to the album on his stereo with the volume cranked up to 10. When "Day of the Eagle" came blasting out of his Bose speakers I was gobsmacked, and it just got better and better. The other thing I love about this album and 3 other Trower LPS (see above) are the covers.  All designed by by Funky Paul, they have a distinct look which draws you in and certainly helps to grab your attention while they sit in the record racks.

'Bridges of Sighs' is definitely in my Top Ten Albums and I never tier of sitting back and playing this LP from start to finish, and the hairs on my back still stand up while I do. 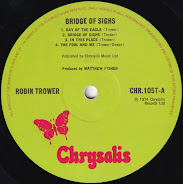 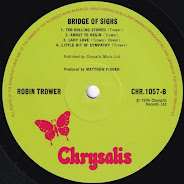