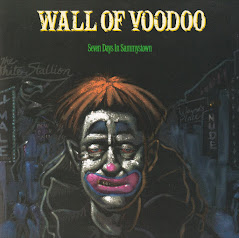 Wall of Voodoo was a New Wave band in The '80s. Formed in Los Angeles in 1977, the band had two line-ups: one with Stan Ridgway as singer, another with Andy Prieboy. The band's earlier sound (less so on the later albums) could be described as Something Completely Different, not unlike Devo. But instead of electronic dance music, their style was "Ennio Morricone meets New Wave". They made two original hits, "Mexican Radio" and "Far Side of Crazy".

The first main line-up, with Stan Ridgway on vocals, also had Marc Moreland (guitar), Bruce Moreland (bass, synthesizer), Chas T. Gray (synthesizer, vocals), and Joe Nanini (percussion). The band also extensively used a drum machine (given to Stan by voice acting legend Daws Butler) to back them up on albums and in live performances, with Nanini usually adding fills on old pots and pans, cowbells, and various percussive toys. After their first full release Dark Continent, Bruce had to leave because of his drug problems. Bassist and producer Bill Nolan came in as a replacement, and this line-up would record the song, "Mexican Radio"

In 1983, after a performance at the US Festival, Stan, Joe, and Bill jumped ship. Stan would go on to make an impressive solo career for himself, with his latest album, Mr. Trouble, released in 2012. He collaborated with Stewart Copeland on several occasions; e.g., the Rumble Fish soundtrack.
After Ridgway's departure, Marc, and Chas struggled to keep the band alive, despite Bruce coming back just in (the wrong) time. Luckily, two new members—singer Andy Prieboy and drummer Ned Leukhardt—joined up and the band released a new single, Big City in 1985. A new album, Seven Days in Sammystown shortly followed. One of Sammytown's tracks, "Far Side of Crazy", became a major hit in Australia, allowing the new Wall of Voodoo to make two more LPs, the last one being a Live Album. Bruce left the band again (same reasons) midway Happy Planet's sessions. Chas had to fill in for him, playing the bass on most of the record. Guest players were invited for live shows.

After the live LP, the band got dropped by IRS Records (along with many others, musical tastes were changing). Though most of the members faded into relative obscurity, Andy decided to continue. In 1990 he released ... Upon My Wicked Son, which consisted mostly of songs he wrote for WOV, with Ned on drums and Marc playing guitar on some of the tracks. After that, Andy released two more albums (the latest in 2010) and wrote the musical White Trash Wins Lotto. He scored an original hit, "Tomorrow Wendy," which was actually covered by Concrete Blonde first. [extract from tvtropes.org]
One Hit Wonders
Fans of MTV in its earliest days might remember "Mexican Radio," which became an underground hit in 1983 for being one of the first music videos played in heavy rotation. Read Patsavas in her own words below, and hear the radio version at the audio link. One of the great '80s bands, Wall of Voodoo, came out of the punk/alternative scene in Los Angeles in the [late '70s].

Stan Ridgway founded Wall of Voodoo. His company [Acme] was originally conceived as a soundtrack company for low-budget sci-fi and horror films and their offices were right across the street from the storied Masque Club in LA. Out of that club came The Germs and X and The Go-Go's.

And you can really hear that score and soundtrack influence in his music. I think "Mexican Radio" is one of the most compelling, memorable sing-alongs ever. It is just such a wonderfully weird song. Stan Ridgway's delivery is so unique.

The way that he weaved such interesting cultural references like noir, like Spaghetti Western and his tip-of-the-hat to Ennio Morricone. And once you understand that, you hear it right away. But as a casual fan, what you come away with on "Mexican Radio" is this glorious pop hit that you sing along to. When you deconstruct it, you can feel all those influences. And to me, that that's what makes an interesting all-time artist.
As a music supervisor, I'm always obsessed with different versions of songs. I must have discovered "Ring of Fire" after "Mexican Radio." I think it's one of the great covers [of] one of the best country songs of all time [by] the great Johnny Cash. "Ring of Fire" was actually written by June Carter Cash [and Merle Kilgore]. I think it's difficult to do a song that is so storied and well-known, but [on] the Wall of Voodoo version, which actually pre-dates "Mexican Radio," you can really hear the score influence. The second half of the song actually includes the theme from Our Man Flint, which of course was composed by Jerry Goldsmith.

Stan Ridgway not only thought in terms of writing a great pop hit, but also considered and used his scoring background. And perhaps that's part of the reason I love ["Ring of Fire"] so much. I can see it set to picture. It is minimalist and outrageously, wonderfully large all at the same time.
[review by Alexandra Patsavas at npr.org] 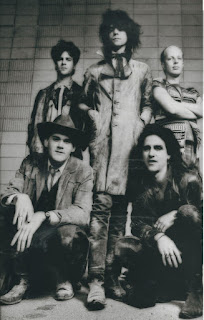 Wall Of Voodoo In Australia, 1986
Andy Prieboy reminisces:
Promoting Seven Days in Sammystown , we had crossed The States,Europe,Scandinavia, and, flying through the Chernobyl cloud , came at last to Australia.

Our song, Far Side of Crazy, was in the Australian Top Ten. We had been on the road seemingly for ever , playing every night. Travelling thousands and thousands of miles. Thus, this is a portrait of a band that had faced down a great deal of opposition and doubt. A band that had done an enormous amount of work, and did so fully committed to one another. A portrait of five guys who are exhausted, in some cases ill. A perfect moment to take a picture :on the other side of that wall ,an expectant audience waited . There is a show to do and we face it relaxed , controlled and confident.

We had survived . In many ways succeeded in spite of those who said we couldn't, wouldn't and shouldn't.  We were now more than a band. We were a brotherhood .A bond that lasts to this day. I had come along way from that first timid group from London . There would be another five years of this madness. [extract from andyprieboy.com]
This post consists of FLACs ripped from my CD and also contains full album artwork for both CD & Vinyl.  I thought it might sweeten the deal to include the mega hit "Mexican Radio" as a bonus track, along with their Johnny Cash cover "Ring of Fire" which was released on their first EP in 1980.
Often thought as a 'one hit wonder' I think this album will dispel this line of thought. 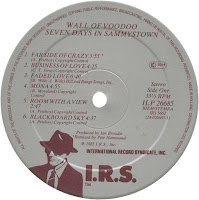 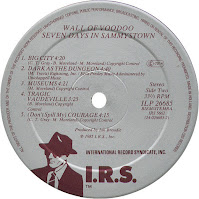