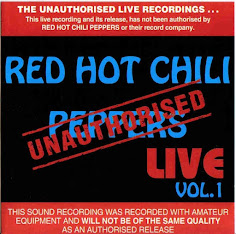 One thing George Clinton told me about playing funk I’ll never forget is, you have to take it all the way home,” says Flea. Sitting in the middle of a fashionable Melrose Avenue Italian bistro, the Red Hot Chili Pepper bassist and co-founder of the group is doing his share by wearing a beany with a propeller attached on top.

“You don’t give it up half-arsed,” chimes in his buddy, lead singer and fellow original member Anthony Kiedis, who’s attracting some attention via a particularly colourful tattoo on his shoulder “Funk is hard-core music which deals with hard-core emotions. War and peace. Love and hate …”

He might have added life and death, because that’s what the Chili Peppers confront on their fourth and apparently most successful LP, Mothe6 Milk (not including 1988’s “best or EP, Abbey Road). It took the heroin OD of long-time guitarist Hillel Slovak and the exit of drummer Jack Irons—and the addition of John Frusciante and Chad Smith to replace them—for Flea and Anthony to grab the reins of the Chili Peppers’ cult following and steer it toward the promised land of commercial success.
“The death of Hillel changed our entire attitude,” explains Anthony, the band’s spokesman. “Losing your best friend at the age of 26 is a mind- and soul-blower. But there was definitely an inspiration which came from Hillel dying which helped sharpen the focus of the band. Flea and I were left with each other, and we decided, ‘Here’s something we started a long time ago that we haven’t finished.’ We both realised we had to bear down, change our lifestyles and look at what was important to us—things like friendship, love, making great music and not getting sidetracked by the more negative influences in life. We tried to use our loss as a bolstering, positive influence—if nothing else, to prove to the world what we were doing was worthy and legitimate. Hillel may be dead; we’re not.”

The group underscored that resolve with the first single from the new album, the AOReady anthem called “Knock Me Down.” It’s a cautionary saga that warns, “If you see me getting high … knock me down.”

“Oddly, I began writing that song before Hillel died,” Anthony reveals. “I hadn’t really thought about completing it until after he passed away. It’s about recognising we’re all human beings and the best we can ever be is just that—human. Nobody is any better or worse than anybody else. And you’re never above a problem … including the deadly disease of addiction. One should be willing to accept the helping hand of your close friends instead of trying to do everything yourself. You should never think you’re so cool or in control you can take care of problems that are beyond being solved by an individual”
Anthony insists he feels not guilt about being unable to prevent what happened, only “ultimate sadness.” hindsight, I wished I could have helped him, but it’s ridiculous to dwell on that,” he says. “You can’t blame yourself.”

Instead, Anthony and Flea picked a pair of brand-new Chili Peppers and tried to turn their tragedy into triumph. After three albums and an EP that failed to dent the charts, the band was anxious to raise the stakes, insisting there was no pressure to do so from management or their label, EMI.

“We have a desire to communicate our music to a much larger amount of people than we have in the past,” agrees Flea, propeller blades turning on his hat. “I think we captured more energy than we ever have on record before. Considering everything that happened, the fact we stayed together was a big bonding factor.” “Our record company never attempted to ask us to do anything other than what we do,” claims Anthony.
“Probably more out of fear than anything else. I think it was that lack of pressure that helped us because we did our thing without changing for the sake of industry or radio or anything. The only pressure came from ourselves.”

The contributions of new guitarist Frusciante and drummer Smith were more than incidental. Frusciante was a Chatsworth, California valley guy who’d followed the Red Hot Chili Peppers as an avid fan before joining the group, the same day he quit Thelonious Monster. 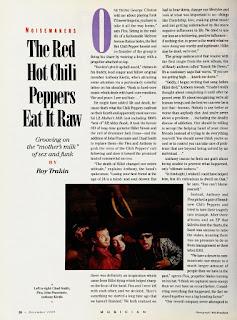 “It was like an injection of fresh monkey blood into the temple,” notes Anthony, digging into an appetiser of fresh mozzarella cheese. John adds, “I already felt like I was a member of this band spiritually before I ever met them. They were an extension of my attitude toward the world and music, and my philosophy of how I want to live my life.”

As for Detroit native Smith, he had no idea what the Chili Peppers were about before he auditioned. “We just explained we were a hard-core, bone-crunching, mayhem-inducing, psychedelic sexfunk band from heaven,” Anthony laughs. “And could he produce that type of drumming?

In its first few weeks of release, Mother’s Milk has sold almost 200,000 copies, more than any other previous Chili Peppers album. “This record is more radio-acceptable,” agrees Anthony. “Although it wasn’t our intention to change in that direction. We weren’t tiling to fit in. It was just a natural expression of how we felt. This was a direct link from our hearts, souls and genitals to guitars and vocal cords.” [extract from thechilisource.com] 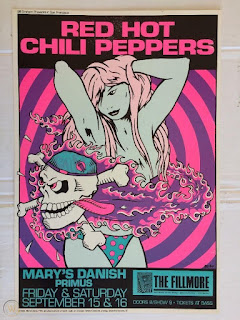 The Mother's Milk Tour
With John Frusciante and Chad Smith on board, Mother's Milk instantly garnered more attention than the band's previous records and, as such, the venues the band performed in were able to accommodate far larger crowds. The band was now playing more arenas than ever before and gaining more television and radio exposure, especially through college radio, which was a huge supporter of the album and helped the band to eventually gain more mainstream attention. For the first time the band also upgraded to a full-fledged tour bus and added backup musicians and singers.

The tour was by far the biggest tour for the band at the time breaking them through to new audiences and larger venues to perform at. The tour also included television appearances on such shows as The Arsenio Hall Show where they even performed a tribute to the late night host called "Ode To Arsenio" which was used as an intro to their cover of Stevie Wonder's "Higher Ground". In Austin, Texas, during the opening set by Mary's Danish, all four Chili Pepper's ran onstage totally naked, and tackled Mary's Danish two female lead singers. I suspect that Mary Danish were chosen as their support band as they had a common interest in the music of Jimi Hendrix. The RHCP's concert setlist at the time consisted of "Castles Made Of Sand" and "Crosstown Traffic"
FEATURE SHOW STATS
46th show of the "Mother's Milk Tour"
80th show in 1989
3rd show in Lakewood, OH
497th show in United States 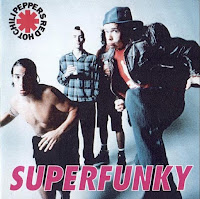 This post consists of MP3's (320kps) ripped from my JOKER bootleg CD, another unofficial release by AMCOS from the early 1990's in Australia.  This is a recording from their 3rd show held in Lakewood, Ohio on the 21st of November, 1989 at the Phantasy Theatre.
The quality of the recording is not as good as other JOKER releases I have heard, but the clarity is still there. The length of the set list on this bootleg is both short and incomplete, featuring only 10 of the 21 songs played on the night..  Sadly, the encore "Crosstown Traffic" is one of the missing tracks.
This bootleg has been released previously under the title "SuperFunky" (see above) and I have included artwork for both releases. Note that track 9 is listed on the Joker release as "Special Secret Song Inside" but of course the track is actually "Party On Your Pussy". I'm thinking that the JOKER team were worried about the back lash they might receive from the authorities if they printed its real name, as these bootlegs were sold in many mainstream outlets.
Of course, there's no first prize for guessing what Track 10's chorus line might be!
Tracklist 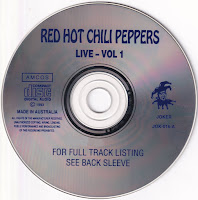