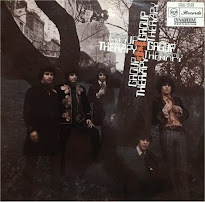 The album, re-titled 'You’re In Need Of...Group Therapy' was belatedly issued in the wake of this interest, but although their version of ‘River Deep - Mountain High’ garnered interest when issued as a single, the set failed to emulate its corresponding in-concert intensity. The band split up without achieving their potential, although Kennedy later secured success as a singer and songwriter. 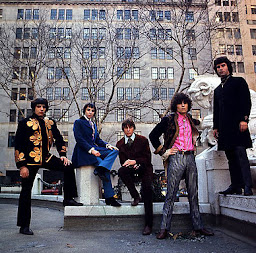 Both albums (recorded in 1967-69) directly refer to the creativity and style of Vanilla Fudge - with a lot of modifications to the luscious sound of Hammond organs and rich vocal harmonies in the foreground. They were in essence RCA's answer to Vanilla Fudge... They even covered "People Get Ready" just like the Fudge...

There music was of the heavy Vanilla Fudge variety, and not apparently memorable. Playing mostly originals, but also a few standards, opening up with Hendrix's "Foxy Lady" among others. A nice guitar driven platter from the 60's

Tommy Burns, lead vocalist in Group Therapy, is a native New Yorker in his early twenties. (ln fact,. all five boys are in the same age category and from the same geographic vicinity.) Hung up on music ever since he first heard Elvis Presley's records of  Heartbreak Hotel and Blue Suede Shoes, Tommy, whose uncle is composer/musician Robert Maxwell, has been playing guitar since he was a child. He entered "show business" at the age of ten in a school play, attended Quintano's School for Young Professionals, performed at the Peppermint Lounge in its heyday, and joined Group Therapy on the invitation of his friend, Art Del Gudico. With Art, or "Tooch" as he is called, Tommy wrote Who'll Be Next, one of the numbers in Group Therapy's debut album. 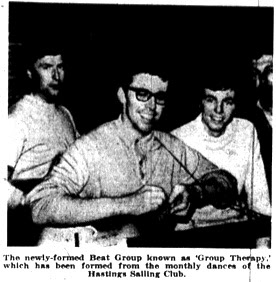 Art Del Gudico is Group Therapy's lead guitarist, in addition to playing bass and singing harmony. Born in Rochester, New York, Tooch has been strumming the guitar, or axe, as he calls it for as long as he can remember, but for the earlier part of his life, music was relegated to second spot after athletics. (In high school, he was active in football, wrestling and track.) He decided upon music as a career while attending the University of Rochester on scholarship, and he made his first professional appearance at Rochester's Four Fourteen Club.

Ray Kennedy is Group Therapy's other singer. He was born in Philadelphia, where his father owned an airport, which probably accounts for Ray's love of flying. He admits to growing up on the records of The Chipmunks, although his expressed musical preferences range from R&B to Gerry Mulligan to Ursula Andress (her lines are lyrical). In addition to singing, Ray Kennedy plays guitar and assorted woodwinds and is "quite adept on cowbell."

Organist for Group Therapy is Jerry (The Kid) Guida. He also plays all the keyboard instruments for the quintet and is proficient on drums and trumpet. The Kid is from Jersey City, New Jersey, and, influenced by his musician father, decided to become a professional musician when he was only eight. He gave his first concert (in school) at the age of twelve where he won a blue ribbon as a trumpeter, joined his father's group two years later, and has since performed in various clubs around New Jersey and New York, in concerts and on television. He switched to organ after being introduced to the records of Jimmy Smith, and played with his first professional group at The Cheetah in New York,before joining Group Therapy. 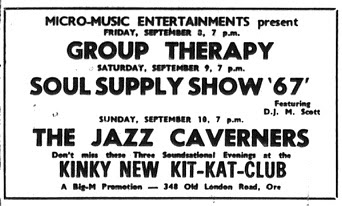 Percussionist Michael Lamont is the Group Therapy show business old-timer. Michael, who hails from Hoboken, was on the legitimate stage from the time he was eleven until joining Group Therapy. He made his debut at New York City Centre in its production of "The King and I," and has since appeared on Broadway in "Oliver," "West Side Story," "Thirteen Daughters" and "Royal Hunt of the Sun." He has also appeared in countless television shows.

This post consists of FLACs ripped from my recently acquired vinyl (another flee market discovery) which is in immaculate condition for its age.  Full album artwork along with label scans are included.

As the album title says folks "People, get ready for Group Therapy" 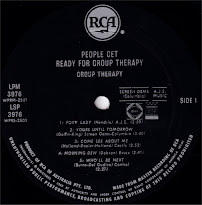