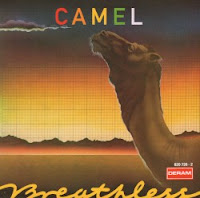 Progressive rock giants Camel had a long-established audience by the late 1970s, and proved it again on 14 October 1978, when they hit the UK chart with their fourth top 30 album in little more than three years, Breathless.

Recorded at the famous Manor Studios and produced by the band with Mick Glossop, it’s a landmark in the Camel story because this was the final album to feature the band’s co-founding keyboard player, Pete Bardens. After co-writing all but two of the songs on Breathless, Bardens departed before the band toured the record. Mel Collins was now in the fold on saxophones, and two keyboard players were drafted in for the tour: Dave Sinclair, who was the cousin of bass player Richard Sinclair, and Jan Schelhaas.
Not the best album that Camel released but Breathless has its moments. Pete Bardens and Andy Latimer didn't get on well during the recording sessions which would led to the departure of Bardens after the album was finished. Only "Echoes" and "the sleeper" still have the Camel trademark which consists of magical duels between the guitars of Latimer and the keyboards of Bardens. Especially "Echoes" would become a concert favourite for the band. These tracks justify the buy of the album for fans of progressive rock. 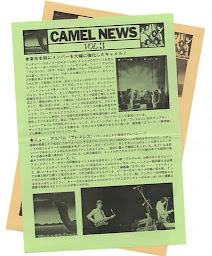 Other tracks tend to late seventies pop although some tracks are still quite enjoyable like "Breathless" or "On a wing and a prayer". "Summer lightning" has some nasty influences form pop and even disco, but the melody is fine and the guitar playing of Andy Latimer is brilliant. Other tracks are forgettable. Usually the weak point in Camel is the vocal but not on this album. In 1977 and 1978 the famous Caravan singer Richard Sinclair was the band lead vocalist and he does a far better job than Andy Latimer could have ever done. Sinclair delivers "Down at the farm" a funny and uplifting song about life in the country, the song has a catchy melody and excellent flute playing of Mel Collins, one of the highlights of the album.

If you are a Caravan fan then Sinclair's influence will be highly pleasing. Breathless arrived when the world hated Progressive music so consequently falls foul of high criticism, however for me it is an extension of Rain Dances and has a beautiful feel to it. Remember these guys were maturing and the music with it. Echoes, Summer Lightning and You Make Me Smile being the main highlights. Vinyl covers were at an all time high and Breathless certainly did not disappoint. Musically though very solid even with Bardens' imminent departure. 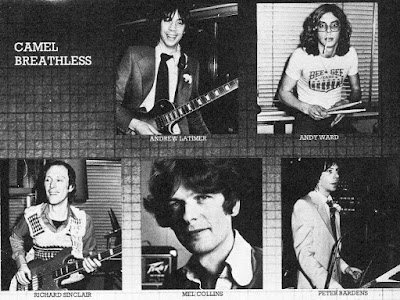 Camel [Liner Notes]
Still proclaiming an identical personnel to that on their RAIN DANCES LP, on the map in September 1977 and then constructed the in-concert potted musical- history-to-date double set, A LIVE RECORD (April 1978), Camel had been undertaking the initial spadework for a new studio album during the early months of that latter year.
Original members Messrs. Latimer, Bardens and Ward were these days fleshed-out by ex-Caravan bassist Richard Sinclair, while the ever-dependable reed blower Mel Collins -- never a full time participant, but always available for recording and touring duties in between his numerous 'session' activities - had readily agreed to arrive as necessary in full cry.
However, the melodic interface between Andy Latimer and Peter Bardens had been progressively taking a turn for the worse, in that both saw Camel's future venturing along differing paths, and whilst in the past this 'rivalry' had contributed positively to the band's sound evolution, during the recording of this latest project - to be billed as BREATHLESS - the undercurrent of friction first apparent during the creation of RAIN DANCES surfaced more fully. In 1981, Andy Latimer recalled events of the period: 'Peter and I always got on well when creating, but the problems started when we came to the actual execution of ideas. In the studio we were just stifling each other. I wouldn't let him get any of his ideas out, and he wouldn't let me get any of mine out, so it became pretty heavy going. We mutually agreed to part company on the creative level. Richard and Andy wanted to stay with me, so Peter went. I think it was a good move for both of us.
This having been agreed, Bardens completed the forthcoming set with his erstwhile colleagues, again their handiwork being a bundle of individual songs rather than following the concept framework which had already featured primarily in their rise to fame thus-far.
If disagreements there were, few outside the soundproofed booths of the triumvirate of establishments which played host to BREATHLESS's recording could have guessed. A superbly accomplished result ensued, with one of Camel's most delightful oddities, Richard's whimsical sound-effect laden DOWN ON THE FARM, sitting comfortably among their more usual demonstrations of instrument virtuosity.
Scheduled for United Kingdom release on 22nd September '78 as Decca TXS-R I 32, it bounded into our then Top 60 on October 14th at No. 26, but exited seven days later and failed to return.
No seven-inch spin-offs were envisaged from within, although a special version of RAINBOW'S END did surface on the maxi-single issued to support the long-player I CAN SEE YOUR HOUSE FROM HERE the next year (U.K. Only). REMOTE ROMANCE and TELL ME were its accomplices.
While he had fulfilled recording obligations on BREATHLESS, all involved knew Peter Bardens (pictured below) would not now be joining the tour bus for an already-booked accompanying lengthy international road promotion. There was never any intention to draft in a Bardens clone, so when Mr. Sinclair suggested the employment of two former Caravan roommates adept on the 'eighty-eights' his cousin Dave and Liverpudlian Jan Schelhaas, the Andys saw bright new horizons opening up and readily agreed. Happily, so did those approached. 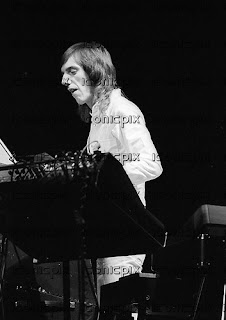 Their nightly crusade was due to begin on September 10th at Croydon's Fairfield Hall with singer/songwriter Michael Chapman as special guest - they were actually performing in Ipswich, Suffolk's Gaumont Cinema on the night of BREATHLESS's unveiling a few days later - and ended its U.K. leg at York University come October 14th, after which mainland Europe was in for a treat right through to December. Next stop, a first taste of Japan, which was such a triumph they were provisionally logging 1980 replay dates before departing, and then off to North America.
Signed to Decca/Deram for the world except U.S.A. and Canada in those days, their previous agreement with the Janus company for those last-named territories had run its course and this latest event was already pacted to a new major. With the boys able to support its appearance via live dates, Arista4206 moved in on Billboards Top 200 come 10th February 1979 and thereafter galloped northwards to 134 during a 10 week stopover. There were smiles all round.
Once home though Dave Sinclair, who had only signed on for the duration, waved adieu, but, more importantly, Richard also called time owing to pressure of touring. Jan was staying put; all wished to pursue the twin-keyboards idea further, so in the summer ex-Clancy, Steve Hillage and Carol Grimes four-stringer Colin Bass came in along with America's own Kit Watkins, once of Happy The Man, who brought his numerous electric descendants of the harpsichord to complete a
dream quintet.
They set about penning new material immediately, and after only a few weeks together way-back-when Andy Latimer stated ecstatically: "It's better now musically than it ever was. We've got the capability, both for more complicated pieces and the power for straight-down-the-line things. The level of enthusiasm has brought the new numbers along very quickly. Recording is fun rather than an effort. The new rhythm section's so tight. It's a joy to play over. We're proud of the stuff we've done in the past and will continue to play it live. We're still distinctly English and like to take chances. The new material sounds more commercial but we only do what we want to do." 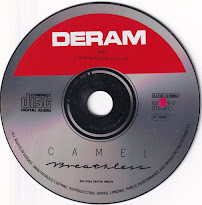 Going the whole hog the boys employed producer Rupert Hine to undertake the role in which they'd recently employed themselves and Mick Glossop, and in October '79 listeners around the globe would be able to share the magic passwords to Camel's next Aladdin's Cave of crotchets, quavers, vowels and consonants by uttering, "l CAN SEE YOUR HOUSE FROM HERE..." [Liner Notes - JOHN TRACY London, 1992]
This post consists of FLACs ripped from my 1992 Deram CD release and includes full album artwork for both Vinyl and CD.  Label scans and all photos featured above are also included, along with one hump of  liquid refreshments !
I quite like this album, and always enjoy good progressive rock / jazz - I think this post will keep you breathless.
.
Tracklist 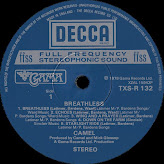 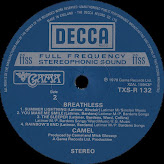