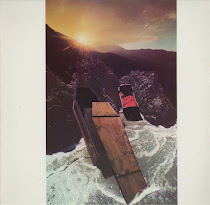 After two solid years of fame and fortune, Iron Butterfly were rapidly losing ground in the rock and roll sweepstakes. The band had been unable to sustain the massive success of their 1968 sophomore offering, the legendary In-A-Gadda-Da-Vida, despite releasing the rock solid Ball in 1969.
In 1970, Iron Butterfly issued a stop-gap live album that, of course, featured another lengthy rendition of "In-A-Gadda-Da-Vida," a move which hinted at a lack of direction. Countless bands had followed Cream and Jimi Hendrix down the hard and heavy path, with Iron Butterfly among the first to venture there. For whatever reason, however, they were unable to capitalise on the preferred heaviness of the era.
Just a few months following the release of Live, however, Iron Butterfly burst forth with a new LP titled 'Metamorphosis' on Aug. 13, 1970. In keeping with the title, this project found Iron Butterfly trying to re-invent themselves. Perhaps more to the point, the band was concentrating on fine tuning their own strengths.
Metamorphosis begins with a short atmospheric piece, "Free Flight," which is really just a lead in to the driving "New Day" – not only a perfect album opener, but a mission statement of sorts for the band at this juncture. "Shady Lady" is a fairly lame, somewhat funky number that's best left forgotten at this point. A quick rebound comes in the form of "Best Years Of Our Lives," with its kick ass guitar and keyboard workouts.
"Slower Than Guns," a beautiful acoustic-based ballad focusing ecological perils, is very much of its time and place – yet listening to it decades years later, Iron Butterfly's theme still rings true, both lyrically and musically. Ditto for "Soldier on the Town." Meanwhile, "Stone Believer" is a heavy groover that, like much of Iron Butterfly catalog, deserved a better fate than being a forgotten album track.
Iron Butterfly wraps up things with another lengthy workout in the form of "Butterfly Bleu," a song that gets into all sorts of dynamics along its nearly 15 minute path before turning into gimmicks and nonsense. Eventually, the track rebounds from these meanderings, but by then it's too late.
Metamorphosis became the band's fourth straight Top 20 album, but remains the last to do so. It was, alas, no In-A-Gadda-Da-Vida – a complaint that forever hung around Iron Butterfly's collective neck.
[Extract:  'How Iron Butterfly Reinvented Themselves With 'Metamorphosis' |    DAVE SWANSON Published: August 13, 2015]
Album Review 1
(Review by Prog Sothoth)
1970 was like a dark amorphous cloud that roamed across the musical landscape seeking out rock bands singing about flowers & beads to absorb, consume and spit out the bones. Iron Butterfly saw the cloud approaching, and weren't going down without a fight. The cloud did eventually win, but the Butterfly's attempt to undergo metamorphosis was nothing to be ashamed of and in retrospect they released a pretty solid piece of work that deserved more notice, considering the band was one of the biggest selling acts in the game just two years prior. 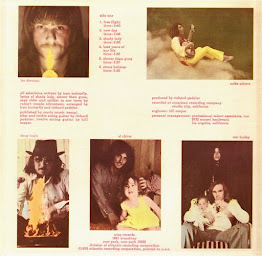 With this effort, Iron Butterfly ditched the fuzzy guitar tones and embraced a funkier and bluesier approach to rock music, basically following the tide so to speak. There's a bit of Grand Funk, a sprinkle of Three Dog Night, some lingering tripped-out acid rock and Doug's mighty baritone telling us that shady ladies are cool. His voice has improved technically and suits the music well. The man is absolutely drenched in soul, sounding like a more earnest and less obnoxious Michael McDonald with no fear of rockin' out.
Musically the band is pretty tight, and the production values for its time sound crisp and surprisingly stellar. These dudes may not have been the big cheese anymore, but they still had a sweet budget to lay down these tracks. There's no real "hooky" tune to latch onto as a potential big single release, but what's bad for the casual rock fan can be good for the prog fan as there's some interesting things going about this disc musically. A song like "Shady Ladies" shouldn't be as complex as it is, but...there you go. In fact, I really dig this tune with its cute keyboard ditties & surprising shifts from happy grooviness to haunting space rock and back again. 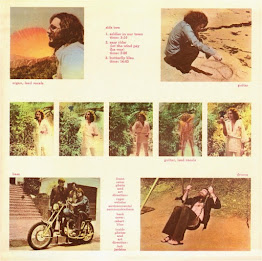 The opening main track "New Day" (after a silly intro) sounds like a sort of Steppenwolf number, which isn't a bad thing, but keep listening, and eventually you'll get to some 'out there' music, especially the final juggernaut "Butterfly Bleu". As a long track, it doesn't meander too far away from the rest of the album's overall arch, but man at one point things do get pretty weird with the goofy vocal chants, mumblings and interactions with a guitar voice box whining "help me!" It's silly and dated, but fun as a one-off listen.
Metamorphosis requires a few listens to get into (at least for me it did), but if you're not looking for something too progressive but with talent and some great manly vocals, this bugger may do the trick.
Album Review 2
(Review by aglasshouse)
Every time I've seen Iron Butterfly's history, their profile has a whole, and the music they've created, I've always thought of them as steadfast. In-A-Gadda-Da-Vida, for all intents and purposes, should not have been as successful as it was. An 18-minute long acid trip jam? Many others at the time tried to achieve the same thing and failed, but these Californians somehow managed to turn such a product of the times into a product that stands the test of time (and made a boat-load at that). Something as miraculous as this is hard for anyone to followup, let alone a half-stoned shit rock band like Iron Butterfly was. They managed it though, the following album Ball (1969) charting even higher than it's predecessor in the U.S.
Iron Butterfly managed to make magic happen twice. I guess the obvious question that should and was asked was: "can they do it again?" Yes and no. 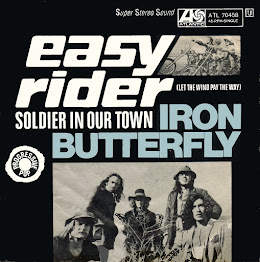 There's a difference this time around. Metamorphosis, released the following year after Ball, charted at 16 in the U.S. Now, in any other circumstance this would be laudable, because obviously it's not easy to whip up a record that charts in the first place. But for Iron Butterfly, this was practically dismal. Granted, 'Easy Rider' did chart 66 on Billboard, being I.B.'s biggest hit since 'In-A-Gadda-Da-Vida', although I personally owe this more to the success of the latter and name recognition as opposed to song quality (who knows, the 70's were easily pleased). So, financially-wise, Iron Butterfly were sort of able to hit the gold once more. However, musically-wise, Metamorphosis is different from all of it's predecessors, even including Heavy.
What I was saying about Iron Butterfly's seeming fragility comes into play here, because the band slowly started going downhill after their monster-hit, and Metamorphosis was the last album regarded at least decently by critics. On this particular album, the original line-up is broken, with guitarist Erik Brann parting ways due to band conflicts. Replacing him, flatteringly enough, was four different session guitarists. Mike Pinera of Blues Image and Alice Cooper (as well as Ramadam, a supergroup formed with Mitch Mitchell of Jimi Hendrix Experience), Larry Reinhardt (future Captain Beyond along with Dorman), Bill Cooper, and even producer Richard Podolor on the twelve-string.
Metamorphosis is really the culmination of Iron Butterfly's slowly building up musical consistency since In-A-Gadda-Da-Vida. This applies for musicianship (because honestly they weren't the greatest players), production, and songwriting. The production is much higher, and allows for a more dynamic sound in both the experimental and traditional departments. Speaking of experimental, critics tend to refer to Iron Butterfly post-Vida as being more and more musically adventurous, and I would tend to agree. Metamorphosis puts a much greater emphasis on the progressive/space rock side of the band, something I've always found remarkably endearing when it comes to them in particular. Mostly this is on the smash epic 'Butterfly Bleu', a masterpiece of proto-metal and prog music that rivals even I-A-G-D-V (except is much more structured and, dare I say, intelligent?). Still retaining a spaced-out, pseudo complex attitude, 'Butterfly Bleu' manages to be heavy, emotional, and eclectic all in on package. It also funnily enough features one of the earliest uses of a talk-box (yeah, that thing Bon Jovi used on 'Livin' On a Prayer' to make his guitar go "rwoworwowrwow") during a gritty section on the latter half of the epic.
Of the traditional we have 'New Day', a Steppenwolf-esque song headed off by a disarmingly good catchy riff. 'Shady Lady' is, at times, your standard brand of funky blues-rock, but it delves into extremely dark tonal shifts at certain areas. The rest of the album is rather expected of Iron Butterfly, being basically cheesy rock n' roll tunes molded by quasi-hippie zeitgeist ('Soldier In Our Town'), but I suppose the big single 'Easy Rider' has it's moments as well.
The band itself does very well for itself on this particular album. As aforementioned, four different multi-talented guitarist make themselves well-known on Metamorphosis. Mike Pinera's (presumably) part on 'Butterfly Bleu' with the talk-box always makes me smile ever time I hear it. It really makes the song have a bigger personality (of course his vocals on the rest of the song is good as well, putting on a zealous, emotional performance). The Iron Butterfly themselves are nothing to scoff about of course, But it's clear that the talents of Ingle, Dorman, and Bushy are not without merit. The band's made their abilities clear ever since 'Vida' in '68, and here they meld almost perfectly with their session musicians.
Some may get turned off by Iron Butterfly's material, but for me Metamorphosis is nothing short of a wonderful surprise. People wanted the Butterfly, and they got the Butterfly.
This post consists of FLACs ripped from my vinyl copy. Although I have this album on CD, I decided to rip my vinyl instead because I still think the progressive/space rock sound of the 60/70's is best heard from the media it was originally released on, warts and all, typical of this medium (crackles & pops).  In this case, my copy is in excellent condition, so you won't be disappointed.
Full album artwork and label scans are included along with all featured photos.
I love this album because it has essences of the classic 'In-A-Gadda-Da-Vida' sound mixed with some more mature progressive sounds, but also because I'm a big fan of Captain Beyond and the connection between these two bands is extensive.
Track Listing: 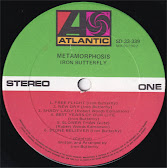 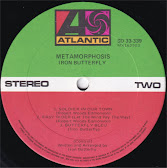