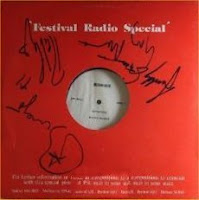 This month's WOCK on Vinyl post is a rare, OOP Festival Radio Special Promo to advertise Skyhooks' Guilty Until Proven Insane album.
Released in 1978 on beautiful rich red vinyl, Festival compiled and released this album to radio stations for broadcast. Included with the pristine vinyl is the original rundown sheet, which has since been marked up. If that wasn't rare enough for you, this album has been autographed by members of Skyhooks, including Greg Macainsh, Bongo Starkie, and Freddie Strauks, among others. 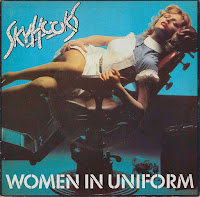 Their fourth effort, "Guilty Until Proven Insane" from 1978  saw Skyhooks sporting a heavier sound and more thinly veiled biting social commentary than ever before. It also spawned the band's monster hit, "Women in Uniform". I consider this the band's finest hour and despite a few mediocre tracks, the album is absolutely fantastic.  And if you don't agree with me, just have a listen to track 9 (literally)

The album marked the departure of founding guitarist, Red Symons, who was replaced by future Angels axeslinger Bob Spencer in 1977. When their subsequent tour reached its end, Shirley also departed, leaving the band in creative limbo. The band sensing there was still unfinished business to tend to, drafted Tony Williams to take over vocals, resulting in a total overhaul in the band's signature sound. The subsequent release, "Hot For the Orient" in 1980, failed to match the band's previous success and audiences were quick to reject the band's attempt to continue on. By the end of the year, Skyhooks were history.

Over the next two decades the band would reform sporadically for one off shows and abbreviated promotional tours, all with great success in their homeland. In 2001, Shirley was killed in an air crash, prompting a memorial concert the following month that would set a precedent for Skyhooks. Various members past and present participated in the event marking the first and last time an expanded Skyhooks lineup would be featured on the same stage. Another performance took place in 2004 to commemorate the 30th anniversary of the band's debut album, also prompting high profile media coverage. The band's most recent activity took place in 2005 to benefit Greg Hill (guitar), who was battling cancer.
. 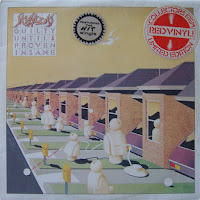 There's an old adage in the record biz the first two albums you've got years to write, the third is the watershed, by the fourth you know whether a band's gonna continue, and generally, in what form. That adage is helpful in evaluating 'Guilty Till Proven Insane'. The first two 'Hooks LP's were written over a period of years, and mumma! what a bonus that was to the publisher who signed them up as young, undiscovered talent. Those first two LP's are still the largest selling Australian albums ever.
By the third, 'Straight ln a Gay Gay World', Macainsh had used the best of his backlog and his new material was often skittish and unresolved.

For every fully formed song like "This Is America" or "Crazy Heart", there seemed two song ideas seemly awaiting proper form, eg. "Straight In A Gay Gay World" or "The Girl Says She's Bored".  Still even that album had another 'Hook's trademark -a sort of thin-blooded, high-pitched nervous energy that got them through. 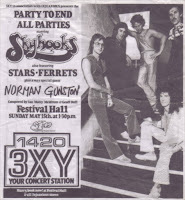 Then guitarist Red Symons left, Bob Spencer joined and after a not very marvellous single, "Party To End All Parties", the Hooks settled down to a long grind of pub gigs and small halls. Over the months they moulded into a performance-minded outfit that seemed more of a traditional power-rock outfit than the theatrical, satirical group that could rock they'd earlier seemed.

This is where 'Guilty Till Proven Insane' finds 'em. The performance importance of the band is emphasised by the change in producers. Under Ross Wilson the band performance was mostly directed to highlighting various key lines or illustrating the song concept. Under American Producer Tommy Leonetti, the idea is to present the band roaring and raging. And they are. For the first time ever drummer Fred Strauks is presented as the beefy wristed thumper he really is. Macainsh goes for straighter more Powerhouse bass lines than the idio syncratic directions previously. 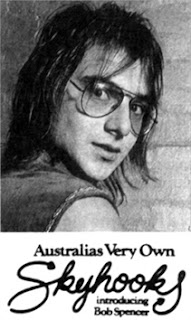 Guitarists Spencer and Bongo Starkey revel in power housing off each other where the precious Symons/Starkey line up was more concerned with constructing jagged harmony lines. 'And this time round, Shirley Strachan eschews his usual Smart-arse/Little Boy Innocent axis and settles into delivering with traditional rock singer power. Yes, it's quite a performance from Strachan, and from the band.
There are places, like in "Meglomania" where the band explodes like a dynamited brick wall and Shirley roars through the fallout like a sonic matter-destructer.

Same goes for "Bbbbbboogie". Freddie Strauks song that once upon a time sounded like a send up of the form but under Leonetti turns around to become a raucous example of it.
Even when they slow the pace to a calyso feel on "Twisted Innocence", the band are champing on the beat, unleashing a serious barrage of rocksound. Someone said when hearing Women In Uniform "Jesus, they're not writing the song anymore". Which is just another way of saying the Hooks don't sound like they used to. 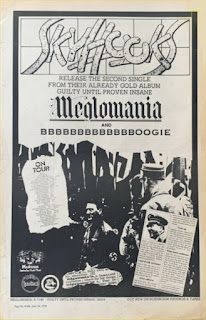 The change in musical style is best illustrated by "Point In the Distance" a shimmery musical  creation that has Macainsh narrating the part of a robot in a futuristic cybernetic love story. The lyrics probably won't inspire Philip K. Dick's retirement though.

Of the material most in the Skyhooks' trad. mould, "Life In The Modern World" is the most well crafted. The music is concisely arranged and there's a clever development of the lyrical motif:
(When the sky meets the earth/that's the skyline . . . where the needle meets the skin/that's the mainline/and when today meets tomorrow/that's the deadline) All this plus a spirited call/response middle eight, and a lurching demented beat.

Then there's "Trouble With The Computer", performed powerfully, but the lyrics push the thought relentlessly till the whole point is blunted. In fact there's a fear here that Macainsh is starting to be a little harried by his own reputation as a social commentator.  The first two albums had songs polished to a relaxed conciseness, the songs here are often over-wordy and pushing for lyricist points instead of letting them either develop at their own pace, or make no point at all. 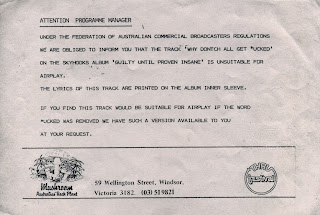 "Why Don't You All Get Fucked" for instance is a basic aggro song tied in with three social worker case histories. Only thing is, the case history section is virtually extraneous to the overwhelmingly important point of the song. aka: WHY DON'T YOU ALL GET FUCKED!!!


That's the interesting schism point in Skyhooks now-the balance between rock-band performance and song ideas. Funnily enough, previously the Hooks' tension point was the balance between being an ideas band or a rock-band.
ln the Hooks overall scheme of things, 'Guilty Till Proven Insane' is an affirmation of their status as a rock band who can deliver the goods in forthright fashion,

Note the disclaimer notice above that was included with the Promo disk for program managers to request a censored version of "Why Don't You All Get ......"   I'm sure most of them declined the offer.
This post contains both versions.
.
This post consists of FLACs ripped from a vinyl promo (a big thank you to Sunshine for providing this rip) and whatever artwork was available on the internet - mostly eBay.  Each track starts with intros and interviews with band members There are also scans of promotional materials included (Cue Sheet, Disclaimer) along with label scans and the RAM review presented in this post.
This post ticks the Obscure category this month, as copies were only distributed to radio stations and most promotional materials given to Radio Stations usually ended up in industrial waste bins..
To complete this rare find, I am also including two YouTube videos that I stumbled upon while researching this post, which present an intriguing insight into the making of the album. Plenty of band banter and humour make it compelling viewing. 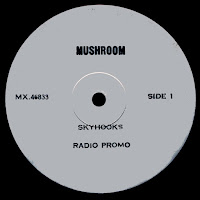 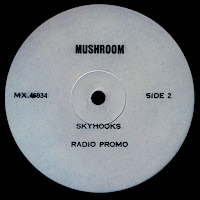