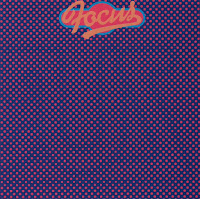 Focus is a band I have always admired. They have a way of delivering calm orchestral yet stunning and sharp pieces of music, as well as simple acoustic songs. Focus is a Dutch rock band, founded by classically trained organist/flautist Thijs van Leer in 1969, and is most famous for the songs "Hocus Pocus" and "Sylvia".


In 1971, the group released 'Moving Waves', which brought the band international acclaim and a hit on both sides of the Atlantic with the radio edit of the rock rondo "Hocus Pocus". This rock classic consists of Akkerman's guitar chord sequence used as a recurring theme, with quirky and energetic interludes that include alto flute riffs, accordion, guitar, and drum solos, whistling, nonsensical (Dutch) vocals, falsetto singing, and yodeling. 'Moving Waves' album established Thijs van Leer and Akkerman as composers who could appeal to progressive-rock album listeners (a large audience in the early 1970s) and radio single buyers.


However, one must not disregard their first release, initially called "Focus Plays Focus", but was later changed globally to "In And Out Of Focus". Worlwide there were 4 different covers, and the track list changed also on several editions. The CD reissues would finally include all 8 tracks, only found together before on Polydor/Sire LP editions. My Polydor copy was released in 1973, but sadly contains only 7 tracks, missing the single taken from album called "House Of The King". I have however rectified this in the post provided.
.
Knowing what Focus have accomplished (Hocus Pocus, Hamburger Concerto), it's really amazing to hear this album, because I don't hear many hints at their future ability to write concise rock or to create delicate, intricate prog, though there are notable exceptions. Uneven, at times uninspired, and in a few cases goofy, In and Out of Focus contains a fair amount of genuinely good music, but don't expect to hear a monumental statement regarding the potential of Focus. 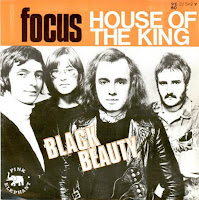 "House of the King". This is the only real prog song on the album, and while short (under three minutes), it's a great example of the uniquely Focus sound. We've got a bouncy, medievalish melody, foot-tappingly played by flute, guitar, and accentuated by handclaps. I can picture dancing in the village square to this!

"Anonymous" and "Focus (instrumental)". Here Focus loosen up a bit and decide to throw down some great jam-rock. They really seem to be comfortable here, and the music reflects it - fun, at times virtuoso, and not too extended. The bass seems more lively here than in future Focus, which is most welcome. Both songs begin with melodies introduced in other songs and build to very satisfying crescendos, laying down some memorable grooves along the way.

The rest... There really isn't much else of import on this album. Some of the songs remind me of a mellowed-out Syd Barrett--similar vocals and playful style. The most bizarre is "Sugar Island": this Castro makes the poor man rich, he makes the powers fail, followed by some 'daba-daba' scatting. Needless to say, none of it really works, though "Why Dream" does have a great guitar solo to look forward to.

Worthwhile for Focus fans, but probably passable for those just getting into the band. I strongly recommend Moving Waves or Hamburger Concerto before In and Out of Focus.
. 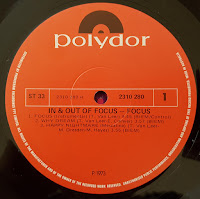 This post consists of FLACs ripped from my near mint 1973 vinyl release and includes full album artwork for this and previous releases, plus label scans.  As mentioned, I have also included the missing single "House Of The King" as a bonus track to make this post complete (ripped from vinyl).
If you haven't heard this album then it is well worth doing so, and is an essential album for fans of the band, as it is a wonderful illustration of their beginnings. Enjoy.
.
Tracklist
01 Focus (Instrumental) 9:39
02 Why Dream 3:54
03 Happy Nightmare 3:59 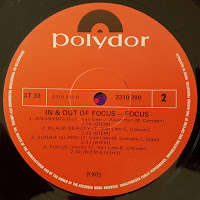