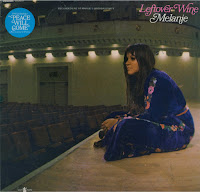 Melanie Safka was born on February 3rd 1947 in New York. Her mother was an Italian-born jazz singer. She grew up a shy girl with a great interest for music, so she taught herself how to play the guitar and started to write songs and poetry. She says: "I had a hard time getting on with people at school. I was very much alone. I was writing, and playing, and singing and falling in love with everybody, but mostly not telling them."
After studying acting at the American Academy of Arts, Melanie played major professional roles in productions of Alice In Wonderland and The Glass Menagerie.

While hoping for an audition for a part in Dark Side Of The Moon, she stumbled into the wrong office. An executive lurking behind a large cigar noticed she was toting a guitar, asked if she could sing...and Melanie went home with a recording contract in her handbag. 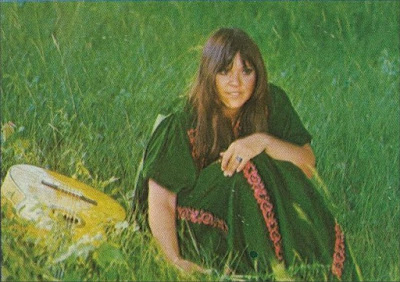 The producer of the young Buddah-label Peter Schekeryk got interested in this somewhat dreamy girl when she sang her ideas to him. Together, they recorded her debut-album "Born To Be" in 1968. But only after her performance at Woodstock in the pouring rain, Melanie suddenly had a cachet. Her first LP was re-released and she was awarded with a number 6 hit in the USA in June of 1970 with "Lay Down (Candles In The Rain)", performed with the Edwin Hawkins Singers.

Later in 1969, Melanie had a hit in the Netherlands with "Beautiful People" and at the end of 1970 Melanie had a UK No. 9 hit with her version of the 1966 hit by the Rolling Stones "Ruby Tuesday".

On June 13, 1970, Melanie took to the stage of New York’s Carnegie Hall. This was the first of her historic appearances there. The concert was recorded for a live album by running lines from Carnegie Hall on West 57th St. to Allegro Sound Studios on West 51st St. That live album, released later that year was called “Leftover Wine” [Wikipedia].

The following was a press review of the show from Billboard June 27, 1970

MELANIE: Carnegie Hall, New York
Demonstrating that high decibel levels aren't prerequisites for a capacity hall, Melanie and her special guests, Brewer & Shipley, performed a one show sellout concert last Saturday evening at Carnegie Hall. N.Y. With tickets at a $5.50 top there was an approximate gross of $10,000.

With a loyal following behind her, Melanie's performance personifies the lyric line of one of her songs, "if I had my dream, I'd build a hall and bring everyone together." That's exactly what she does, for over the course of an hour and a half Melanie's reliance and exuberance, musically and personally, served at a unifying force that culminated with her being surrounded on stage by her fans.
Her forte lies in her vocals, and to say that she is unique would be a gross understatement. Ranging from a little girl like whine to a powerfully full and pure voice, she is the possessor of numerous vocal tricks and a wide range.

The concert was strange and upsetting and very brilliant. Melanie sang about loneliness and alienation with an emphasis and involvement that were often hard to bear. There was a strong note of hysteria in her singing which made a jarring contrast with some of her more optimistic lyrics. But she did not have to be consistent; her talent is in expressing emotion and not rationality. Emotion: tension and pain and isolation. Melanie works in extremes, and she forced her listeners to feel in extremes. It was always effective. It was not always fun. 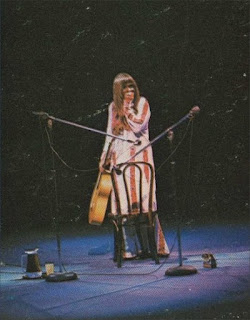 When Melanie came back on stage to do an encore, several hundred of the audience climbed to the stage, all crowded very close together, very quiet. The communication was immediate, with no barriers. Everyone was a part of it.

The concert was being taped for a future Buddah Records "live" album. Maybe the cover photo will show the stage of Carnegie Hall covered with people, and in the centre, Melanie, surrounded and alone [by Nancy Erlich, sourced from Melanie's Facebook]
.
Concert Review:
The fragile-to-hysterical voice of Melanie charms and alarms us with a set recorded at New York's Carnegie Hall last year. After her rather shaky opening number, "Close To It All", she admits to being nervous and feeling that everyone in the audience she has known at one time or another.

Her second number, "Uptown and Down", is about being in New York and she sings this with much greater drive and gets big applause.

Her following piece Mama Mama, starts quieter, with more of her acoustic guitar, as she sings about her life.

The "Saddest Thing" is a wistful ditty about the final goodbye from the one you love; and "Beautiful People" about humans of today and their shortcomings. 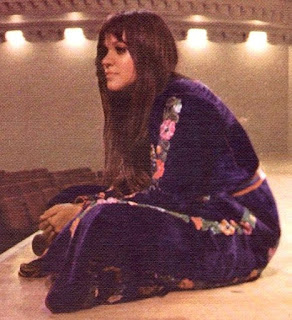 The first half ends with "Animal Crackers", an amusing song in which she induces audience participation.

Side B kicks off with an animal r
ight's song. Apparently, while in Columbus, Missouri, Melanie met a cow which bleated "Moo-lanie," probably because she doesn't eat meat, so she wrote "I Don't Eat Animals"

A short "Happy Birthday"salute to Margie English, a journalist, is followed by "Tuning My Guitar", a song about entertaining.

"Psychotherapy" is sung to the tune of America's "Battle Hymn Of The Republic", with "glory glory psychotherapy, glory glory sexuality" substituted for the original words. A tongue-in-cheek song, which gets quite risqué, it gets her biggest applause; indeed the acclaim takes a little too much playing time!

"Leftover Wine" is a tender song about being left alone after a party, with no one there to drink the leftover wine with her. Melanie sings this quite powerfully, with her always insistent acoustic guitar adding emphasis. 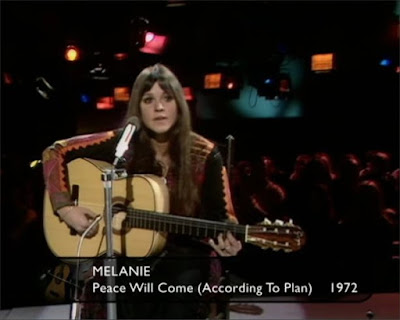 Her final song (they are all written by her) is her former single hit in America and has been added to the LP "Peace Will Come", an earnest hope for the end of hostilities.

Another excellent album from this thoughtful, tuneful artist [extract from melaniemusicsociety]

Liner notes:
As the concert drew to an end and the audience began to fear that each song would be the last, the flood began. Shadowy figures in beads and fringe flowed down the carpeted aisles of Carnegie Hall. They swirled onto the bright stage eddying silently around the singer hunched over her guitar. Few of them touched her. One gave her beads for her hair. Another wept and whispered, "Don't leave us". Long ago she had told them, "You gotta get close to it all", and they had left their isolated seats and came down the aisle for that purpose - simply to be close. She drew strength from them and sang on until she had no more songs. When she rose to leave some of them embraced her, and tears were exchanged.

Hands reached from cuff linked sleeves and pulled her backstage where people who handle her business arrangements congratulated her on a good night's work. Wine was served.

What happened on the stage that night was too delicate an event to register on magnetic tape. For those of us who were there, the sounds on this record can only remind us of what was felt. We all have to share the Leftover Wine.
. 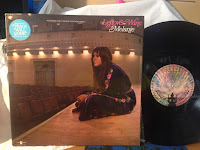 This post consists of MP3's (320) ripped from my Buddah LP and includes full album artwork for both Vinyl and CD. Although not her greatest release (that award goes to her studio album released in the same year - 'Candles In The Rain') this live album is not known well but deserves a place in my record collection for nostalgic reasons.  I have taken the liberty of chopping out some of the extended applause recorded on Side B which I found quite annoying, particularly from "Psychotherapy".
I also had to apply some 'click removal' to mask the inevitable surface noise that is more noticeable during the quieter passages.  Melanie was one of my favourite female singes while growing up as a teenager and was one of the few artists that my mother liked at the time.  This one is for you mum and I always think of you when I hear Melanie's beautiful voice.
.
SIDE 1 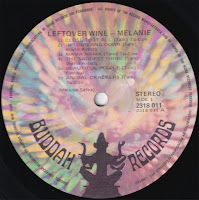 All tunes written by Melanie Safka except Psychotherapy which is Public Domain.
Produced and Directed by Peter Schekeryk
Recorded Live In New York at Carnegie Hall
*except "Peace Will Come" (Studio Track) 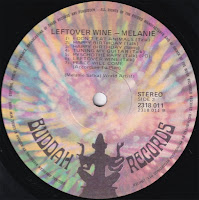