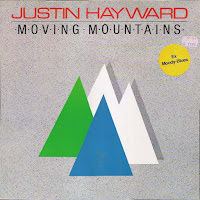 While not the only lead vocalist  in The Moody Blues, Justin Hayward is the most recognisable. His silky smooth voice can be heard on nearly all  of their hits including “Nights In White Satin,” “Your Wildest Dreams,” “Tuesday  Afternoon,” “The Voice,” and many others. One of Rock’s finest front men, Justin  Hayward has also released a handful of fantastic solo albums over the years  that have come and gone without much notice by commercial audiences.  That is definitely a shame since Hayward  always has something interesting to say and he has a lovely way of saying it.  Proving that he could write massive hits outside of the Moody Blues, Justin hit the Top Ten globally in 1978 with "Forever Autumn" – created for Jeff Wayne’s ‘War of the Worlds’ album. 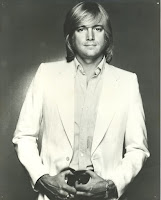 'Moving Mountains' (1985) was his third ‘solo’ album (fourth if you count the 'Blue Jays' project with  fellow Moodies member John Lodge)  and features a fine batch of Hayward tunes that recall his past, present and  future.  The album, released a year  before The Moody Blues made their big commercial comeback with 'The Other Side Of Life', definitely sounds like the same work of the man who  penned so many fab tunes in the ‘60s and ‘70s yet the production is rooted  firmly in the ‘80s. Not as wonderfully bombastic as the Moodies’ albums of the  era, the album doesn’t sound far off from what Chris Rea and other like-minded artists were attempting to do at  the time – write great songs and present them in a way that would appeal to a larger audience.

Some have written that 'Moving Mountains' sounds dated. In  all actuality, the album is not as slick as some of the albums released in  1985. More importantly, the album’s production  never interferes with the excellent songs on display. The majestic “Silverbird”  was co-written by Jeff Wayne, who  some might remember as the man responsible for “Forever Autumn,” the Hayward-sung  hit from 'War Of The Worlds'.  “One Again”  stands as a fine album opener.  “Moving  Mountains” is a wonderful tune. “Lost And Found” possesses a lovely melody and  a great vocal from Hayward. (Have I already said that this guy is one of Rock’s  finest vocalists?) “Is It Just A Game” is cut from the same cloth as “Your Wildest  Dreams” and “The Voice”. Overall,  the album is relaxed and uncluttered. Anyone wanting to hear the Moodies should buy a Moodies album. 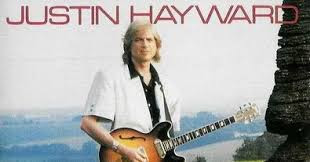 However, if you want to experience Justin’s singular musical vision, 'Moving Mountains'  is just one of many places to start.

Hayward's Guitars
For the most part, Hayward has used a red Gibson ES-335 ("main axe"), though he also uses other guitars in both performing and recording, including a 1955 Martin D-28 "Dreadnought", a James Olson six-string acoustic, a Black Guild acoustic, (mock) Squier Stratocaster, Fender Telecaster, a blonde Guild open-tuned 12-string acoustic and a 12-string Gibson acoustic (for "Question"), and in 1967 a black Les Paul. Between 1965 and 1968 he was without his Gibson 335 and relied on other instruments, most notably a 1964 Fender Telecaster and a hand-built 12-string guitar he had renovated for Donegan (he eventually bought this guitar from Donegan's widow).

However, in an interview that is included on the "Lovely to See You Concert" DVD (2005), Hayward says the 1963 Gibson 335 has been with him since 1967. Recently he has played a Collings D3 on stage and on recordings . Among other instruments, Hayward also played the mandolin on A Question of Balance and the sitar on "In Search Of The Lost Chord". 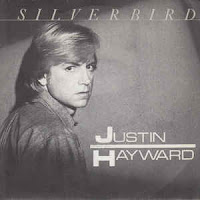 Liner Notes
This album started for me in 1980 with "Goodbye". The song that is, when my friend Eric Stewart (10 CC) and I were sitting in his studio one night wondering what to do with some time after a session, so, we recorded the basic track to "Goodbye".  I finally finished the LP five years later with the single "Silverbird" and along the way worked with many friends and had lots of fun. I recorded each track whenever I felt I had a song that would contribute to the whole. Some, like the basic title track of "Moving Mountains", my own personal favourite, were recorded at home, in my own time.. Others like "Who Knows" and "The Best Is Yet To Come" were made in one huge orchestral session in a couple of hours. Those two songs brought a reunion with my dear friend Peter Knight, the greatest British writer and arranger for strings I have ever heard. 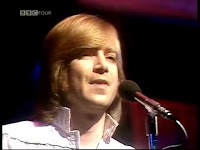 "One Again" with Tony Visconti was a wonderful learning process for me in the technology of recording, quite the opposite of "Is It Just A Game?" where we just set up in the studio and let it rip. Every once in a while you write a song that just falls into place and expresses perfectly what you wanted to say. "Lost And Found" was one of those songs for me, and every aspect of it, the writing, the recording, the mixing and mastering, were a pleasure, but then every song on this LP was a true labour of love. Through this album I became a keyboard player as well as a guitarist, and engineer as well as a recording artist, your part is easy. Just sit back and ... well ... happy listening. [written by Justin Hayward]

This post consists of FLACS ripped from my newly acquired Vinyl which I found in amongst a pile of beaten up Moodies LP's at the Flee Market (which I already had thankfully). To my surprise, this album was in pristine condition and looked almost brand new.  I have of course also included full album artwork for both CD and vinyl along with label scans.
To sweeten the deal, I am also including Justin's big 70's hit "Forever Autumn" (ripped from my single) which in my opinion was his swan song.  Don't get me wrong, his Moodies material was great but I think Jeff Wayne's production and writing skills took him to an even higher level.
Hope you enjoy this lost treasure
. 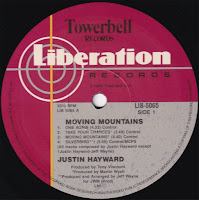 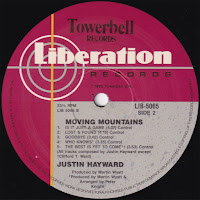