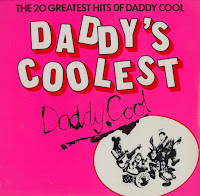 Wayne Duncan, Ross Hannaford, Ross Wilson and Gary Young formed Daddy Cool in 1970. All shared a love of 1950s music and initially played covers of songs from their record collections. One of these was "Daddy Cool" (written by Bob Crewe and Frank Slay) performed in 1957 by US Doo-wop band The Rays as the B side to their single "Silhouettes". Daddy Cool became a popular live fixture in Melbourne.
Their early 1971 appearance at the Myponga Festival in South Australia upstaged their parent group, Sons of the Vegetal Mother, which subsequently dissolved.

Daddy Cool may have been a colourful bunch of characters but their cartoon-like façade belied their collective musical experience and acumen.  It was the combination of the group’s feel good vibe and their songwriting and musicianship that really made them click.  Although group leader Ross Wilson may have sometimes chafed at Daddy Cool’s sillier aspects, more ‘serious’ projects like Sons Of The Vegetal Mother fared comparatively worse – despite having a similar or better group of musicians – because they lacked a lighter touch.  Daddy Cool rediscovered the joy and innocence of the earliest days of rock ‘n’ roll and imparted those qualities to their best recordings.  Daddy Cool ‘were highly theatrical and animated [and] shook up the Australian concert scene.’  ‘On stage they provided a dance-able sound that was accessible and fun.’ 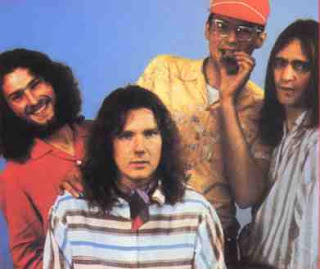 Daddy Cool plays rock ‘n’ roll in its purest form.  They all ‘share a love of 1950s music.’  Vocalist Ross Wilson says, “We were revelling in the joy of that early doo-wop music, and revisiting some of the things we’d heard when we were kids.”  (In the 1950s, ‘doo-wop’ was a kind of early rock reliant on multi-part harmonies – mainly because they couldn’t afford a large backing group.  Accordingly, it was common for a deep-voiced ‘Mr Bass Man’ to repeat nonsense syllables – like ‘doo-wop’ – in place of a bass player while his compatriots’ vocals substituted for guitars or other instrumental colours.)  Daddy Cool ‘combine great musical strength, honed by years of experience playing around the traps, with an irreverent and ebullient stage presence.’  Daddy Cool is not the only 1950s revivalists.  Nostalgia for the early days of rock ‘n’ roll seems to be in the air.  At the same time in the United States there is the comical Sha-Na-Na and the more serious Creedence Clearwater Revival. 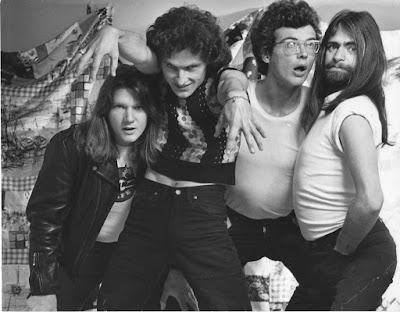 Vocalist and guitarist Ross Wilson becomes the leader of Daddy Cool.  He is nicknamed Ross ‘the Boss’ Wilson.  “It’s Ross’ baby,” acknowledges guitarist Ross Hannaford, bowing to Wilson’s leadership.  Ross Wilson states, “I see myself as sort of like the flagship, my voice is out front.  I’m powering it, you know.”

Guitarist Ross Hannaford’s ‘distinctive baritone voice’ provides contrast to Ross Wilson’s higher vocals.  Hannaford is also an accomplished guitarist turning in consistently engaging work.  There is a ‘Zen quality’ in his guitar playing.  Bassist Wayne Duncan says of Hannaford, “He was the Salvador Dali of Australian rock.
[Salvador Dali is a notable surrealist artist.]  Everything he did, he did his way.  Every guitar he had, he would adapt and change – he’d paint over it and make it a Ross Hannaford, an art object.”  Daddy Cool comes along in Hannaford’s last year of teacher’s training at RMIT art school.  For all his skills, Ross Hannaford says, “I enjoy myself most as the second man, giving support to the main guy.”  Hanna is ‘gangly and rather goofy looking.’ 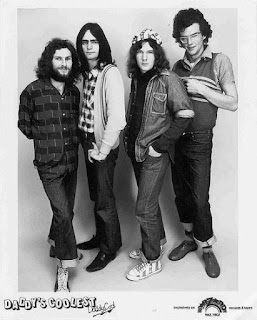 Over the years 1975 to 1993, the musical legacy of Daddy Cool is kept alive by compilation albums and re-releases.  The first of these is the 1975 EP ‘The D.C. Hits EP’ put out by Wizard.  (All recordings mentioned in this paragraph are on Wizard unless otherwise indicated.)  This is followed by ‘Greatest Hits’ (1976) (AUS no. 52).  ‘The Missing Masters’ (1980) assembles the three tracks recorded in 1974 – ‘All I Wanna Do Is Rock’, ‘The Boogie Man’ and ‘You Never Can Tell’ – for Daddy Cool’s aborted third studio album, adds some previously unreleased studio material, rare B sides for singles (e.g. ‘Don’t Ever Leave Me’, the flipside of ‘Hi Honey Ho’) and rounds out the package with a selection of live recordings. 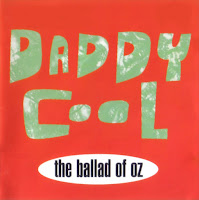 In 1994, Daddy Cool – Ross Wilson, Ross Hannaford, Wayne Duncan and Gary Young – reform for a tour with Skyhooks.  Like Daddy Cool, by this time Skyhooks has been inactive for many years and – again like Daddy Cool – their most celebrated line-up comes together again for this tour.  The two acts unite for a CD single containing four songs, two songs by Daddy Cool and two songs by Skyhooks.  Daddy Cool is represented by ‘Ballad Of Oz’ (AUS no. 36) and ‘$64,000 Question’ while Skyhooks offer ‘Happy Hippy Hut’ and revisit their 1974 song ‘You Just Like Me Cos I’m Good In Bed’.  This is the final Daddy Cool single to show up on the Australian popular singles chart.  The ‘reformation collapses when the single does not chart well and the tour is downgraded to the pub circuit.’  Daddy Cool disbands again. [extracts from rockportraits.wordpress.com]
.
This post consists of FLACs ripped from my CD release. Even though I have this on vinyl and it's in great condition, the CD sounds much better so this is what is on offer here. As a bonus, I am also including two tracks taken from their 1994 single "The Ballad Of Oz" (see cover above). Of course, full album artwork is included for both media types along with label scans and select photos of the band. This compilation is one of their best and contains ALL of their most popular tracks.  Very Cool indeed !
.
Track Listing 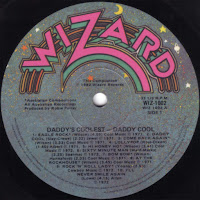 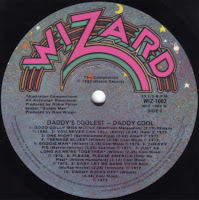