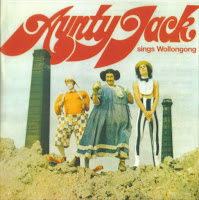 The Cool Bananas was a pseudonym for Grahame Bond and Rory O'Donoghue, who were the stars of the ABC's Aunty Jack show. The programme was a highly successful, bawdy television comedy which, despite its popularity, was dropped after only two series.
'Farewell Aunty Jack' was released on a special record which had a pictorial representation embedded into the vinyl. The single was enormously successful, and by June 1974 it had reportedly sold over 100,000 copies. (see previous post)

As a result of its popularity, a group called Gong was formed to tour as Aunty Jack and the Gong. The band included Tony Buchanan, Mark Punch, Ian Clyne, Russell Dunlop, Tim Partridge and Denny Gordon. 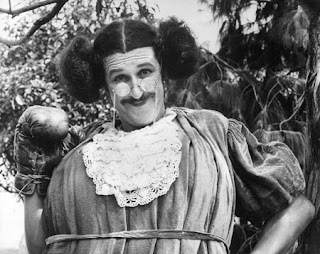 Before the fad began to wither, an album entitled 'Aunty Jack Sings Wollongong' was released on Polydor in April 1975, although the album cover and associated record label specify 1974..
Rory continued performing and composing and formed a successful music writing company with Grahame [extract from Noel McGrath's 'Australian Encyclopedia of Rock', Outback Press 1978, p74-75]

“The Aunty Jack Show” was one of Australia’s earliest and best loved TV Logie Award winning comedy series. Starring a motor-cycling transvestite boxer, it ran from 1972 to 1973 on Australia’s national broadcaster ABC-TV and attained an instant cult status that persists to this present day. The main character “Aunty Jack” was a unique comic creation, an obese, moustachioed, gravel-voiced transvestite, part trucker and part pantomime dame who habitually solved any problem by knocking people unconscious or threatening to ‘rip their bloody arms off’. Visually, she was unmistakable, dressed in a huge, tent-like blue velvet dress, football socks, workboots, and a golden boxing glove on her right hand. She rode everywhere on a Harley Davidson Motorcycle and referred to everyone as “Me Little Lovelies”. 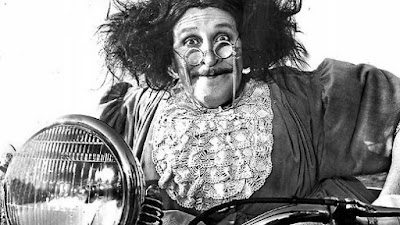 Under threat of having their “bloody arms ripped off” if they didn’t, Australians of the early seventies had little option but to tune in each week to their favourite Aunt. [extract from tagg.com.au]

The album 'Aunty Jack Sings Wollongong' was  conceived as an aural/visual experience; a T.V show on record; sound with pictures. From a day trip to Wollongong to Spider Farrelly's Buck Party. Settle back, close your eyes and be transported to a day in the life of Aunty Jack with Thin Arthur and Kid Eager. 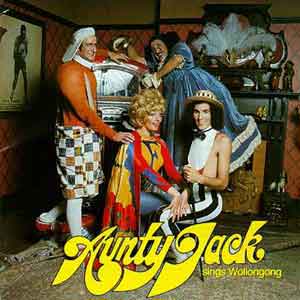 Share the dingy atmosphere of the Gong a Go Go with MC Norman Gunston. Hear the Farrelly Brothers perform their greatest hit. Attend an audition with Mervyn Whipple,Man of 1000 faces. Come into the other World of Neil and Errol, then take a trip to the abattoirs with Kev Kavanaghand the Kavemen and join in the Wollongong National Anthem with Norman. Come to Spider Farrelly's Buck's party where the Ri Fol Tit Men make a special appearance.
Aunty Jack takes her clothes off and the Farrelly Brothers take dangerous substances. A stirring rock opera Tarzan Super Ape followed by a fish milkshake. More country and western suburbs music then the Ode followed by Aunty Jack and the Box.
"Farewell Aunty Jack" leads to a jam session with a famous Japanese blues star and his Indian sidekick. The rest is history  [extract from CD liner notes]
. 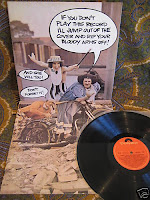 This post consists of FLACs ripped from a double CD release entitled 'Aunty Jack - Auntyology (1972-1985)' which features this album. I own a vinyl copy of this album (in fact I have 2 copies), but I decided that a CD rip would provide better quality recordings. Full album artwork for both vinyl and CD are included, and features a 20 page booklet of lyrics to all songs and dialogue.
Now, in the infamous words of Aunty Jack, if you don't leave a comment after downloading this post, I'm gonna come out of your computer screen and Rip Ya' Bloody Mouse Off ! LOL
.
Tracklist
01 Rip Off
02 I've Been Everywhere * 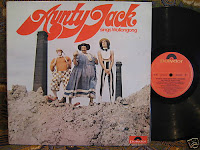 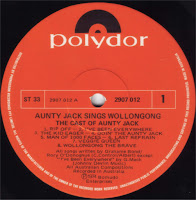