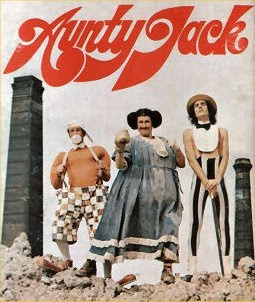 This WOCK posting comes under the 'crazy' category. As a young teenager, I have fond memories of tuning in to the ABC on a Sunday night to watch one of my favourite shows 'The Aunty Jack Show'.
The Aunty Jack Show was one of Australia's earliest and best loved TV comedy series in the 70's. Australian comedy changed forever the night that Aunty Jack (a motor-cycling transvestite boxer) roared into Australian living rooms on his/her Harley-Davidson. The Logie-winning series ran from 1972 to 1973 on ABC-TV and attained an instant cult status that persists to this day. Under threat of having their "bloody arms ripped off" if they didn't, Australians of the early seventies had little option but to tune in each week to their favourite Aunt, or pay the consequences! 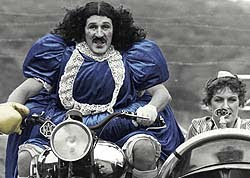 Aunty Jack was a unique comic creation, an obese, moustachioed, gravel-voiced tranvestite, part truckie, part pantomime-dame, who habitually solved any problem by knocking someone out or ripping their arms off. Visually, she was unmistakeable: she wore a huge, tent-like blue velvet dress, football boots, and a golden boxing glove on one hand. She rode everywhere on a Harley-Davidson and referred to everyone as "me little lovelies" -- unless of course she was uttering her familiar threat: "I'll rip yer bloody arms orf!", a phrase which immediately passed into the vernacular. 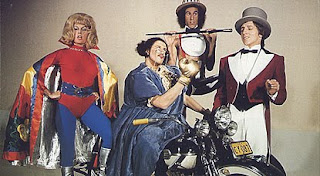 The character of Aunty Jack was devised and played by the multi-talented Grahame Bond and was partly inspired by an overbearing uncle of Grahame's whom he had disliked as a child.
Aunty Jack alternated one-off sketches with segments featuring a regular and semi-regular characters. As well as Aunty Jack and her sidekicks -- blonde bombshell Flange Desire, the tremulous Thin Arthur and snobby Narrator Neville, there were semi-regular appearances by nervy folk-singing duo Errol and Neil (Grahame & Rory) and extrovert rock'n'roll butcher Kev Kavanagh (Grahame), the obnoxious Kid Eager (McDonald), a parodic amalgam of characters like Dennis the Menace and Ginger Meggs, and towards the end of the second series, Wollongong TV presenter and super-dag Norman Gunston (McDonald) for whom some bright spark at the ABC recognised the potential in this character, and he was offered a tonight show of his own on ABC television in the mid-70s. Somewhere along the line, he was christened with the sobriquet ‘The Little Aussie Bleeder’, and the rest of course is history. 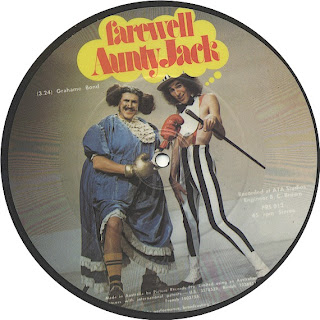 The theme song ‘Farewell Aunty Jack’ was written by Graham Bond & Rory O'Donoghue, reaching number one on the Australian charts in 1974. I was lucky enough to acquire a Picture Disc copy of the single from my local newsagency/record outlet, and it was acquired for the pricely sum of $1.25. The attraction of the song lies with the bizarre lyrics which threatens the listener with having their arms ripped off through the radio. Part comedy song, part signature sign off for the closest Australia has ever come to producing something as good as Monty Python's Flying Circus, "Farewell Aunty Jack" has all the hallmarks of a Phil Spector or Roy Orbison mini-rock-opera. There are quiet bits, loud bits, moments where love and hope, sadness and solitude are counterbalanced with motorcycles and a fat transvestite with a golden glove.
. 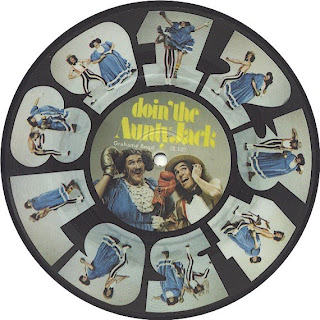 This was the biggest selling song in Australia in 1974 (8 weeks at number one and 22 weeks in the charts) and it's very easy for me to put on those gruff tones of Aunty jack and recite "I'm really off this time...like a piece of cheese".
The B Side is pretty good also and rocks on nicely with the catchy phrase "Doin' The Aunty Jack".
I am including both A and B sides of the single (ripped at 256kps), a sample sound clip of Aunty Jack's threat to Rip Ya Bloody Arms Off ! and several video clips taken from the show. Full artwork and selected pictures are also included.

Finally, in the infamous words of Aunty Jack, if you don't leave a comment after downloading this WOCK selection, I'm gonna come out of your computer screen and Rip Ya' Bloody Mouse Off ! LOL
.
Aunty Jack Link (30Mb) REPOST
.
Posted by AussieRock at 10:17 PM