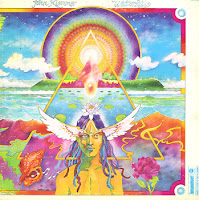 Really feelin' the echoplex on the sax, as well as the electric piano, which helps to make for a generally loose, mellow vibe.

This really is a wonderful classic from John Klemmer – one of those artists we've under-appreciated for years, but grow to love more and more as time goes by! The set's an incredibly soulful set of explorations played by Klemmer (on tenor, soprano, and Echoplex) with a group that includes Mike Nock on Fender Rhodes, Eddie Marshall on drums, Victor Feldman on percussion, and Wilton Felder on bass – definitely in the post-Coltrane mode, with long spiraling solos that explore both space and the outer sonic reaches, yet never too way-out, and never losing a subtle swing that makes the record sparkle with unimaginable appeal. One of those few hippy jazz classics that really works – and which arguably sounds better now than it did back in the 70s! Titles include "Centrifugal Force", "There's Some Light Ahead", "Waterfall", and "Utopia: Man's Dream". 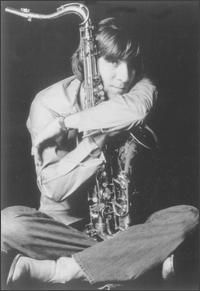 Waterfalls, released in 1972, was John Klemmer's 6th album. While living in L.A. in the late 60's and early 70's at the height of the rock explosion, he did concerts with Janis Joplin etc. and local L.A. rock groups and musicians. He incorporated these new styles etc. in his recordings for Cadet Concept/Chess & Impulse! records, constantly breaking new ground, broadening & increasing his critical interest & acclaim & fan base.

Review
Waterfalls is a psychedelic Jazz recording of eight tracks with a cavalcade of shared Exotica particularities, envisioned by tenor saxophonist John Klemmer and his sextet, performed live at the Ash Grove Club in Los Angeles in June 1972 and, as the liner notes astutely claim, enchanted at The Village Recorder in the same city and month. The album offers a superb fusion of Exotica, Funk, Batucada and Ambient, but seriously, the Funk part of this list is probably the least
stringent force that wafts around this aquatic LP. The front artwork suggests a wonderful magic world full of vivacious trees and valleys, but this is simply not applicable in the given arrangements which burst at the seams when it comes to glittering moonbeams, nocturnal cascades and nightly rivers. This feeling is fueled in large parts by the use of an electric Rhodes piano and plinking cymbals in tandem with the saxophone. 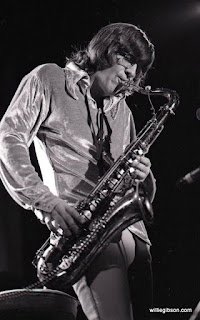 While there is not even one birdcall in sight, let alone the probably expected inclusion of water drops or liquid field recordings, Waterfalls paints a galactic yet humane and inhabitable void of drenched landscapes. Even though it is recorded in front of a live audience, the sound quality is unbelievably crisp, with the few cheers and hand claps of the audience hailing from a curious distance, as if they cross-faded from a parallel universe into the intrinsic world which John Klemmer and his band create. The sextet comprises the talents of Mike Nock on said electric piano, Eddie Marshall on the drums, Victor Feldman on various sparsely used and not overly exotic percussion devices, bassist Wilton Felder, vocalist Diana Lee who appears in two tracks, and last but not least John Klemmer on the tenor or soprano saxophone. Luring, cleaning and seductive: here’s a closer look at John Klemmer’s Waterfalls.

"Prelude I" functions as the introduction to the cascading movements of Waterfalls. Sure, its title states exactly that, for it is the reason of any prelude to make the listener comfortable with the things to come, without letting him- or herself immerse all too densely in the unfolding structures. It is therefore no surprise that this is a proper solo; only John Klemmer is heard on the tenor saxophone whose heavily convoluted and labyrinthine spirals are given enough time to let the listener fathom out the backdrop of nullity and blackness. There is a strong wideness in this piece, but it is not erected via blurred reverberations rather than soaked echoes created via Echoplex electronics. The result feels emaciated yet rich, and it is this bewildering gallimaufry which the listener must swallow in order to reach the dreamier parts of John Klemmer’s Utopian gardens.

And eureka, "Waterfall I" is ameliorated by Wilton Felder’s thick bass riverbeds and the excited cheers of the audience which otherwise remains whisper-quiet and is blinded out completely during the performance. The feeling is laid-back and nocturnal, not yet as bright as the delicate artwork suggests. Victor Feldman only very cautiously ennobles the tenor saxophone-heavy coils with a cymbal and softened hi-hats once in a while, whereas Mike Nock’s Rhodes piano delivers glistening scintilla which superbly augment the moonlit spirit of purity. Notwithstanding the esoteric psychedelia, this is indeed a postmodern Exotica piece, one that grows larger during its climactic end which does not lead to a definite eruption rather than a stream of carefully maintained bliss… followed by the introduction of Mr. Nock on the piano. These instances might throw the listener out of the dreamworld, true, but Waterfalls I is simply too luring and enchanting to get hurt by these fragments of the real world. 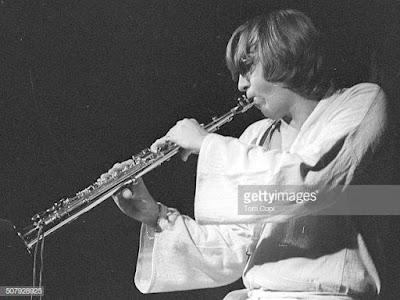 Up next is the innermost core called "Utopia: Man’s Dream" which is divided into Part 1 and Part 2, having a total runtime of almost 13 minutes. The CD reissue merges both parts together, as it should be. Completely enthralling times are ahead of the listening subject: a cosmic mélange of languorous wind chimes, galactic Rhodes piano shards and yearning saxophone tones in tandem with Diana Lee’s vocal-related mimicry await the traveler. After approximately two minutes, the composition is revised by Eddie Marshall’s skillful drum protrusions. In the meantime, it turns out that Klemmer’s sax and Lee’s vocals are really glued to each other; there are several purely instrumental segues and interludes, but the temptress joins the silkened brazen effulgence time and again. The saxophone is clearly in the forefront, as is common in Klemmer’s album, and this fact does not diminish Mike Nock’s polyhedron piano crystals but only makes the backdrop a more interesting and luring underbrush to venture into. The aura is occasionally calcined by cheers and claps of the attendees, but only infrequently.

The moments of soothing quiescence are probably the most surprising revelation of "Utopia: Man’s Dream". And indeed, once the saxophone is mute and lets bassist Felder, pianist Nock and percussionist Feldman interact with each other at the end of Part 1, the ensuing interdependency takes both the song and its arrangement to new heights. Instead of high billows of rapture, a more reduced, carefully kindled luminousness is reached which partially reaches the colors of the front artwork, but otherwise nurtures the positively ashen moonlit tropicana. Part 2 is not much different and relies on the same four-note alterations of the main theme.

Speaking of the susurrant darkness: "There’s Some Light Ahead" addresses the missing cavalcades of colors by injecting them into the uplifting arrangement. Eddie Marshall’s drums are ubiquitous, the five-note main theme on the saxophone is gorgeously accompanied and then exchanged with glistening sparks of electric piano prowess and the accordant backing chords which mesh very well with the heavier drums and shakers, especially so since Klemmer’s tenor saxophone is replaced by a soprano one; this newly introduced device is at the same time played in a more soothing, not all too protuberant fashion. The result is a classic Funk escapade of the sumptuously poeticized kind, strongly mellow and pristine. 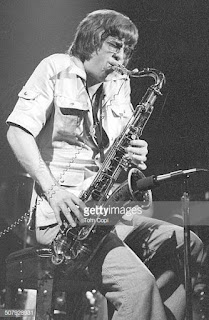 However, nothing prepares the listener for the following Centrifugal Force, a fast-paced, eclectic yet accessible maelstrom of Diana Lee’s chants, Mike Nock’s heftily crystallized electric piano prongs, Eddie Marshall’s cymbalscapes, Wilton Felder’s bouncing bass runlets and… the omission of John Klemmer for exactly three minutes. Despite the joyously upbeat wind chime-underpinned aqua adventure, this trip never feels forceful nor staggering. There are many Ambient segues hidden in the alcoves of the titular centrifugal force, and even though the listener as well as the band are absorbed and soaked into its very center, the tune always feels like a reverie and an breakneck voyage. The simultaneity of these feelings only makes it stronger. The album ends the way it began by offering reinterpreted versions of the first two tracks: "Prelude II" is strongly tied to the first prelude and features anyone but John Klemmer on a reverb-affected tenor saxophone.

"Waterfall II", however, differs in that it weaves the theme of Waterfall I into a more groovy, city-like beat structure without neglecting the phantasmagorical luminescence of the album. This very beat is not dropped before the Ambient half of the tune is over, and even then the ambience takes over time and again, rounding the album off with the endemic Rhodes piano glitters and mellifluous saxophone tones.

John Klemmer’s Waterfalls is a strong concept album with an admittedly bewildering last third – a second prelude? Really? – and an ever-sparkling physiognomy whose complexion is potentially gelid and frosty, but strikingly heated by the interplay between the sextet. John Klemmer is naturally heard most of the time, but he allows his fellow band members to bathe as well in the limelight by delivering highly melodious segues whose textural range is awesomely tempting. This is obviously no clear-cut Exotica album, but if the genre had not faded away during the middle of the 60’s, chances are that John Klemmer’s album would have provided one possible missing connection to the graceful, exhilarative and nocturnal moirés of the late 50’s indeed. I deem Mike Nock’s Rhodes piano as essential as the tenor saxophone, especially so since its purified omnipresence is, as the word already explicates, all over the album and rarely ever silent except in the two preludes. 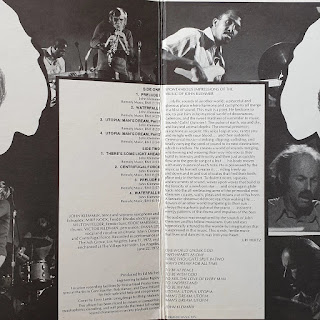 This is a Jazz album alright, one with quickly vesiculating build-ups, ebullient shapes and structures, but there is never a dull moment or a designedly off-putting eclecticism that prevents birdcall-swarmed Exotica listeners from enjoying the coziness-augmenting textures. Sure, there are vintage listeners who do not want their beloved genre to be pestered with electronic devices. In this regard, they may well skip Waterfalls, but contemporary listeners in search of fast-paced, varied takes should pre-listen to Centrifugal Force and see whether it suits their fancy, whereas followers of the Ambient Exotica movement will be pleased with all other tracks.  [Exotica Review 255: John Klemmer – Waterfalls (1972). Originally published on Aug. 31, 2013 at AmbientExotica.com.]
.
This post consists of FLACs and MP3's (320kps) ripped from vinyl (another flee market gem) and includes full album artwork and label scans.  A nice jazz fusion recording, with occasional interactions from the live audience - not to be missed. Just love the album cover, very Psychedelic.
Note: because tracks 3 & 4 run into one another, I have recorded them as one track, so as not to interrupt the listening experience. 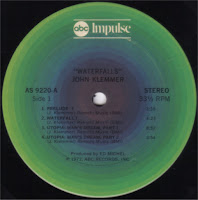 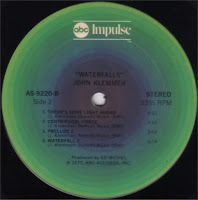 Posted by AussieRock at 7:27 AM