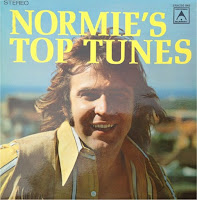 Normie Rowe was born on February 1, 1947 in Melbourne. He attended Merri Primary School and began singing with the local church choir. During his latter years at primary school, although still a pre-teen, Normie became caught up in the emergence of rock'n'roll in the mid-fifties.
His interest in the 'new' music prompted him to take up the guitar and during his early years at Northcote High School he met up with some other young musicians and formed a band. The group was very much an amateur outfit and they performed once a month at the Alphington Methodist Church. 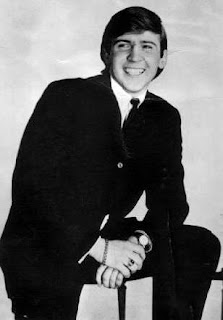 From there his interest turned more to singing and his first appearance on stage was at the age of fourteen when he appeared at a concert with a music school. The compere happened to be Melbourne radio personality, Stan Rofe, who was impressed enough to arrange for him to work with dance promoter, Kevin McClellan. Normie's early appearances were with the Thunderbirds and later he began working with the Playboys.

In the interim, he started work with the PMG as a trainee technician. As the fashions changed (with the advent of the Mersey-sound) Normie got involved in a dispute with his employers over the length of his hair. At this point he had an important decision to make regarding his career. Normie chose to keep his hair long, leave the PMG and become a professional entertainer.

It was a decision that he never lived to regret. By early 1965 he had become a regular on Melbourne television and had scored a contract with Sunshine Records. Normie's first single was an updated version of 'It Ain't Necessarily So' from the musical, Porgy and Bess, The inspiration for his treatment of the song had come from a version they had found on an album by an English group, the Mersey-beats. The record was not only his first release, but his first chart-topper. 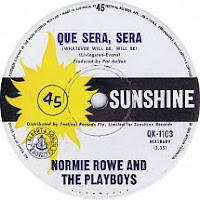 Normie's follow up single was a revival of the Ben E. King ballad, 'I (Who Have Nothing)'. Then came his amazing double-sided hit record of 'Que Sera, Sera'/'Shakin' All Over' which stayed in the charts for an incredible 28 weeks and was reported to have sold over 100,000 copies. In fact during October, 1965 Normie had all of his first three singles on the top forty at the same time.
His debut album 'It Ain't Necessarily So, But It Is' was released in July '65 and in November he scored yet another hit with 'Tell Him I'm Not Home'.

By now, Normie had become Australia's most popular male singer and his appearances virtually always resulted in scenes of hysteria from his over-zealous female fans. Throughout 1966 the hits kept on coming with 'Breaking Point' (February) and 'Pride and Joy' (June).  He became the first Australian Artist ever to receive a Gold Record whilst the record was still high in the charts and the first to have three records in the charts simultaneously.

Having reached the top in Australia, Normie set his sights on the British market and set off for England in September '66. In the UK he utilised the services of Ritchie Yorke as his agent and two months later he was joined by the Playboys (consisting of a revitalised line-up). He recorded four tracks there — 'Ooh La La', 'Mary Mary', 'Turn On The Love Light' and 'I Can't Do Without Your Love'. Normie's first English-produced single was 'Ooh La La' which made some impression on the charts there, whilst back home it shot up to the number one position.  In fact, it outsold singles by The Who, The Move and Jimi Hendrix in the week of its release (as reported in the accompanying English newspaper article).

Meanwhile, he had been voted Australia's top male singer in Go-Set's first national Pop Poll.
Normie flew back home for the Christmas period, coinciding with the release of his second UK single ('It's Not Easy'/'Mary Mary') and in January '67 he returned to England.
Back in Britain he toured with Gene Pitney and the Troggs, but the going was tough and he found it difficult to make a major breakthrough. From there Normie flew to America where he toured with Roy Orbison and in Canada he represented Australia at the World's Fair.

He returned home in July to find that he had lost a little of his ground and in September he received his army call-up notice, which meant that plans for further overseas trips had to be cancelled. Another set back occurred the following month when it was announced that the Playboys were disbanding. Normie did enjoy some chart success in 1967 though, with two singles making it — 'Going Home'/'I Don't Care' and 'But I Know'/'Sunshine Secret'. Another release, 'Turn Down Day', made the charts in Melbourne in September.

In February, 1968 Normie was inducted into the Army. Nevertheless, he continued to entertain part-time, sporting his new 'short-back-and-sides' hair-do. He also managed to produce a minor hir with a song called 'Penelope' and midway through the year he began working with a new group called Nature's Own .

Then in January, 1969 he was sent to Vietnam and his singing activities were virtually completely curtailed. Normie's restricted number of releases during this period included 'You Got Soul' in May '69. His release from the army was effected in February, 1970 and within three months he had re-entered the charts with 'Hello'(written by Johnny Young). The single was followed by an album of the same name.  And of course, various compilations were released by Sunshine to keep Normie's fan base happy during this hiatus period, and 'Top Tunes' was one of these.

In January,  1971  'Que Sera, Sera' was re-released to co-incide with the issue of a new version by Mary Hopkin. On March 6, '71 Normie married his long-time, but little publicised girlfriend, Sue Powlesland. Over the next couple of years he faded from the public eye to a certain extent as his work pattern began to centre around clubs and hotels right around Australia.

Mid 1973, Normie released a version of 'Rings' which sold moderately, but very few singles were issued over the next few years. However, in 1975 he came up with an interesting album entitled That's The Way I Am. Later that same year he won the Best Song category at the Tokyo Song Festival with a number he performed entitled 'Elizabeth'. It was later released as a single and made a small impression on the charts in some states. 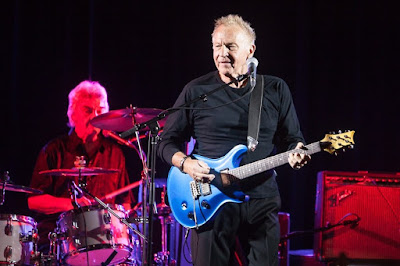 Since then he has continued to appear at clubs and on national TV variety shows. In June, 1976 he released a single, 'Mother's Boy' on the Rainbird label.   Normie spent 1978 firmly entrenched in the club/cabaret circuit, although he did also appear as compere on a Queensland T.V show 'Stairway to the Stars' and acted in an episode of the Channel 10 network's 'Chopper Squad' [extract from Noel McGrath's Australian Encyclopedia Of Rock. Outback Press, 1978. p265-268]
. 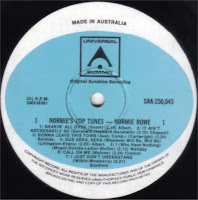 This post consists of FLACS  ripped from a Summit record release (low budget label) which has seen better days. Although the cover is well worn, the vinyl is still in pretty good nick. Very few pops and crackles on this one folks.  Now, the title of this album 'Top Tunes' is a little debatable.  Side one of this album is certainly chocked full of #1 hits, but the flip side contains tracks that were either released as B-Sides or only appeared on albums.  Not sure why some essential hits like "Ooh La La" and "It's Not Easy" were not included, but I have taken the liberty of including these as Bonus Tracks to fill the gaps.
.
Tracklist:
01 Shakin' All Over
02 It Ain't Necessarily So
03 Gonna Leave This Town 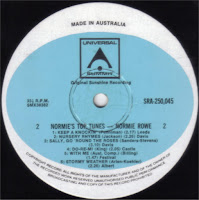