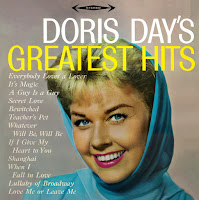 With the recent passing of Doris Day, I felt compelled to pay tribute to one of the most popular female Singer / Actresses of the 20th Century.  I admit that her genre of music isn't the usual type of music that I post on my blog, but I'm prepared to make an exception in this case, and if the post isn't well received, then in her own words: (Que Sera, Sera) Whatever Will Be, Will Be.
.
When Doris Day decided to set out on her own after being feature singer with such famous bands as Bob Crosby's, Fred Waring and Les Brown, she did not realize she was launching such an amazing musical career.
On her first engagement at the Little Club in New York, she was offered a screen test by Warner Brothers. Director Michael Curtis saw the test and three days later the unknown Doris was playing one of the leads in "It's Magic". From that point on, her movie career progressed in leaps and bounds, covering comedy, drama and musicals.

At the same time her singing career also kept pace with her amazing movie career. Each year Doris came up with hit after hit—such as "If I Give My Heart to You", "Lullaby of Broadway" and "Everybody Loves a Lover." In many, cases, her "hit songs" were the feature of her films—the Academy Award winning "Whatever Will Be, Will Be" (The Man Who Knew Too Much"), "Teacher's Pet" (the film of the same name) and "Secret Love" (Calamity Jane).
Even after, ten years, Doris Day is still as popular now as she ever was. Furthermore, she has a voice and personality that will keep her in the number one position for a long time to come [ Liner Notes]
. 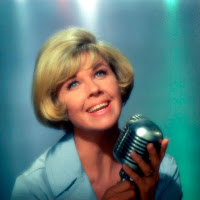 Obituary By Aljean Harmetz
(May 13, 2019 New York Times)
Doris Day (Born April 3, 1922), the freckle-faced movie actress whose irrepressible personality and golden voice made her America’s top box-office star in the early 1960s, died on Monday at her home in Carmel Valley, Calif.  She was 97. The Doris Day Animal Foundation announced her death.

Ms. Day began her career as a big-band vocalist, and she was successful almost from the start: One of her first records, “Sentimental Journey,” released in 1945, sold more than a million copies, and she went on to have numerous other hits. The bandleader Les Brown, with whom she sang for several years, once said, “As a singer Doris belongs in the company of Bing Crosby and Frank Sinatra.”

But it was the movies that made her a star.

Between “Romance on the High Seas” in 1948 and “With Six You Get Eggroll” in 1968, she starred in nearly 40 movies. On the screen she turned from the perky girl next door in the 1950s to the woman next door in a series of 1960s sex comedies that brought her four first-place rankings in the yearly popularity poll of theater owners, an accomplishment equaled by no other actress except Shirley Temple.

In the 1950s she starred, and most often sang, in comedies (“Teacher’s Pet,” “The Tunnel of Love”), musicals (“Calamity Jane,” “April in Paris,” “The Pajama Game”) and melodramas (“Young Man With a Horn,” the Alfred Hitchcock thriller “The Man Who Knew Too Much,” “Love Me or Leave Me”).

James Cagney, her co-star in “Love Me or Leave Me,” said Ms. Day had “the ability to project the simple, direct statement of a simple, direct idea without cluttering it.” He compared her performance to Laurette Taylor’s in “The Glass Menagerie” on Broadway in 1945, widely hailed as one of the greatest performances ever given by an American actor.

She went on to appear in “Pillow Talk” alongside Rock Hudson (1959), “Lover Come Back” (1961) and “That Touch of Mink” (1962), fast-paced comedies in which she fended off the advances of Rock Hudson (in the first two films) and Cary Grant (in the third). Those movies, often derided today as examples of the repressed sexuality of the ’50s, were considered daring at the time.

“I suppose she was so clean-cut, with perfect uncapped teeth, freckles and turned-up nose, that people just thought she fitted the concept of a virgin,” Mr. Hudson once said of Ms. Day. “But when we began ‘Pillow Talk’ we thought we’d ruin our careers because the script was pretty daring stuff.” The movie’s plot, he said, “involved nothing more than me trying to seduce Doris for eight reels.”

(Ms. Day and Mr. Hudson remained close. Not long before his death from AIDS in 1985, he appeared with her on her television show “Doris Day’s Best Friends” and at a news conference. “He was very sick,” Ms. Day said. “But I just brushed that off and I came out and put my arms around him and said, ‘Am I glad to see you.’ ”)

Following “Pillow Talk,” which won Ms. Day her sole Academy Award nomination, she was called on to defend her virtue for the rest of her career in similar but lesser movies, while Hollywood turned to more honest and graphic screen sex to keep up with the revolution sweeping the world after the introduction of the birth control pill.

Ms. Day turned down the part of Mrs. Robinson, the middle-aged temptress who seduces Dustin Hoffman, in the groundbreaking 1967 film “The Graduate,” because, she said, the notion of an older woman seducing a young man “offended my sense of values.” The part went to Anne Bancroft, who was nominated for an Academy Award.

By the time she retired in 1973, after starring for five years on the hit CBS comedy “The Doris Day Show,” Ms. Day had been dismissed as a goody-two-shoes, the leader of Hollywood’s chastity brigade, and, in the words of the film critic Pauline Kael, “the all-American middle-aged girl.” The critic Dwight Macdonald wrote of “the Doris Day Syndrome” and defined her as “wholesome as a bowl of cornflakes and at least as sexy.”

For the rest of her life she lived on a seven-acre estate with many more dogs than the zoning laws allowed. In the 1985-86 television season she was the host of “Doris Day’s Best Friends,” on the Christian Broadcasting Network, which focused on animal welfare.

Terry Melcher, her only child, who became a successful record producer, died in 2004. Her survivors include a grandson.

In 2011, three years after she received a lifetime achievement Grammy Award, Ms. Day surprised a lot of people by releasing her first album in almost 20 years, “My Heart,” which consisted mostly of songs she had recorded for “Doris Day’s Best Friends” but never released commercially.

Ms. Day, who summed up her fatalistic philosophy in the words of one of her biggest hits, “Que Sera, Sera” (“What will be, will be”), never liked unhappy endings. She told one interviewer: “It upsets me when the hero or heroine dies. I would like them to live happily ever after.”

But, except in movies, nobody lives happily ever after. Ms. Day told Mr. Hotchner: “During the painful and bleak periods I’ve suffered through these past years, my animal family has been a source of joy and strength to me. I have found that when you are deeply troubled, there are things you get from the silent, devoted companionship of your pets that you can get from no other source.”

“I have never found in a human being,” she added, “loyalty comparable to that of any pet.”
[extract from the New York Times]
. 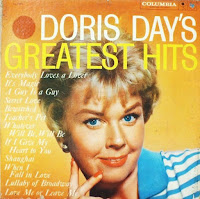 This post consists of MP3's (320kps) ripped from my newly acquired vinyl which is in relatively good condition. Coincidentally, I came across this album at my local flee market only weeks before her passing, and is not normally the genre of music that I pick up, but the cover image caught my eye and the $2 price tag made it to good to resist.  It was only when I got it onto my turntable at home that I realised there were a few annoying scratches on some tracks, but I have painstakingly removed all clicks and pops manually using Audacity's Click Removal Tool sparingly. As usual full album artwork is included, along with label scans and all photos included in this post. I have also added the European front cover (see right) which is different to the unique Australian cover which is in my opinion is far superior.

Note: There is some contention as to when Doris Day was born. All sources on the Internet say 1922, however Melinda Schnieder (who has performed a tribute show 'Melinda Does Doris' for many years now) was told by Doris in person that she was born on 1924. Whether this was old age talking or maybe just vanity, 1922 is still considered to be correct.

I do hope you take a risk and download this album, as it is a wonderful collection of her early material, including her biggest hit "Que Sera, Sera".   RIP Doris Day 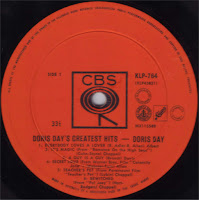