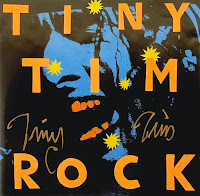 .Herbert Buckingham Khaury (April 12, 1932 - November 30, 1996), known professionally as 'Tiny Tim', was an American singer, most of the time ukulele player, and musical archivist. He is best remembered for his hit "Tiptoe Through the Tulips" sung in a high falsetto/vibrato voice.

Having heard Tiny Tim's cover of AC/DC's "Highway To Hell", I simply had to find the rest of Tiny Tim’s 'Rock' album, and consequently share it with you. I am forced to re-evaluate someone who I always dismissed as a token novelty freak that was just cashing in for all those times he got beaten up in school for being a freak by exploiting his freakishness. But no more. Tiny Tim is one of the great musical geniuses of our time.

The Album 'Rock' (released in 1993 by Regular Records, Australia) was produced by Martin Sharp, as was the cover, and includes a collection of rock and rock n' roll songs by Tiny Tim.

Tiny Tim - Rock (Regular/Festival Records)
By: Gary “Pig” Gold
I’ve often been criticised for being a bit too hard on those musicians who choose to toil in the, shall we say, heavy metal idiom. Well, with all due respects to Lord Lemmy of Motorhead, you know why I sometimes get down on metal? Coz I rarely, if ever, hear it done RIGHT anymore. Meaning a dark wardrobe and scary band logo can only cut it so far, now that a quarter century’s passed since the last decent Sabbath album did it all first. Meaning, basically, heavy metal’s been by and large just pissing lemonade into the wind for quite some time. 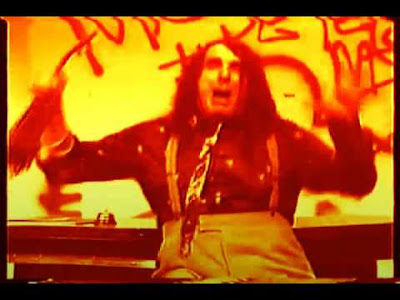 Imagine my shock, then, when a strange package from down-under arrived the other day, containing sounds so puerile and vicious that after one play through the first song I didn’t see my cat for three whole days (The true test of metal’s mettle, I’ll have you know). Each and every selection herein clocking in at well over the 15-minute mark (“Rebel Yell” hits a jaw-dropping 23:38 – could Mr.Idol ever keep it up for that long?) there are notes screeched throughout that Rob Plant may only dream of, and the entire cataclysm is topped off with a positively demonic reading of the classic “Eve Of Destruction”, appropriately enough.

You may very well have to write off to far off Australia – to AC/DC’s people, in fact – to secure your very own copy of this masterwork– that is until some domestic so-called h/c label scrapes up sufficient balls to issue it here. In the meantime, I defy any of you heavy pansies out there to show me one other act, or one other record, Tiny Tim Rock couldn’t eat for breakfast. [Extract from greylining.com]

Tiny Tim really rips it up here with AC/DC's classic "Highway To Hell" - so lock up ya daughters and get ready for some 'Kick Arse Rock'.
And so, for this very reason, Tiny Tim qualifies on all levels for this month's W.O.C.K On Vinyl post. It's Wild, it's Crazy, and above all, it really is  OK !
As a bonus, I've also included an earlier 'unplugged' rendition of "Highway To Hell" that Tiny Tim performed on MTV, this time on his beloved ukulele, both in MP3 and video formats (See screen shot below)
. 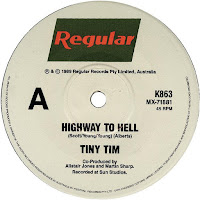 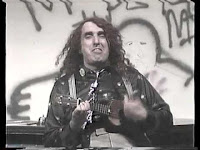