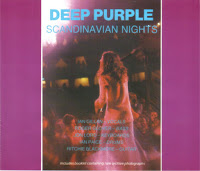 This classic Deep Purple concert was recorded by Sveriges Radio for a radio show called 'Tonkraft', held in Koncerthuset, Stockholm, on 12th.November 1970. This concert was originally released on vinyl in 1988 as 'Scandinavian Nights in Europe' and as 'Live and Rare' in the USA in 1992. The original master tapes were later discovered and are remixed for this release. The track order on this CD is different from the live set order.
Songs on the album are mainly from the 'Deep Purple In Rock' album - released early in 1970, and long instrumentals from earlier albums. The two songs "Mandrake Root" and "Wring that Neck" took up half the concert in the early days, until the Fireball tour.

This double-LP has some really good moments; I especially enjoy parts of "Mandrake Root", but the sound quality is disappointing, and the group's performance is uneven (and on occasion painfully out of tune).
The highlight of course is their #2 hit single at the time - "Black Night", with its catchy riff and enticing lyrics, which finished off their set list at the time. It is interesting to note that Black Night was not included on their In Rock album, mainly to attract fans who simply enjoyed their single but weren't interested in hearing more Deep Purple material. And the stalwart fans would of course buy both. Smart hey!
.
Review [Dave Thompson]
Deep purple's follow up album to 'In Rock' was an especial bugbear. Despite the promising start to the sessions back in September 1970, the band's schedule didn't allow them to return to the studio; they'd scarcely even got any writing done. The only significant addition to their live repertoire in recent months was an improvisational leviathan built around the Rolling Stones' "Paint It Black," which itself was little more than the framework for a marathon drum solo.
It was certainly exciting in concert, but it neither said nor did anything for Deep Purple's hopes of advancing their own art. Increasingly, it seemed that the band had reached a creative impasse, finding it easier to allow existing numbers to grow in length than concoct new material.

A live recording made for Swedish radio broadcast at the Konserthuset in Stockholm, on November 12,1970, captured the dilemma. The band's classical excursions notwithstanding, this remains one of the earliest MarkII concert recordings to have been officially released, in 1988, as the 'Scandinavian Nights' album; it was, in fact, one of the earliest of their concerts to even be recorded (only a February 1970 BBC broadcast and a dynamic Aachen festival show from July predate it).

Scandinavian Nights highlights a live set that comprised just seven numbers, including a mere three from In Rock (admittedly volcanic assaults on "Child in Time" and "Into the Fire," and an impossibly overwrought "Speed King"), three that were little more than endless jams ("Mandrake Root," "Paint It Black," and a full thirty minutes of "Wring That Neck"), and, finally, the encore hit "Black Night."
It is an exhausting listen and, in purely musical terms, an exhilarating one — the Bagshot Bullet, as the rest of Deep Purple nicknamed Blackmore's most frenetic playing, ricocheted wildly that night. But it is also the sound of a group that was swiftly vanishing up its own backside.[extract from Smoke On The Water: The Deep Purple Story. By Dave Thompson. ECW Press - 2004, p112]
.
Review 2
Good lord, this is pure hard rock heaven. This is the Deep Purple I fell in love with. The absolute best live rock band ever. Ritchie Blackmore and Jon Lord could jam and jam and jam and jam and......  Ian Paice may have been the heaviest rock drummer ever with the exception of Keith Moon. Catch a buzz, play this loud because this is what rock once was.
Seven tunes over 109 minutes, what hard rock band besides Deep Purple could do those kind of workouts and not bore you to death? There are not enough superlatives in the English language to describe this monster "live" album.

Although most famous Made In Japan was released in 1972, the group performed at venues around the world and presented how they can make amazing show. The time between albums, "In Rock," and "Machine Head" was definitely the best in band's history and from this period of 1970's comes this album. Registered in Stockholm shows practically crazy and unbelievable energy of Deep Purple, along with the feats of individual musicians as solo and joint improvisations which reached its apogee in the nearly half-hour "Mandrake Root."

Review 3
Scandinavian Nights is a double live album by the British hard rock band Deep Purple. It was originally recorded by Swedish National Radio for a radio show called Tonkraft at the Stockholm Konserthuset on 12 November 1970, but not released until 1988. The tapes were re-mixed by Tom Leader at Angel Studios in London.
The US double CD, released in 1992, was titled 'Live and Rare' (see cover below), while the European double vinyl and double CD, released in 1988, were both titled 'Scandinavian Night's. The European vinyl release contained a limited edition picture booklet.

The original master tapes were later discovered and remixed for a re-release as Live in Stockholm by Purple Records in 2005 (see cover below), with improved sound quality. On the original release the song running order was adjusted to fit the timing-restrictions of vinyl,and the CD edition unnecessarily mimicked this; Live in Stockholm features the set list in the correct order.
A new edition of the album, titled Stockholm 1970, was released in 2014 by EDEL as part of "The Official Deep Purple (Overseas) Live Series" with additional material: two songs recorded in Paris in 1970; contemporary Jon Lord interview; a bonus DVD with Deep Purple's performance at Granada TV in 1970, previously released on VHS as Doing Their Thing.
.
This post consists of FLACs and MP3's (320kps) ripped from my CD copy and includes artwork both Vinyl and CD releases.  Deep Purple MKII is my favourite iteration of this legendary band, who I have followed my whole life, starting as a teenager. I still remember the first day I heard "Black Night" played on the radio, and immediately thought the song was about a medieval Knight, and my misunderstanding only became apparent once I had purchased the single from my local record shop. And of course, when I bought their LP 'In Rock',  I was totally hooked.
. 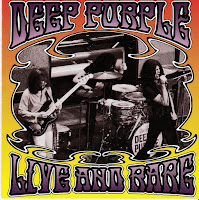 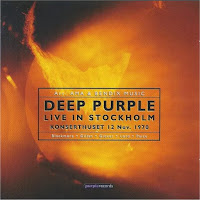