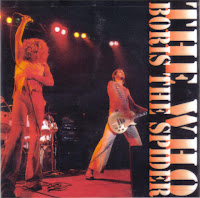 This is a great Japanese bootleg from the Who By Numbers tour in 1975, and was the last gig played in Germany before their U.S tour started. It is a factory pressed CD and is an audience recording. I would rate it as a 8/10. It comes as a nice glossy laminated LP replica style sleeve, 2 great discs this is the entire show...minus the encore "Magic Bus".
.
WHO BY NUMBERS
One month before this recording was made, 'The Who By Numbers' album was released on October 18th in the UK, where it peaked at No.7 in the charts. The album then entered the US albums chart on November 1st, where it peaked at No.8
By this time, a non-concept album by The Who was a concept in itself and on this album the ten new songs were linked thematically by Pete Townshend's growing concern with age and disillusionment. Several tracks: notably 'However Much I Booze,''In A Hand Or A Face' and 'How Many Friends'
were explicitly connected with Pete's anxiety in this direction, and John Entwistle's sole contribution 'Success Story' ran along similar lines.
Elsewhere, 'Slip Kid' was a neat, latter-day teen anthem, 'Squeeze Box' was a Jaunty, semi-humorous song (with Pete on accordion) chosen asa single and 'Blue, Red And Grey,' virtually a solo track by Pete, movingly recounts disenchantment with the rock'n'roll lifestyle so enjoyed by Keith Moon and many of his peers. 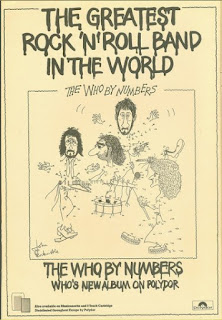 Clad in a sleeve designed by John Entwistle , the front cover incorporated a join-up-the-dots picture of The Who.

In the book Eyewitness: The Who by Johnny Black,  Entwistle states:
The cover drawing only took me hour, but the dots took about three hours. I took it down to the studio while we were mixing and got the worst artist in the room to fill it in. Discovered I'd left two inside legs out.
We were talking it in turns to do the covers. It was Pete's turn before me and he did the Quadrophenia cover, which cost about the same as a small house back then, about $16,000. My cover cost $32.

The record was also noticeable for a complete lack of the synthesizer parts that had been such a notable feature of the group's two previous albums. Instead, Nicky Hopkins added a generous amount of gentle piano. Instrumentally The Who showed no signs of flagging: Roger's vocals - particularly on "Dreaming From The Waist'and 'Imagine A Man'- were both melodic and inspiring, while Keith's usual bombastic drumming belied the physical deterioration brought about by his alcoholic tendencies. 'Dreaming From The Waist' included some popping bass lines that are among the finest John Entwistle has ever recorded and which would be further spotlighted in The Who's upcoming live performances.

While the standard of composition reached just short of that attained on Who's Next, The Who By Numbers opened the doors to an overt autobiographical style that served to emphasise Pete Townsend's honest approach to his work. By expressing his anxieties through the music of The. Who, he acknowledged the fact that the group are - and always will be-a band of the people whose problems could be shared with those people. According to the old adage, a problem shared is a problem halved and thus the tour that followed the release of The Who By Numbers saw the group return to the kind of form they displayed in pre-Quadrophenia days.

The Who By Numbers was the first Who album (aside from Roger Daltrey's Ride A Rock Horse) to appear on the Polydor label, and was thus the first public indication of the severance of The Who's long-standing relationship with managers Kit Lambert and Chris Stamp and their jointly owned Track Records. The litigation between The Who and their former managers was settled out of court shortly after the release of this album and the two former film directors who had played such a crucial role in The Who's career went their own way from this point onwards.

They had, by this time, fallen out with each other   . over financial matters and when Lambert issued a badly phrased press release that to some extent brought the squabbling out into the open, the split became irreversible. For the remainder of the decade Stamp involved himself in film work and quietly enjoyed his fortune, while Lambert spiralled downhill, squandering his fortune on drink and drugs.

"Kit bought a palace in Venice on the Grand Canal and tried to cultivate high society friends there," says Chris Welch who has written a biography of Lambert. "He was forced to leave Venice. He set fire to the palace and he ended up owing money all over town. He was an alcoholic and he was hooked on heroin and was forced to undergo treatment for this in a Swiss clinic. Back in London he was busted for cocaine after being shopped to the police by a pusher that he owed money to. He always felt very bitter that he didn't receive the credit he deserved for his work with Pete Towns/tend on Tommy."

Various people, including Pete Townshend, offered Kit Lambert a helping hand as his condition worsened but to no avail. Lambert died aged forty-five in April, 1981, after falling down the stairs at his mother's house in Fulham. That night, by all accounts, he had been involved in a drunken brawl at a night club in Kensington and had returned home injured from the beating he received. It was a sad and ignominious end fora man whose creative guidance and explosive vision had done so much to promote the career of the group he loved. 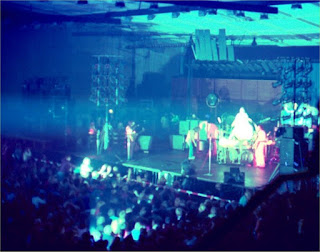 BRITISH TOUR
In September, 1975, The Who regrouped to rehearse for a lengthy series of tours that would take in Britain, Europe and, in three separate' visits, the United States. Fresh from his trip to America on soothing Meher Baba business, a refreshed and spiritually rejuvenated Pete Townshend walked into the first rehearsal smiling, a fact noted by Keith Moon as both unusual yet indicative of happier times to come.

The British leg of the tour opened with two concerts before large audiences at the New Bingley Halls near Stoke-on-Trenton 4-and 5 October, and from the programme selected it was apparent that Pete Townshend had exorcised his fears about the danger of The Who becoming a revivalist act. Though only two new songs from The Who By Numbers - 'Squeeze Box' and 'Dreaming From The Waist' - appeared in the set, The Who displayed an almost boyish enthusiasm for their older material, especially on the second night. 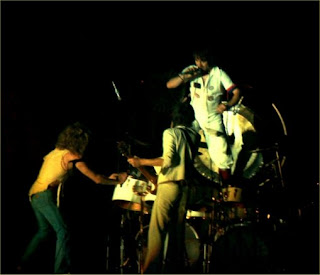 Opening with 'I Can't Explain' (now in its eleventh year!), they crashed through 'Substitute,' 'Magic Bus'and 'My Generation' from pre-Tommy days with wild abandon. Tommy itself was well represented with a half-hour medley, and Who's Next was represented by four songs, 'Baba O'Riley,' 'Behind Blue Eyes,' 'My Wife'and 'Won't Get Fooled Again,'the latter now a show stopper that featured Pete Townshend's longest Jump ever. Inevitably, perhaps, The Who had come to the collective conclusion to celebrate, rather than fear, their considerable catalogue of influential material. The result not only satisfied the fans but, happily, the group themselves.

Lighting engineer John Wolff had occupied his time | industriously during the group's lengthy sabbatical and had become adept in the operation of lasers, an effect that growing numbers of top rock acts were utilising in this period. Though The Who had always eschewed such gimmicks as dry ice and mirror balls, they threw themselves wholeheartedly behind Wolff's plans and from this tour onwards The Who's concerts featured a galaxy of lasers. Thin strands of spiralling light now emanated from behind Keith Moon's drum kit, flickering over Roger Daltrey's head up into the vastness of the auditoria. Such was Wolff's skill in handling these lasers that within a year he would become a recognised authority on the subject and hold his own exhibition of lasers and holograms in London. 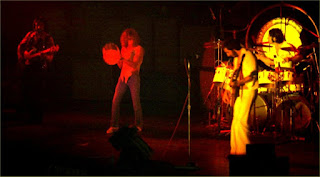 The tour moved to Manchester for two nights at the Belle Vue arena where the newly discovered camaraderie within the band resulted in shows that the now notorious Roy Carr described in NME as "... so intense as to sap every ounce of energy from the spectator, but it's an energy that's generated by a positive sense of purpose and not hate or anger."
Speaking to Carr after the concert, Roger Daltrey expressed his gratitude to the NME for bringing The Who's internal problems out into the open. "Now there aren't any fences for any of us to hide behind and that's the reason why I feel The Who are much better than they've ever been, simply because there is no excuse that any of us can make. If someone throws a tantrum on stage now, it's their bleedin' fault. Nobody's gonna hide behind The Who. 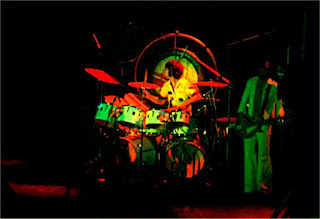 "The Who have always put their balls on the line," he added. "If they didn't then that kind of controversial publicity would have broken up any other group. Things like that interview are always bleedin' hard to do, but The Who can do it; and as everyone can see, use it to our mutual advantage. Pete's now fired with renewed energy. He realises that, despite what he said, The Who are the band that they used to be. It's Just that it got hidden under all that morass of over kill publicity."
After a concert at the Glasgow Apollo on 15 October, Keith Moon proved in his inimitable way that The Who were as anarchic as ever by falling foul of British Airways at Prestwick Airport. After an exchange of opinions with both police and airline staff over a broken computer, Keith was fined £6O for disturbing the peace. He later admitted that his net prof it at the end of the British tour was amere £46.7O.

The British tour climaxed with four concerts at the Wembley Arena in London and was followed by dates in Germany and Holland. [extract from The Illustrated Biography The Who, by Chris Charlesworth, Omnibus Press, 1982, Section 1975] 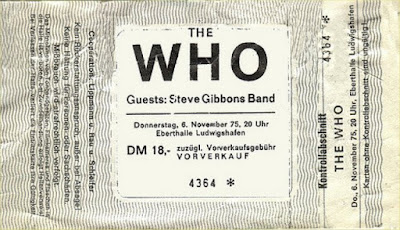 EUROPEAN TOUR
This leg began on 27th October at the Ahoy in Rotterdam in the Netherlands and ended on 7th November at the Friedrich-Ebert-Halle in Ludwigshafen in Germany, from where this recording originated. By this time, the band was already starting to pare down the set list. Here is a fairly typical set for this leg of the tour (actually from a concert in Düsseldorf, Germany, on 31 October). 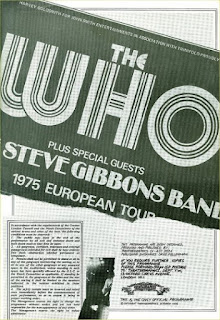 "Substitute"
"I Can't Explain"
"Squeeze Box"
"Boris the Spider" (John Entwistle)
"Baba O'Riley"
"Behind Blue Eyes" (not on 2nd November)
"Dreaming from the Waist"
"Amazing Journey"/"Sparks"
"The Acid Queen"
"Fiddle About" (Entwistle)
"Pinball Wizard"
"I'm Free"
"Tommy's Holiday Camp" (Keith Moon)
"We're Not Gonna Take It"/"See Me, Feel Me"
"Summertime Blues"
"Bargain" (Dropped after 31st October)
"My Generation"
"Won't Get Fooled Again"
Encores (variations of the following list):
"5.15"
Performed on 3rd November.
"Magic Bus"
Performed on 7th November.
.
This post consists of MP3's ripped from my Killing Floor bootleg and includes album artwork and concert photos (thanks to Klaus Hiltscher).  I've also include artwork for an alternative release of the same concert by NSU (see below).  This boot is a must for all Who fans, and shouldn't be missed.
As a side note, if you've got the Who By Numbers album and weren't tempted to join the dots like most Who fans, the virgin cover is worth big bucks.  I picked up my copy for $1.99 back in the 70's from Brash Sutton in Geelong from the sale box, and thankfully left it alone!
.
Tracklist 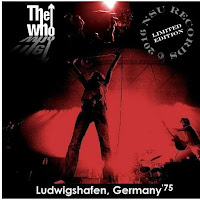 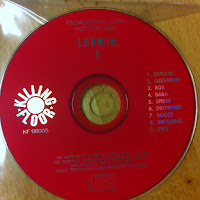 Posted by AussieRock at 8:37 PM