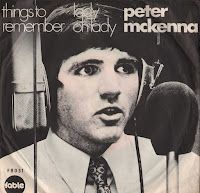 In recognition of the 2018 AFL Grand Final,  played today between Collingwood and the premiers West Coast, I thought it relevant to post another footy magic moment that took place behind the microphone rather than on the field, back in the 70's.

Peter McKenna, a mop-topped Collingwood spearhead who became a TV star and singer on the back of his cult-hero status with the AFL Magpie masses, caused a sensation when he decided to join despised rival team Carlton in 1977.

In an interview with AFL media rep 'Howard Kotton', McKenna (now 71), was quick to point out the club he played for before joining Carlton was the Devonport Magpies in 1976 when he moved to the Apple Isle to accept a teaching appointment.

"The way people made out over the years was that I walked out on Collingwood to go to Carlton and it wasn't like that at all," he said. 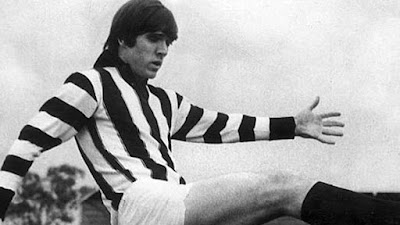 McKenna had retired from League football in 1975 after losing part of a kidney playing for Collingwood reserves.   After a season in Tasmania, the star full-forward returned to Victoria determined to have one last crack at the big time. 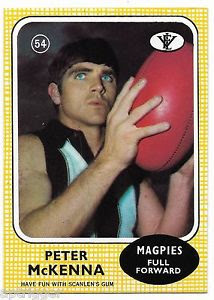 He completed the pre-season under new Collingwood coach Tom Hafey and was in supreme physical condition.  Despite performing well in the practice matches, the Magpies' offer to the spearhead was far from adequate and reluctantly forced him to look elsewhere.

"I really don't think Collingwood wanted me," he recalled. "They offered me a pittance to play – it was $300 a game and if I got dropped to the seconds I would get $100 a game.   "I said: 'How about making it $300 a game regardless?' and they said no. I just thought that was unfair."

McKenna fielded offers from several clubs including Fitzroy and South Melbourne before deciding to join the Blues, a club he respected immensely [extract from the AFL website]

In relation to Peter McKenna producing a pop record, his first single was released just before the 1970 Grand Final (coincidentally Collingwood were the runners up in that Grand Final as well) and was titled "Things to Remember". McKenna release another single in the following year entitled "Smile All The While" which was written by Johnny Young.

McKenna's voice is OK, and he carries a tune just fine, with no flats or sharps, and for 1970 it wasn't that bad. That said, it ain't that great either! He didn't really push his range or vocal ability, and to be honest, the song is an American sounding stinker. Neither of these releases were a success and only stalwart Collingwood supporters probably picked up these recordings making them somewhat of a rarity.

One thing that McKenna will be remembered for (and not his singing) is his kicking style that revolutionized football. He was the first player to adopt and perfect the drop punt on a full time basis and his accuracy was astounding. This led to other players gradually taking it up and the game became faster and more precise as the drop kick and torpedo (which were notoriously hit and miss and took longer to execute) were phased out.

He was a true pioneer and champion of the game, in fact he took on Beatles like cult status among the Collingwood supporters as he was the first player to grow long hair, young girls behind the goals would shriek and squeal with delight whenever he went near the ball and every game was like a pop concert, there will never be a time like it again.
. 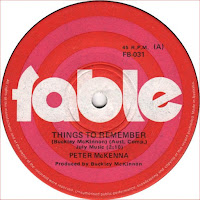 So this month's WOCK on Vinyl post is a mixed bag, the O is definitely for Obscure (thanks to Ozzie Musicman for providing these rarites) but the W&C are for West Coast who stole the match from Collingwood today!    Post consists of MP3's (320kps) ripped from vinyl and includes label scans from both 45's 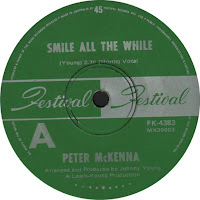