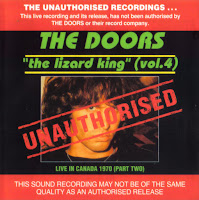 The fact that this is one of the very few recorded shows the Doors haven’t released commercially tells you all you need to know really. Recorded by the Doors Road Manager Vince Treanor, the actual performance was an ill tempered affair with Morrison drunk and off target for most of the show. The 15,000 venue was just a third full with the crowd hostility seemingly throwing Morrison off track. Sound problems dogged the concert with long breaks between songs doing nothing to help the crowd tensions.

This post consists of 68 minutes of solid show that compares well with the many other live Doors performances available. There is some sound bleed-through or tape hiss in the quieter portions but there are not many of those and unless you are using headphones they should not be of concern. Overall this is a decent quality recording with very strong organ including the bass range and there are some notable lead guitar parts. Apart from the location (Seattle Centre Coliseum), list of tracks, source (KRAB-FM) and date (5th June 1970) there is no background information or booklet. The audience is active but not intrusive and expletives are minimal.

Seattle Concert, 5th June 1970
Seattle, June 5th 1970 wasn't a very good night for the Doors. In fact it was a pretty bad show, disastrous even when compared to some of the outstanding concerts they had produced earlier on that year. Yet this doesn't stop bootleggers and publishers of semi legal albums from revisiting the concert - read: from making easy money on it - time and time again. Not surprisingly of course.
The legend and popularity of the Doors lives on, and with each new generation of fans comes the need for more than what Elektra and Rhino have been and are giving us.

Sadly, the tracks 'Light My Fire' and encore 'The End', abruptly terminated before completion by the venue management cutting off power, haven't surfaced yet - I should add that they are assumed to have never been recorded by at the time road manager, Vince Treanor; but you never know...

Perhaps the biggest bonus with this release is the inclusion of the song that makes the concert an interesting one despite its flaws: 'Someday Soon'. A rare one in the Doors catalogue, never tried for in the studio, performed in concert a handful of times only.

This is the Doors history, people! And more so than any other taped concert, Seattle 1970 reveals a hard working quartet of men - of humans, having an off day. [Extract from doors-quarterly-online.com] 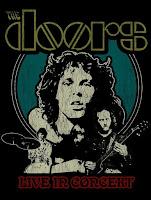 Ripped from CD to MP3 (320kps), this bootleg recording is excellent quality and covers some of the best concerts played by the Doors over a three year period. Full album artwork (the usual fireman red covers) are included along with covers for alternative bootleg releases.

Sources: Seattle Center Coliseum, Seattle, WA on 5th June 1970.
Known as the 'Lizard King' because of the leather pants that he wore during his concert performances, this Vol.3 bootleg release highlights why Jim Morrison and the Doors were considered to be one of the biggest acts of the late 60's and 70's.

Note: One track missing on this release from the official set list is "Five To One", however it appears on Vol.2 of "The Lizard King" series instead. Unsure why Banana chose to do this, as there was plenty of room on the CD to accommodate both of these tracks. 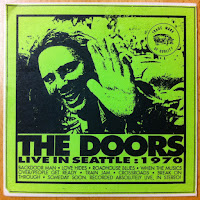