Flash And The Pan - Waiting For A Train (Various 12" Remixes) 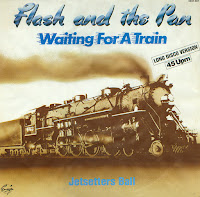 Flash and the Pan was an Australian new wave musical group (essentially an ongoing studio project) initiated during the late 1970s by Harry Vanda and George Young, both former members of The Easybeats. The duo's first success was their debut album with single "Walking in the Rain", which was later covered by Grace Jones. This album was successful in Europe, the UK, and the US. Formed as a creative release for writer / producers Harry Vanda and George Young, singles like "Hey St. Peter", "Down Among the Dead Men" and "Walking in the Rain", established a momentum that proved difficult to stop. Combining masterful song writing and a decidedly bent world view Vanda and Young managed to create a string of hit albums - attracting a vast and loyal international fan-base in the process. In 2017, George Young died at the age of 70. 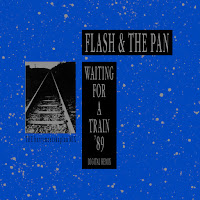 Early on in Flash and the Pan's history, Harry and George had tried to involve Stevie Wright in the project. He declined at the time because it was not a direction in which he wanted to go. However, for the third Flash and the Pan album, Stevie Wright was mentioned as part of the official line-up on the cover notes along with Harry, George, Les Karski (bass) and lan Miller (guitar). Additional players cited included Lyndsay Hammond (Cheetah), Ralph White, and drummers Ray Arnott, Johnny Dick, and Alan Sandow (Sherbet). The press release announced, 'Headlines brings into firm focus the always-present contributions of vocalist Stevie Wright who now assumes a more prominent position in the group.' He also appears in the promo photo.

In reality, Stevie Wright was not involved in the making of the album. Because of the constant pressure to tour and promote, Harry and George had hatched an ambitious plan to put together a band to tour the album for them while they remained at home. A recently recuperated Stevie Wright would play the role of Flash. As always, Stevie's sobriety was not to last and the plan did not come to fruition. Later pressings of the album removed his name from the credits.
Headlines became their third successive No. 1 album in Scandinavia. It still used the Flash and the Pan format, only it was much darker. Guitars took equal billing to keyboards. Toby Creswell reviewed it for Rolling Stone: 'Headlines'is a more sombre record thematically than their poppy hit singles of a couple of years ago, and in their songs they paint a rather schizoid picture of contemporary society. For example "Jetsetter's Ball", which presents images of rampant corruption and false values in society.

Waiting For A Train
"Waiting for a Train" perfected the 'Walking in the Rain' formula with its spoken lyrics, keyboard accompaniment and unique percussive effects. Lyrically, it is simply the meaningless musings of someone who is waiting for a train to arrive at a station. It was released as a single in Australia in December 1982 and barely troubled the Top 100 (No. 98). It did reasonably well in New Zealand (No. 26) and incredibly well in the UK where it peaked at No. 7 on 25 June 1983. They were in great company this time. The artists above them in this chart were the Police (No. 1 with 'Every Breath You Take'); Rod Stewart, David Bowie. Irene Cara ('Flashdance'), Wham and Elton John. Peaking at No. 8 that week was Michael Jackson's 'Wanna Be Starting Something'. 'Waiting for a Train' became a DJ anthem with numerous club and radio jocks adopting the track as their theme music. A 12-inch 'Long Disco' version was released in Germany in 1983 and then later remixed by DJ KK in Germany to be released in 1989 (called the Harrymeetskaplan Mix).  [extract from Vanda & Young: Inside Australia's Hit Factory. By John Tait, 2010. p189-190] 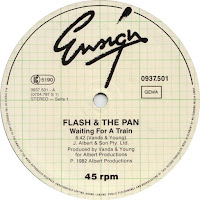 This post consists of two rare 12" Single releases of "Waiting For A Train", ripped to FLAC from my newly acquired vinyl which I came across at a Bazaar in Geelong.  Full album artwork and label scans are also included.  Having searched on the Internet, these two international releases (German and English) do not appear to be common and therefore I suspect that this post will please the avid collectors of anything Vanda and Young related, especially in light of the recent death of George Young.  The '89 remix is probably my favourite, and the added bonus of Hey St Peter on the flip side makes this release great value.  Note: The front and back covers of the Long Disco release are identical.
.
Long Disco Version '83 - Ensign Records 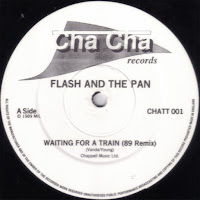