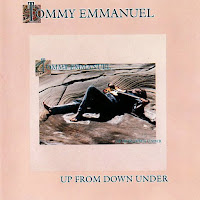 Two-time Grammy nominee Tommy Emmanuel is one of Australia’s most respected musicians. The legendary guitarist has a professional career that spans five decades and continues to intersect with some of the finest musicians throughout the world. A household name in his native Australia, Tommy has garnered hundreds of thousands of loyal fans worldwide.

He is undoubtedly Australia's finest ever all-around guitarist. It is also fair to say he is also one of that country's best drummers... and bass players! Tommy began playing guitar at age 5 and touring Australia from age 6 with the Emmanuel Family Band. He has since played throughout Australia with the likes of Stevie Wonder and Bob Marley, recorded with Air Supply, played in Nashville with Chet Atkins, and recorded and toured Australia & Europe with leading Australian group Dragon/Hunter. This gives testimony to Emmanuel's amazing ability and variety of guitar styles, which are further exhibited on his other Artful Balance Records, namely "Artfully Beatles" and on his own debut solo album. 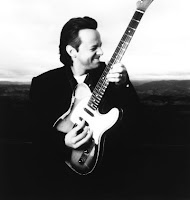 An accomplished finger style player, Emmanuel frequently threads three different parts simultaneously into his material, operating as a one-man band who handles the melody, the supporting chords and the bass all at once.

Tommy’s unique style – he calls it simply “finger style” – is akin to playing guitar the way a pianist plays piano, using all ten fingers. Rather than using a whole band for melody, rhythm, bass, and drum parts, Tommy plays all that – and more – on one guitar. Guitar legend Chet Atkins was one of the first to inspire Emmanuel to try this “fingerpicker” style as a child. Decades later, Atkins himself became one of Emmanuel’s biggest fans. 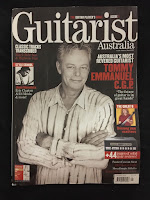 There’s a science to assembling the parts, and Emmanuel’s technical gift has earned him multiple awards from Guitar Player magazine and made him a Member of the Order of Australia, an honor bestowed by the Queen in his homeland. But the average fan could listen without even considering the precision behind the work, focusing instead on the artful tension and release of Emmanuel’s melodies.
Playing instrumental music that works in any language and travelling nimbly with a small tour group of three – Emmanuel, a sound engineer and a merchandiser – he was able to build a global audience that encompasses not only Australia, but the U.S., the United Kingdom, Europe and Asia. 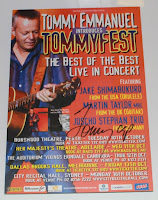 Tommy Emmanuel is an honorary Kentucky Colonel, a CGP (Certified Guitar Player – a title given by Chet Atkins to only 5 guitarists in the world), an Order of Australia Medalist (AM) and the holder of both an honorary Master’s Degree (MA) and more recently an honorary Doctor of Arts (DR) from Charles Sturt University in Australia in recognition of his commitment to rural Australia and his contribution to music education.

'Up From Down Under' was recorded in 1987 and was produced by Tommy Emmanuel and Rod Tamlyn. It contains many audience favorites including arrangements of the Beatles Lady Madonna, Michelle, and his concert show-stopper, "Inititiation" – dedicated to the Aboriginal peoples of Australia. 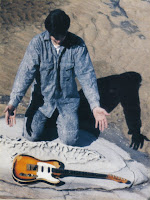 While listening to this album, I am reminded of some other brilliant guitarists like Jan Akkerman (Focus and Brainbox), Al Di Meola and John McLaughlin and place Tommy up with the best.  Best tracks on this album are the Up From Down Under, Raindance, Daybreak and Initiation but the remainder are certainly no fillers, each having its place on this rare release from Tommy. 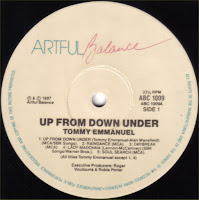 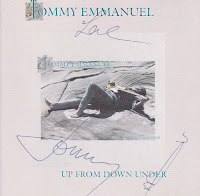