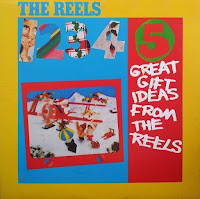 The Reels formed in Dubbo in 1976, disbanded 1991, then reformed 2007. Initially the Reels apparently styled themselves in reaction to 'dark/heavy' fashion and made upbeat music with a ska-pop emphasis while adorned in bright moddish clothes. However, they became best known for their most melancholic and hauntingly bleak music. The mournful tale of alienation, Quasimodo's Dream (1981) was voted as a "Top 10 Australian song of all time" by the Australasian Performing Rights Association (APRA) in 2001. It has a cinematic gothic-styled story video - see it in the Youtube playlist below. The album of the same name was listed in a 2010 book as one of the top 40 Australian albums of all time. The Reels had top 10 success with covers of "This Guy's in Love With You" and their slowed down icy synth-based version of "Bad Moon Rising". 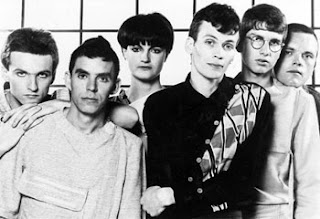 The Reels released the EP ‘Five Great Gift Ideas From The Reels’, just in time for the festive season, and in part because recording of their planned second album was turning into an epic. The EP featured, not surprisingly, five tracks, and aside from the jovially titled ‘The Bombs Dropped On Xmas’, the highlights were covers of the 1971 Freda Payne soul classic ‘Band Of Gold’, and the song which was identified as the ‘single’ release, ‘According To My Heart’, originally recorded by country crooner Jim Reeves in 1961. The song was about as far removed from a contemporary pop-rock hit as you could get, complete with Western motif promo video, but its inherent charms couldn’t deny The Reels their biggest hit to date (OZ#12), aided in no small part by an equally charming promo video, shot at the ranch of Australian country music legend Smokey Dawson (part of the medley B-side to The Reels 1980 single ‘After The News’ was ‘Media Themes For The Smokey Dawson Show’). Incidentally, ‘Five Great Gift Ideas From The Reels’ had been co-produced by Bruce Brown and Russell Dunlop.
. 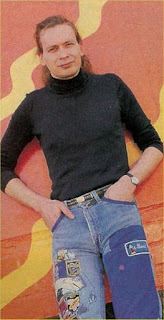 The Reels: An Astonishing Facts Special
Although the Reels have been around for absolutely yonks, it's been ages since they've had a hit single. Now, Bad Moon Rising has changed all that but did you know....

- Up until recently Dave lived on a farm just outside of Newcastle. He now lives in Kings Cross with his dog Poopy (so named because when she was a pup she used to shit everywhere) and three cats, Mother, Mother baby and Kit

- Dave buys his clothes at OP shops because new ones are too expensive.

- Dave is a big fan of soap operas. His faves are, in order, Dallas (the ultimate), Prisoner, Falcon Crest and the Colbys (cos I like Barbara Stanwyck)  He doesn't like Dynasty, occasionally watches Day Of Our Lives and says that JR (Dallas) is his role model in life. 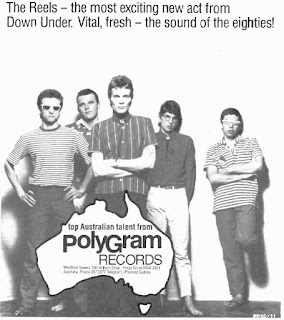 - Dave once sang a medley of the history of duets with sixties songstress Little Patti (Chrissie Amphlett's cousin) The reels were to record "Bad Moon Rising" as a duet with Nick Cave (gloomy Aussie singer) Dave still wants to make a record with him as well as a harmony album with Kate and Zan (of I'm Talking) and Sherine (from Big Pig, also Zan's sister)

- Dave thinks he'd probably come ten millionith in a list of the world's most fanciable men. "I'm not into that. That's what models are for. I'm a dog"

- The Reels once did a tour in Sydney called The Freak Show (named after the character in Prisoner) after it was announced that Prisoner had been axed. The Freak herself was supposed to go to one of the shows and sing with Dave but 'chickened out'. The Reels have long included a 'country and western pulls the heart strings' type version of the Prisoner theme song 'On The Inside' in their live set

- The Reels were going to release a version Marvin Gaye's "What's Going On" as their next single until they found that Cyndi Lauper had already released one.

- The Reels once recorded a heavy metal album that was never released. Says Dave "We employed heavy metal techniques and filtered them through synthesisers so we came out with this sound and its...it's...unbelievable!  We'll release it one day when the world's ready for it".

- Dave wants to grow his hair so that when he's fifty "it'll be really long and grey". If he ever has it cut, he'll have a wig made out of his hair. 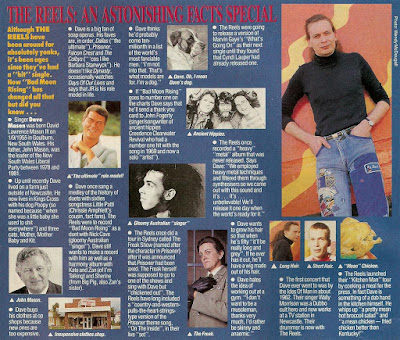 - Dave hates the idea of working out at a gym. "I don't want to be a muscleman, thanks very much, I'd rather be skinny and anaemic".
- The first concert that Dave ever went to was by the Ides Of Man in about 1962. Their singer Wally Morrison was a Dubbo cult hero and now works at a TV station in Newcastle. Their drummer is now with The Reels.

- The Reels launched their 'Kitchen Man' tour by cooking a meal for the press. In fact Dave is something of a dab hand in the kitchen himself. He whips up "a pretty mean hot broccoli salad" and "a mean chicken - fried chicken better than Kentucky!"
. 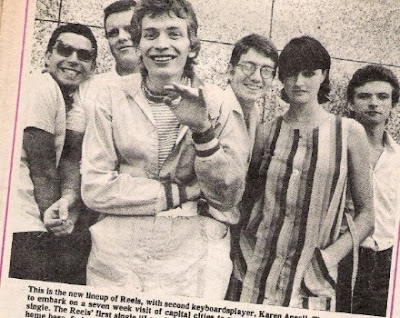 So folks, this is my final post for 2016 and it is My Great Gift Idea for all my blog followers. I hope you've enjoyed the many offerings that were on the table at ' rockonvinyl ' during the year, but be assured that I have plenty more to post in the new year and I look forward to seeing you all back in 2017.
Remember to drop me a line or two in the comments, if you like what you hear or simply have a request or two, and I'll do my best to accommodate.
.
This post consists of  FLACs ripped from my pristine vinyl and includes full album artwork and label scans.  Also included is a scan of the article from which the astonishing facts about The Reels were taken, but alas I am unsure which magazine it was sourced from due to my poor filing. My favourite track is of course "According To My Heart" while the other 4 tracks are equally entertaining.  Enjoy.
.
Track Listing 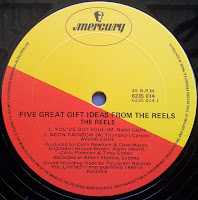