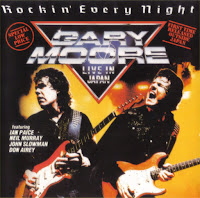 'Rockin' Every Night - Live in Japan' is a live album recorded by Gary Moore at Tokyo's Shinjuku Kousei Nenkin Hall in 1983, during the 'Corridors of Power' tour. Despite being released in Japan in 1983, it was not given a European release until 1986. The 2002 CD reissue included the three live tracks recorded at the Marquee, from the bonus EP included with the first 25,000 vinyl copies of Corridors of Power. 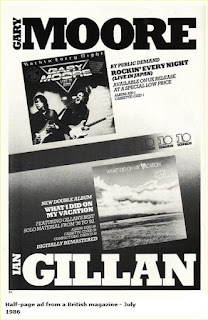 'Corridors Of Power' was released in September 1982, and reached #30 in the UK album charts. A new touring band was put together to promote it. Don Airey had already toured and recorded with Moore for some years. Vocalist Jon Sloman (ex of Uriah Heep) had briefly participated with Neil Murray and John Sykes in Badlands, a band which lasted a mere two gigs before Sykes took up the offer of a place in Thin Lizzy and Murray decided to go full-time with Gary Moore.

The new line-up began gigging in November 1982 and were captured on the live album 'Rocking Every Night' issued only in Japan initially, and taped there in January / February 1983. It was released in the UK in 1986. Sloman packed it in around February time, having had voice problems throughout the tour, so from May 1983 the group were down to a foursome. [extract from deep-purple.net]
. 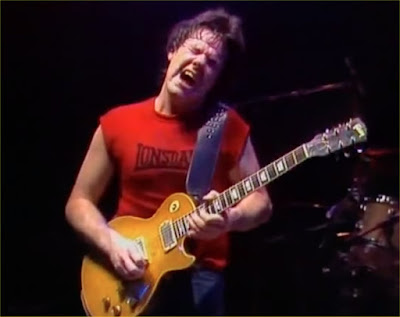 Gary Moore Bio
Born in Belfast, Ireland, Moore began as a bluesy guitarist influenced chiefly by Fleetwood Mac's Peter Green (going as far as purchasing Green's actual Les Paul guitar, which served as Moore's main axe throughout the years). Moore first recorded with Dublin rockers Skid Row, before beginning an on-again/off-again relationship with Thin Lizzy throughout the Seventies. Moore's first Lizzy stint was short-lived, but yielded a memorable solo on the group's classic ballad, "Still in Love with You," from their 1974 album, Night Life. When Thin Lizzy opened for Queen during a 1977 U.S. arena tour, Moore (who was also playing with prog rockers Colosseum II) briefly filled in for Lizzy guitarist Brian Robertson. 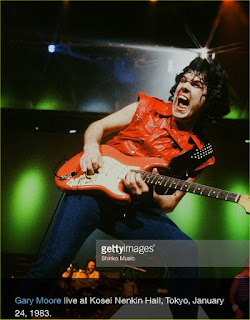 By 1978, Moore was a full member of Thin Lizzy once more, performing on what's considered one of the group's finest studio albums, 1979's Black Rose: A Rock Legend, which debuted at #2 on the U.K. album charts. The album's epic closing track, "Róisín Dubh (Black Rose): A Rock Legend," contains one of Moore's greatest solos, in which he incorporated several traditional Irish song themes within a hard rock format. The same year, Moore scored his first solo U.K. top ten hit, "Parisienne Walkways," co-written by Lizzy frontman Phil Lynott. But Moore would exit Lizzy for the third and final time in the midst of a U.S. tour that summer. 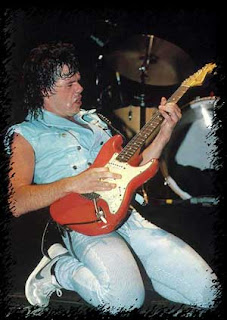 In the Eighties Moore scored other hits, including the U.K. top 5 single/Lynott collaboration, "Out in the Fields" (one of Lynott's last recorded works before his 1986 death), and was name-checked by guitarists like Dio/Whitesnake/Def Leppard shredder Vivian Campbell. By the Nineties, Moore had returned to his blues roots, winning his biggest U.S. hit with the gold-certified album Still Got the Blues (which featured contributions from Albert King, Albert Collins, and George Harrison). Moore continued collaborating with others (including Cream's Jack Bruce; Ginger Baker, in the short-lived BBM in 1994; and B.B. King, on tour in 2006) and issuing solo albums, the last being 2008's Bad for You Baby. 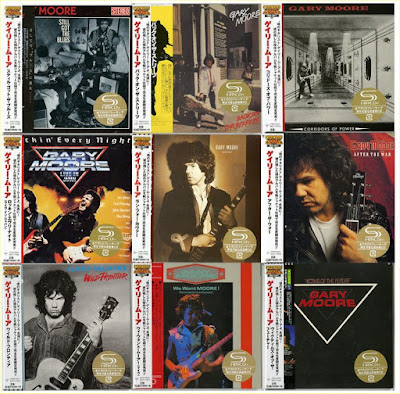 Gary's Guitar Playing
Moore picked up the guitar at the age of eight, inspired by the music of Elvis Presley, the Shadows and the Beatles. But his strongest influences were John Mayall’s Bluesbreakers guitarists Eric Clapton and Peter Green, as well as legendary electric blues progenitors Albert King, B.B King and Albert Collins. 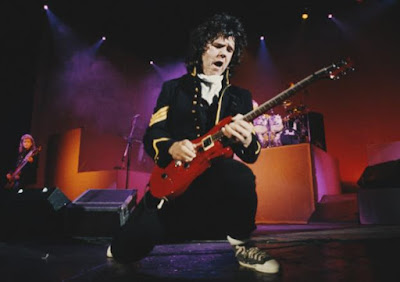 Another important influence was Jimi Hendrix; Moore would regularly include Hendrix’s slow blues “Red House” in his live shows. Though Moore was often seen playing a beautiful Fiesta Red 1961 Strat, his signature sound is more closely associated with the beloved 1959 Les Paul Standard that he played for many years.

He purchased that guitar from Peter Green in 1970 and, fittingly, used it to record his 1995 tribute to his mentor, Blues for Greeny. 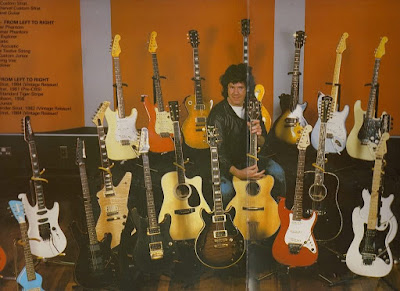 Often, Moore would begin a song using the warm tone of his Les Paul’s neck pickup, with which he would perform melodic, vocal-like lines, then switch over to the bridge pickup for his solos to achieve a more aggressive and biting sound. Moore often employed a fair amount of gain—courtesy of Marshall heads (often JTM45s), 4x12 basketweave Marshall cabinets and Marshall Guv’nor and Ibanez Tube Screamer pedals—and was known for conjuring tremendous sustain, such as the celebrated “endless note” featured in his live performances of his classic song “Parisienne Walkways.” [extract from guitarworld.com]
. 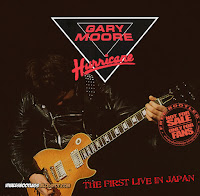 This post consists of MP3's (320 kps)  ripped from CD and includes full album artwork along with a wide range of photos, some of which are featured here.  I have followed Gary ever since I first heard him play with Thin Lizzy and have rated him in my top 10 best axemen.  Although this is not his best live album (see We Want Moore if you really want some kick arse guitar work) it is still a necessary recording to have in your collection.  I have taken the liberty of adding a couple of must have bonus tracks, namely "Parisean Walkways" and "End Of The World", both taken from the 1982 Reading Festival.
Yep, it might be a cliche, but the moore you hear, the moore you want when it comes to Gary Moore.
(Note: The full concert has been released as a bootleg under the title "Hurricane" - see cover above)
.
Tracklisting 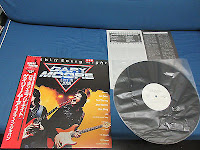 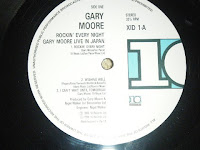 Moore did the lead vocals on Wishing Well and Back on the Streets while Sloman (ex Lone Star, Uriah Heep) sand lead on Rockin’ Every Night, Nuclear Attack and Rockin’ and Rollin’.  Duties were shared on I Can’t Wait Until Tomorrow and the other two original tracks are instrumentals.
.
Gary Moore Live In Japan Link (113Mb) New Link 02/05/2020
.
Posted by AussieRock at 9:12 PM