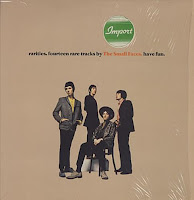 If  'The Who' were the mid-'60s heroes of West London's Mods, then The Small Faces sprang from their East London equivalent. In 1965 they broke into British charts with single "Whatcha Gonna Do About It?" and the whole country picked up on this physically small and sharply-dressed group, led by a former child actor Steve Marriott who was later to admit that he could barely play guitar in early days.
Original group contained Jimmy Winston on keyboards, but he was replaced by MacLagan immediately after first success and above was best-known line-up of band which continued to dominate U.K. singles charts over next three years. "Sha La La La Lee" was a second smash, followed by "Hey Girl", "All Or Nothing" (their first No. 1), and "My Mind's Eye" in 1966; "Here Comes The Nice", "Itchycoo Park", "Tin Soldier" (1967); and "Lazy Sunday" and "The Universal" in 1968.
. 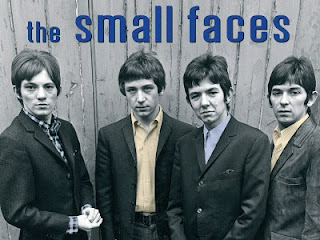 As time went by, group and Marriott in particular grew frustrated by label of Top 10 singles band. They tried hard with albums, but the results were never satisfying - not until the Ogden's Nut Gone Flake collection which charted at No. 1 in 1968. With its revolutionary circular cover, this has since been accorded quasi-classic status.
In 1969, Marriott left to form Humble Pie. Lane, Jones and MacLagan survived this near-fatal blow, eventually re-grouping as Faces with Ron Wood and Rod Stewart and going on to surpass Marriott's Pie in success and acclaim. Eventually both bands went sour.
Eight years later in March 1977, with Rick Wills in place of Ronnie Lane, Small Faces reconvened to make a fresh start. [extract from The Illustrated New Musical Express Encyclopedia Of Rock, Salander Press, 1977. p212-213]
. 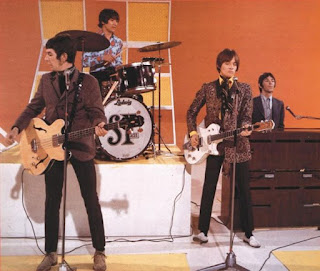 .Rarities - Linear Notes
Here come the nice... - fourteen rare tracks recorded by the great Small Faces between 1967 and 1969.
Sources: The songs featured on side one were all previously released on the 'From The Beginning' LP (Decca LK4879; identical German edition: 'Musik fur alle', Teldec ND153), both of them being non-original albums then, and deleted for many years now. Later on some of the gems appeared strewn around on other compilations here and there.
The eight takes on side two are sort of a mystery. Track one to seven were released for the first time in 1975 on a US low-budget album, falsely credited to "Rod Stewart & The Faces" (Springboard SP-4030, deleted as well), though there was neither Roddie nor The Faces on those tracks. Furthermore nearly all of them had been given wrong
titles,like "Anything" or "Sparkey Rides", to name but two. It was obviously the Small Faces playing somewhat obscure versions of their well-known compositions that did not appear anywhere else on record up to now. If's mostly longer alternative cuts, varied mixes and even a rough instrumental take of 'Tin Soldier". Track No. 8 was found on an Italian cheapo album credited to Rod Stewart again ("Ridin' High", Joker SM 3985), though if's the Small Faces with a different, prolonged version of "Wide-Eyed Girl On The Wall".
Nobody seems to know where the songs hail from but it's a fact that they are available again. And that's what counts [Linear Notes written by Bemd Matheja]
.
This post consists of two parts: the first is a German only 14-track compilation LP of obscure and hard to find Small Faces rarities recorded between 1967 & 1969 with picture sleeve, featuring an instrumental take of their hit "Tin Soldier". The files are in MP3 (320kps) format, ripped from my "mint vinyl copy" which was still sealed in it's shrink wrap when I found it at a flea market some weeks ago, and full album artwork is included.
The second part consists of FLACs ripped from my 'well worn copy' of their 1967 E.P entitled 'Tin Soldier' and again features full album artwork and label scans. 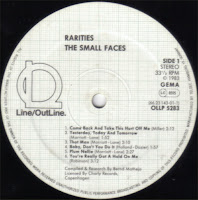 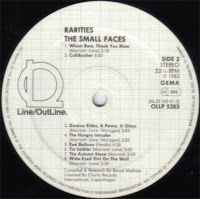 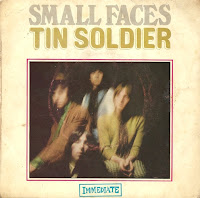