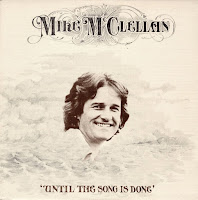 Mike McClellan: Strong Roots, new reflection  (Rolling Stone Magazine Feature Article)
A year ago I reviewed Graham Lowndes' excellent album 'Survival's A Song' and in the course of the review I attributed the song "Suzi Get Off This Train" to Graham. I was most embarrassed a couple of days later to hear that Suzi was written, not by Graham but by his friend Mike McClellan. What's more, I was informed, Mike was furious and intended to write and tell me of my error in no uncertain terms. I waited in trepidation.
Many months later much of the force of Mike's anger had dissipated - so much so that he laughed at the mention of the incident, though I did take the chance to apologise and offer a brief defense: how was I to have known that Australia had two brilliant songwriters secreted away in its coffee lounges, struggling to earn $15 a gig?

Well, at last it looks like things are changing for Mike. His current album 'Ask Any Dancer' has been released in the UK, its release looks imminent in the United States and towards the end of June this year he plans to go to England where he will record his next album "Until The Song Is Done". But he is taking it all in his stride: "The reaction from England and America has been very pleasing but I'm trying not to get to optimistic. If it happens,it's great, if it doesn't, I'll just keep going and continue to work at it."

My first encounter with Mike was at a crowded jostling EMI reception where conversation was limited to my shouted apology and Mike's rejoining laughter so it was with some relief that we met a day later in the quiet of the afternoon. Mike, a resident of Sydney, was in the midst of 'doing' Melbourne, from radio station to radio station, but he still acted like a man with time to spare and sat back, relaxed and easy, as our kitten played on his knee and he talked about his past and present, his influences and his future.
"My favourite single of all time came out in the early 60's: "You Can Have Her, I Don't Want Her' by George Hamilton. It was a magnificent single. It flattened me when I first heard it and I flogged it and flogged it" 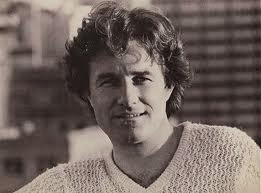 On balance, however, rock music was a minor influence on the young McClellan. Coming from what he describes as a "very conventional family background" his love of music during his high school years was channeled away from rock and roll into the church choir, school concert productions and musical comedy. If fact during these years he turned his attention to straight drama, winning a scholarship to NIDA in '62. His family however, prevailed on him to postpone his acting career in favour of the relative security of a teachers' training course and in 1963 he wound up at Armidale Teacher's College for what he feels were the two most important years of his life.

"It was my first opportunity to get involved with music away from my home environment. I started playing guitar when I was even playing drums in the college band. I was a shithouse drummer - I had a good sense of rhythm but no technique at all. About that time Peter, Paul and Mary were making an impact and I was really keen on their guitar arrangements. I was also listening avidly to Doc Watson and an incredible 12 string acoustic guitarist and banjo player who was backing the Chad Mitchell Trio then, who turned out to be Jim (roger) McGuinn of the Byrds."

On vacations to Melbourne and Sydney, Mike extended his interest from folk and rock to blues. Those were the days of Trevor Lucas, Martin Wyndam-Reid, Brian Mooney, and most importantly for Mike, Paul Marks. "Paul was a fine guitarist", he says, "the best of his kind in Australia then and he was singing and playing the blues - he was using jazz arrangements and doing his own material as well as songs by Broonzey and others. It was Paul who was responsible for getting me into the blues." 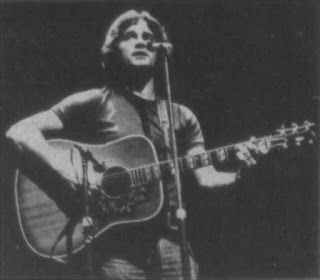 By 1966 after a year's teaching in the country Mike was back in Sydney doing some fancy blues and country picking around the folk clubs. It was about this time that he came together with Graham Lowndes and with a third member, Derek Robinson, they formed the Currency Blues Co, a band they still remember with affection.
"Graham introduced himself one night in Sydney and asked if he could sing with me, he said he sang a bit of blues. Thin little weedy Graham. So I thought of yeah, and said alright, come and have a sing. I started to play and out comes this magnificent voice - I nearly fell off the floor, it was incredible."
Mike continued playing around the clubs and teaching until the end of '69 when he joined the chorus of Barry Crocker's TV Show, Sound Of Music. This rather amazing turn of fortune came about through New Faces.  My wife used to say go New Faces, you can do better than those mugs and I'd say oh no, so she sent my application form and I wound up winning about 1800 bucks which I didn't complain about. The show was a load of rubbish though and I go on to the Sound Of Music because they had to make it
look as if New Faces lead somewhere. When the show folded I went back to teaching."

Since then Mike has been singing and playing solo and he has finally given up teaching, this time for good. In the past few years his songwriting has gone from strength to strength. "My early songs were desperately self-conscious and terrible naive. In the 60's I depended mainly on other material."
He enjoys playing solo, primarily because his first love is the acoustic guitar which would tend to get lost in most electric bands. At present on stage Mike alternates between his sixteen year old Gibson Hummingbird and his two Martins, a D35 and a 1938 017. "I also rather like to be totally in control of a performance. I'm not a very strong singer and my songs work best in live performance with a limited accompaniment."  On record however these difficulties are easily overcome and both Mike's albums make use of accompaniment and orchestrations to further develop his songs. 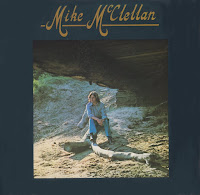 His first album 'Mike McClellan'  was released in June 1972 and though it received some excellent reviews, nothing much came of it. "The record company ATA did nothing to promote it, although they did manage to get out a poster three months after it had been released but it received no airplay to speak of."  His second album, Ask Any Dancer was released by EMI in September 1974.

Unlike so many musicians, Mike's love of music extends beyond his own work and much of his free timer is spent in listening to and enjoying others, Two Australian musicians who sprang readily to mind as favourites of Mike's were Graham Lowndes: "he's the most electrifying singer I have ever heard" and Jean Lewis: "a fine fine singer". McClellan's name has long been associated in the public's mind with these two musicians as well as others like Margaret Roadknight and Bob Hudson, and I asked him what those musicians had in common. 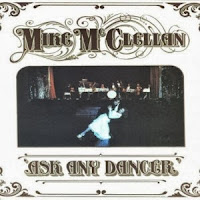 "Apart from the shows that we have done together, I tend to think of us as survivors of an era that is long past. I think our main bond is that most of us started out in the folk era and through determination and a strong belief in what we are doing, we are still around.  It has been difficult for us all - survival would have been impossible for me if I hadn't had teaching as well as music to support my family. In that way I guess I'm different to the rest: I've got a family, a couple of Kids, a mortgage, I drive a car - I enjoy and in a way - need all the middle class trappings.

The list of overseas favourites could be endless but it includes Dobie Gray, "Drive Away" was the first single I bought in years", David Ackles, Paul and Mentor Williams, Joni Mitchell. Jerry Jeff Walker, Steely Dan (particularly Katy Lied), Randy Newman and most recently Martha Reeves and keyboards player and singer/songwriter Michael O'Martian. 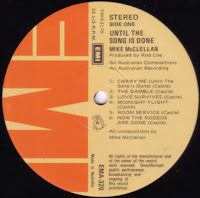 As far as Mike is concerned, things are looking up for the Australian Musician. "No longer do you have to make excuses for Australian records. Our recording facilities are equal to those overseas and so are the cream of our musicians. If we spend the right amount of time and energy we can make a musical product that is as musically polished and valid as anything they can produce in America. I tend to think that the material that we send overseas has got to be not as good but just a little better than the overseas product, since the record company who will make or break it has got to be able to say obviously there is something here and we will spend a lot of money to get an unknown artist off the ground. 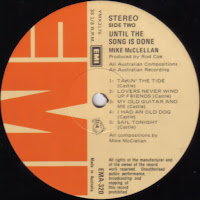 To add to his chance of success, Mike signed in February with a new manager Robin Britten, whose management of the Hollies has already proved his value. But if for any reason Mike's assault on the big time fails this time around, after almost 10 years in the business he is not likely to give up now. As he says in "One Man Band " (from his latest album), "...somethin' inside keeps pushin' me on/so I shuffle my blues through a worn out tune/and I carry on".   (Article written by Margaret MacIntryre, Rolling Stone Magazine, May 8, 1975. p43)
.
This post consists of FLACS and MP3's (320kps) ripped from my vinyl (ex condition) and includes full album artwork and label scans as per usual. This is a great album and if you liked his first album, then you're gonna love this one. My only criticism  is that the last track "Sail Tonight" wears a little thin after awhile, with the chorus being repeated over and over again for the last 3mins of the song. Although a catchy tune, this repetition spoils what could have been a great single, if he had shortened the chorus by several minutes.. 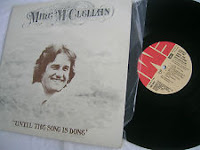 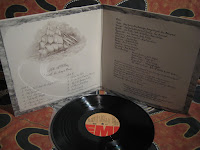