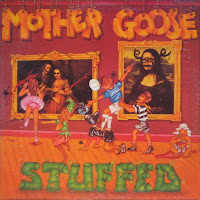 In late 1975, six New Zealand rock musicians wanted to play rock music well, but found that modem music was made up of pomposity and pretentiousness. They decided to break down the artifice by mocking themselves, so they came up with a name they considered low-brow - "Mother Goose" - and took to wearing humiliating costumes. Each member of the band dressed as a distinctive character;


Craig Johnston was a sailor,
Marcel Rodeka was a pixie,
Denis Gibbins dressed as Minnie Mouse,
Peter Dickson a baby (complete with nappy),
Steve Young was a ballerina and
Kevin Collings was a Bumble Bee.

Moving to Australia, the band started playing at Cloudland in Brisbane and at the Playroom on the Gold Coast in Queensland in late 1976. They eventually came to the attention of Mushroom Records who signed them. Their debut album, Stuffed (1977), became Mushroom's fastest selling album, and the first single, Baked Beans was a hit across Australia. 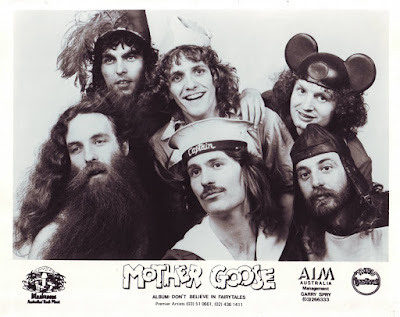 By June 1978, the six original members of Mother Goose and Garry Spry their personal manager had moved to the USA and were living in Hollywood, with their own recording studio and signed to the hugely influential Scotti Brothers Records. After five months of writing and recording demo's they performed a Grand Showcase for the Scotti Brothers to the whole West Coast music industry and blew everyone away. But by staying true to their early Dunedin vision, the band refused to bow to the pressure to conform to the American pop rock culture so they left the Scotti Brothers and moved to New York. 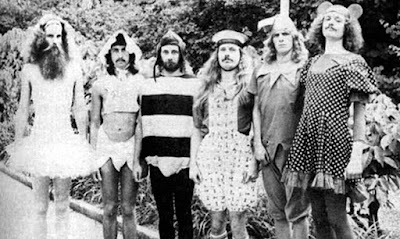 There they signed with entertainment agents "Mecca Artists" and with help of the former The Beatles American manager, Sid Bernstein they quickly became the biggest rock club draw-card in the city, playing residencies at "The Other End", "Trax" and at "The Great Gildersleeves" where members of Kiss and Devo became fans of theirs amongst other well known bands. Contractual battles with the Scotti Brothers, coupled with Mother Goose's refusal to become a Pop rock or Disco Band prevented the band securing a major recording contract on their terms, but they and their audiences had a good time anyway in their six months in New York.

During that time lead guitarist Peter Dickson left the band in February 1979 and returned to Australia and was replaced by New York Guitarist Justin McCarthy who adopted the costume of a toy soldier. McCarthy stayed with the band until they broke up in 1984.
The original Mother Goose line-up reunited for a one-off gig in Dunedin, New Zealand, on 23 March 2007.
.
THE YOLKS ON MOTHER GOOSE
(Article By Andrew McMillan, RAM Magazine 30th June, 1978. p32)
A couple of weeks ago. Mother Goose and her manager Gary Spry, boarded a Jumbo and flew north-east for the winter. And as they winged their way across the Pacific bound for America, the Geese knew they had a lot of problems to sort out. The biggest of them was that although they pulled crowds to most of their live shows they couldn't sell records. And the Geese realised it wasn't a problem confined to Australia. If they were to do anything in the States, Mother Goose would have to sell records. But that would be difficult - as their eighteen months in Australia had shown.
Mother Goose arrived in Australia in November 1976 witH $28 in the bank and a primitive P.A system. Their first date was at Brisbane's Cloudland Ballroom, a prestige venue of old, where State receptions for dignitaries like Prince Charles are held in the midst of refined surroundings and tiaras. Mother Goose's first gig was at Cloudland— supporting The Saints.
After six weeks work around Brisbane and the Sunshine Coast, Mother Goose moved onto Adelaide, then Perth and, when they felt the time was right, they hit Melbourne and scored a recording contract with Mushroom. During their first five months in Australia, the New Zealand band gained fast acceptance because of the live shows which took on the zany effects of the theater, quite divorced from the roots of rock 'n' roll. And people came back for more because - it was - fresh entertainment under the guise of rock 'n' roll? But, as their record sales later showed; few people took the music as any thing, except background wallpaper. And who could blame them? It seemed to take a poor second place to the visual show, ended up as a piece meal collection of styles ranging from hard rock to Glen Miller toons with flashes of disjointed disco in between. Disjointed was the operative word. And basically, the only thing holding it together in any tangible way was the theatrical, visual side of it.

So, very soon. Mother Goose became known as a great live band to see, "That's not our fault though," says sailor-capped vocalist Craig Johnston. "We never put more emphasis on our theatrics than our music. But the public do. That's our problem. The result of that problem is that you don't sell as many records as straight bands, so being known as a visual band does cause a lot of problems. It's something we have to live with." And in the next breath, Johnston says. "No matter how many people try to talk us into it, we can't cut out the visuals, because that's what Mother Goose is!"
But the Geese will admit that the visuals make "people very suspicious of the music." Keyboards player Steve Young sums it up like this: "It's like you're selling soap. Because it's very visual, you shouldn't really buy it, it's all a big sham. They think you're tricking them because it's visual."

And that's the problem Mother Goose are up against wherever they go. People like what they see, but often go away thinking it's a cover up for poor music. Which in Mother Goose's case, just ain't true, because as a band they can cut it — or five or ten minutes in every show. The rest of the time? It does seem disjointed mood music for the let's-all-make-idiots-of-ourselves-and-make-the-folks-laugh theatrics. 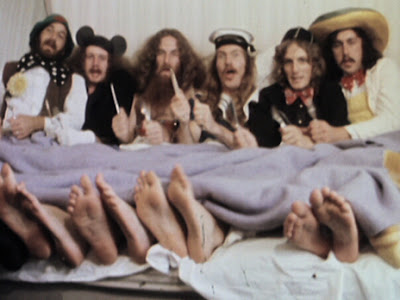 But even the once entertaining visual side of it gets a bit been-there&een-that after a couple of performances.
Or after just one! As one guest at a press reception held for the band at Chequers in Sydney said, "Well, that was okay. But how many times can a singer jump off-stage and run around the tables like a goon with a rag turtle in his hand?" That was last September, and when I mentioned it to Johnston a couple of days before the band's last performance in Sydney in late May, where he did exactly the same thing, he wasn't impressed. "That's the rationalisation. If we'd just stood there, they probably would've gone away happy. But by the same token, you could say 'well there's only so many times Daryl Brithwaite, can pull his microphone stand out and have it - like that. Or only so many times Status Quo can get down and go. . .' but that's quite acceptable. Why? Why is that more acceptable? You can also say there's only so many times Gene Simmons can poke out his tongue and bite blood capsules, but he does it all the time."
. 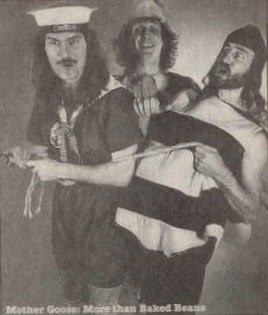 But somehow, people seem to find those stage mannerisms to be a little less blatant than some dude charging up and down the aisle beating people with a rag turtle three or four times every night.
But, for both Kiss and Mother Goose, the punters come back for more the next time the band hits town. And they rolled up to the Regent Theatre in Sydney to see Mother Goose's farewell performance in late May. But, as noted in last week's Gigging column, the enthusiasm for the show seemed to plummet after the first twenty minutes, because people realised that although the repertoire had changed - and numbers like In The Mood had been dropped, they'd seen the whole damn thing before — last time the Geese hit town.
Earlier this year, the Geese's manager Gary Spry spent some time O/S and negotiated a recording contract with a new company called Atlantic Scotti. When they sign the contract. Mother Goose will become the first band on the label, a side-runner to the Warner Kerb label that sports Debbie Boone and Shaun Cassidy and was set up by Tony Scotti's brother. 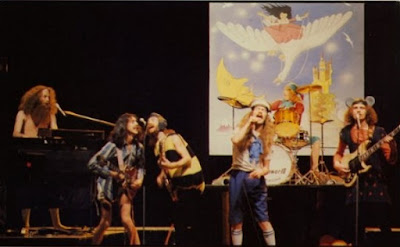 One of the first things on Mother Goose's American itinerary is a long discussion with the Atlantic Scotti execs about the problem of not-being-able-to-sell-records-because-people-are-suspicious-of-the-music-because-of-the-visuals-bla-bla. Then, Mother Goose will do some recording and release a single. After that, it's back to the studio to record an album with an American producer interspersed with a few promotional nights in Los Angeles. No doubt we'll be hearing all about that in the future.
But right now, Steve Young is looking for a slogan to sell the band. Their live performances have already sold the band in Oz, but Steve wants more than that. He wants a slogan that will capture the band in one sentence. "It's like a new brand of toothpaste," he says. "You can't just put it out and expect it to sell. You've got to sum it up in a slogan and then, when people truly believe it's a different toothpaste, even though it's the same as the others/then they'll buy it."
Obviously the slogan for their first album didn't do the trick. Mother Goose's Album is "Stuffed" So be silly and buy it.     Obviously too many punters took it seriously.
. 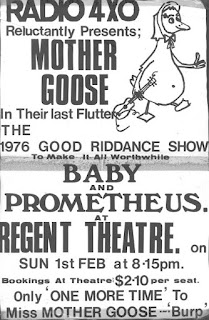 This post consists of FLACs and MP3's (320kps) ripped from my prized Vinyl copy which I purchased the first day it became available in the shops.  I had seen Mother Goose perform multiple times at La Trobe University in 1977 and immediately fell in love with their stage act and music. Even though the boys played complete fools while on stage, it was obvious from the quality of their music and overall performance that they were all highly accomplished musicians and as such, acquiring their records was a high priority.  So, in a way, I somewhat disagree with Andrew McMillian's conclusion about their poor record sales and their live shows not translating back onto vinyl. For me, hearing studio renditions of their song repertoire was icing on the cake, and would encourage anyone who hasn't heard these guys to give them a listen.
Full album artwork and label scans are included as usual, along with a copy of the RAM article and select band photos.
As a bonus, I have chosen to include a non-album single which they released not long after Stuffed was released. The B-Side "Ol' Blue" was a  regular  included in their stage act and when it finally became available on record, it was a no brainer.
.
Track Listing 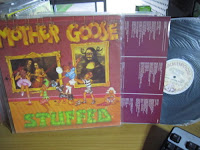 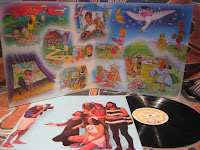