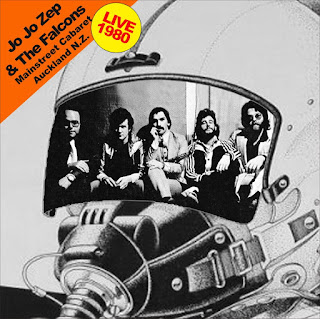 The hardest working man in Oz rock was Joe Camilleri, front man for Jo Jo Zep and The Falcons. Camilleri started with blues band King Bees while a teenager, moved to The Pelaco Bros and was a key figure in the Melbourne music scene in the '70's. He had tastes that ranged from Charles Parker through soul and reggae. His enthusiasm on stage was as boundless as his influences. Originally signed to Ross Wilson's label OZ in 1975, and then to Mushroom, The Falcons delivered inspired live performances and great records.
[Glenn A. Baker Archive]

Traveling back from touring in England, Jo Jo Zep called in at New Zealand on the 4th August, to play a one off concert at the Mainstreet Cabaret, while on their way back to Australia, finally arriving home on the 6th August. They then undertook a 7 week tour of Australia and then headed off to the States for another tour to promote their 'Hats Off Lively' album [ details from Countdown Interview with Jo Jo Zep, 3rd August London]. This post is a bootleg recording of this concert.
.
Biography
The Pelaco Brothers were the seminal Melbourne band. On their demise in 1975, they spawned Melbourne's response to the punk revolution — the frantic Joe Camilleri and the romantic Stephen Cummings (from the Sports). They helped make Melbourne the capital of Australian rock in the late '70s.
As a live act, Jo Jo Zep and the Falcons were unbeatable. Joe Camilleri, is the son of Maltese immigrants. Camilleri could barely read when he quit school as a teenage bass guitarist to play the blues in The King Bees. Camilleri quickly moved to the horn section with his saxophone which put him in great demand with a number of Carlton rock bands in the early 1970s. When The Pelaco Brothers split he formed an R&B group called 'Jo Jo Zep and the Falcons'. The songwriting was from guitarist Wayne Burt while Daddy Cool alumnus Gary Young sat behind the kit. 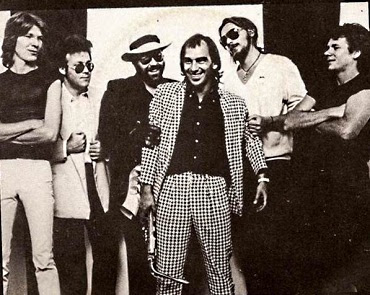 Camilleri was like a man possessed by ambition. He was always somewhat modest, possibly to the point of insecurity, about his own abilities so he drove himself right to the limit of any opportunity. His knowledge of music was exhaustive from Charlie Parker's be-bop through the entire Rolling Stones catalogue, soul, jazz or anything with a melody. He expected the same standards of his bandmates.
On stage Jo Jo Zep and the Falcons were unbeatable, largely through the efforts of the group's singer. He jumped. He pounded. He stuck his head in the bass drum. He sweated and slaved for an audience. They never worked with a set list and could just as easily venture off into a fifteen-minute monologue about the nature of love during King of Fools or quite like a twenty-minute jazz improvisation. On a good night The Falcons could stretch the set to three hours of frantic R&B, but on a bad night Camilleri could just as easily throw a tantrum and march off the stage and into the Bondi night.
Having mastered the sax he moved on to guitar, keyboards and production. From playing R&B he went to disco, jazz, zydeco, pop. 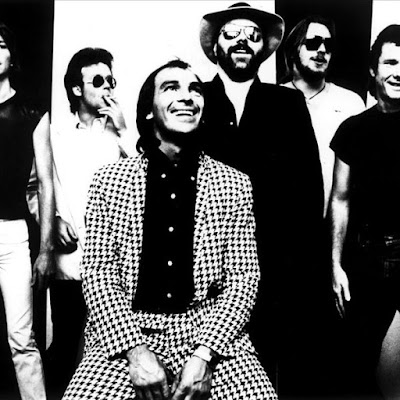 In that sense Camilleri was a quintessential Victorian. Melbourne's music culture has always been more sophisticated than elsewhere in Australia. There is a place for almost any taste and an enjoyment of music's heritage that exists in Melbourne like nowhere else.
Mostly this phenomenon is due to the efforts of David Pepperell and Keith Glass who opened and operated import stores to cater to a wide variety of tastes. Throughout the '70s, Melbourne was an eclectic town where musicians dabbled in film and theatre and supported each other's bands. Anything was available from Ross Hannaford's mystic reggae band Billy-T, art-rock from The Bleeding Hearts to the feminist agit-pop of Stiletto, whose lyrics were penned by novelist Helen Garner. In the spirit of co-operation, Joe Camilleri and Martin Armiger helped out an old Adelaide friend, Paul Kelly, with his first album, Talk.
Original Pelaco Brothers Peter Lillie and Johnny Topper kept up the kitsch side of the Pelacos' style with a series of outfits that celebrated the kitsch side of modern Australia, generally to the tune of a country guitar. The style was dubbed 'ockerbilly' and some fine records (particularly from The Autodrifters) were made.
The other pillar of the Melbourne establishment was Keith Glass' partner in the Missing Link record store, Ross Wilson. 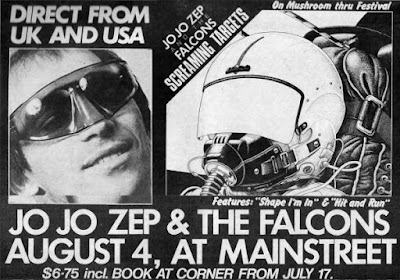 After the success of Daddy Cool and Skyhooks, Wilson was the king of Melbourne. His group Mighty Kong failed and he took a back seat from performance. EMI offered him his own record label, in partnership with Glenn Wheatley with the imaginative name of Oz Records. He signed the Falcons and produced their first album.

Their debut album 'Don't Waste It' is distinguished by the witty songwriting from Burt and the thoroughly polished performance from the band. Camilleri, however, hated the producer's studio perfectionism. He felt the record was stilted—and so did the public. The Falcons' real magic only ever came out on stage. Camilleri himself was a soulful dynamo, to match Johnny O'Keefe even, whose drive to succeed powered the group. A lack of chart success only drove him harder. Falcons' shows could be volatile, but the band meetings afterward could be far more so.
Camilleri's instincts paid off though as the group became one of the highest drawing acts of the decade on the basis of minimal airplay. [extract from The Real Thing, 1957-Now, by Toby Creswell & Martin Fabinyi, 1999. p114-116]

Despite the role call of bands Camilleri has led over the past few decades, and the rotating line-ups of each, he insists he not that restless musically.

“Not really. I think sometimes it’s pretty hard to play under the same badge, sometimes you wanna do something a little bit different. I cast a pretty wide net. I guess my interest in jazz music and free jazz, and pop music and all these things – maybe I’m a bit left of centre to a lot of people these days but I always thought it was part and parcel of what you do. Sometimes you’re playing with people who… for instance in Jo Jo Zep & The Falcons, I didn’t realise how good they were until recently. I always liked playing in that band, but they didn’t wanna go anywhere, they just wanted to play R&B music, and the only reason they had a few hits was ‘cos I wrote a few songs that were a bit different, with the reggae stuff and so on.

“But they didn’t really want to go there, I just dragged them there, and you can only drag people for so long before you say ‘look, I’m happy for the hits and all that, but I have to cut myself loose ‘cos it’s not really what I signed up for, you know.’
[Extract from Interview with Shane Pinnegar from the 100% Rock Magazine, 2013]
.
This post consists of MP3's (320kps) taken from a taped radio broadcast of this one off concert at the Mainstreet Cabaret in New Zealand, on the 4th August 1980. Album artwork is provided, thanks to the artistic talents of WoodNet at Midoztouch2 (cheers Woody).  This is a great concert capturing the band firing on all barrels and features a full anthology of all their early hits and excellent sound quality. This is one bootleg not to be missed. 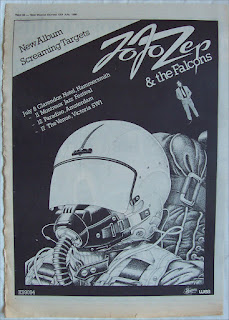 Posted by AussieRock at 8:50 PM