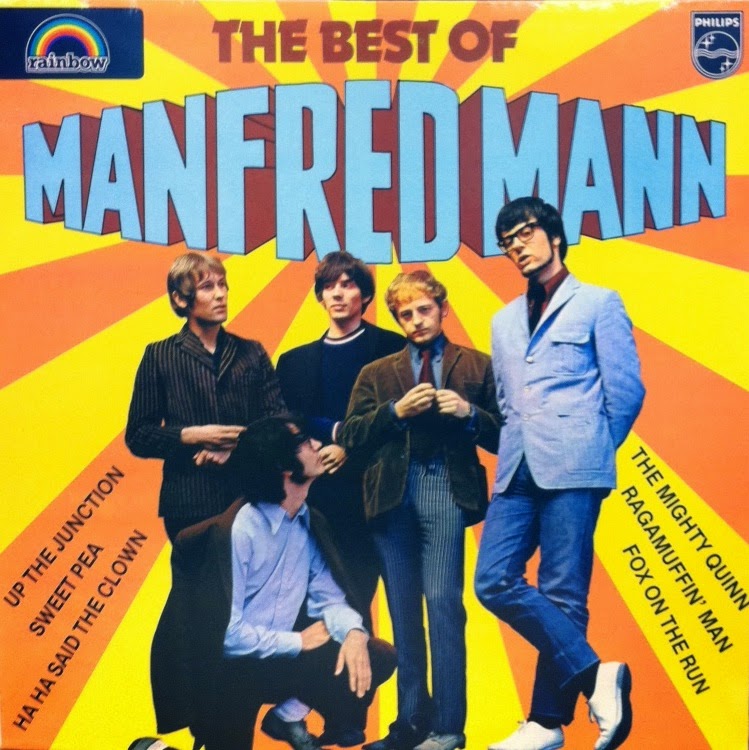 Manfred Mann was originally formed by Mann (b. Mike Lubowitz in Johannesburg, South Africa, Oct 21, 1940) and Mike Hugg (b. Andover, Hampshire, Aug 11, 1942) as a jazz-band called the Mann-Hugg Blues Brothers; in 1964 they started playing R&B, and consolidated themselves into a five-piece with the line-up as above though Dave Richmond was the group's original bassist. Jones (whose real name was Paul Pond) was still an undergraduate at Oxford University.

They signed to HMV and released an unsuccessful, but promising, instrumental called "Why Should We Not?", and then found their style with a fast-moving "Cock-A-Hoop". However, it was not until their third single "5-4-3-2-1", with Jones' harmonica-playing prominently featured, that the band established themselves as a chart act. 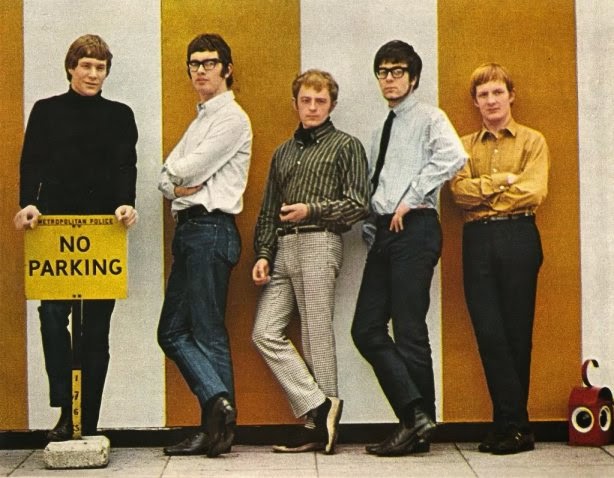 "5-4-3-2-1", which reached No. 5 in the U.K. charts in February 1964, was undoubtedly assisted by the fact that it was used as the theme tune to the TV programme, "Ready Steady Go", until it was replaced by the Manfreds' follow-up, "Hubble Bubble (Toil And Trouble)", also a major hit. Manfred Mann had 15 hits in the next few years (although Hubble Bubble was the group's last self-penned single), with what was often just high-class pop material, while they tried to show their more substantial skills on albums like- their blues-oriented, debut Five Faces Of Manfred Mann.
Their hits included "Doo Wah Diddy Diddy" (1964), which reached No. 1 on both sides of the Atlantic, despite the fact that it was a cover of a record by The Exciters, "Come Tomorrow". "Oh No Not My Baby" (both 1965) and "Pretty Flamingo" (1966). 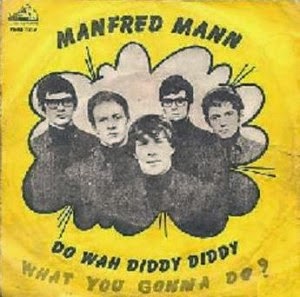 They also recorded a very popular EP which included Paul Jones' composition about the band (and himself) "The One In The Middle", and also Dylan's "With God On Our Side". Meanwhile, Vickers left to pursue some solo projects, and McGuinness moved over to lead guitar, with Jack Bruce (*) coming in on bass.
Within six months, Bruce had left to join Cream, and Paul Jones had similarly opted for a solo career (he had two hits, "High Time" and "I've Been A Bad Bad Boy", the theme-tune from "Privilege", a movie in which he starred); their replacements were Klaus Voorman and Mike D'Abo from a Band of Angels respectively.
The band signed to Fontana label, and resumed their chart success with "Semi-Detached Suburban Mr James", "Ha! Ha! Said The Clown" and "My Name Is Jack". 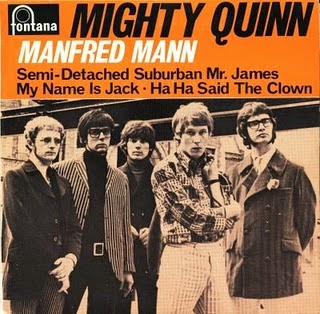 The outfit always made capital out of covering Dylan songs, "With God On Our Side", "If You Gotta Go, Go Now", and later Just Like A Woman and "The Mighty Quinn", which provided the band with their third British No. 1 in February 1968. Dylan himself was quoted as saying that he thought Manfred Mann came up with the best cover versions of his material.
Meanwhile, Manfred Mann were becoming increasingly jaded with what seemed the demeaning process of merely following hit single with hit single, and many members, like Vickers, had absorbed themselves in "heavier" pursuits - Hugg, for example, had written the score for "Up The Junction".
So in 1969, Mann broke up the band and he and Hugg formed the more ambitious Manfred Mann Chapter Three with a full brass section; although their debut album included a fine version of a Hugg song, Shapes Of Things, that had been a 1966 hit for The Yardbirds, Manfred Mann did not find true happiness and artistic credibility in an albums-oriented band, and Chapter Three was dissolved in 1971, only for Mann to try again with Manfred Mann's Earth Band.
. 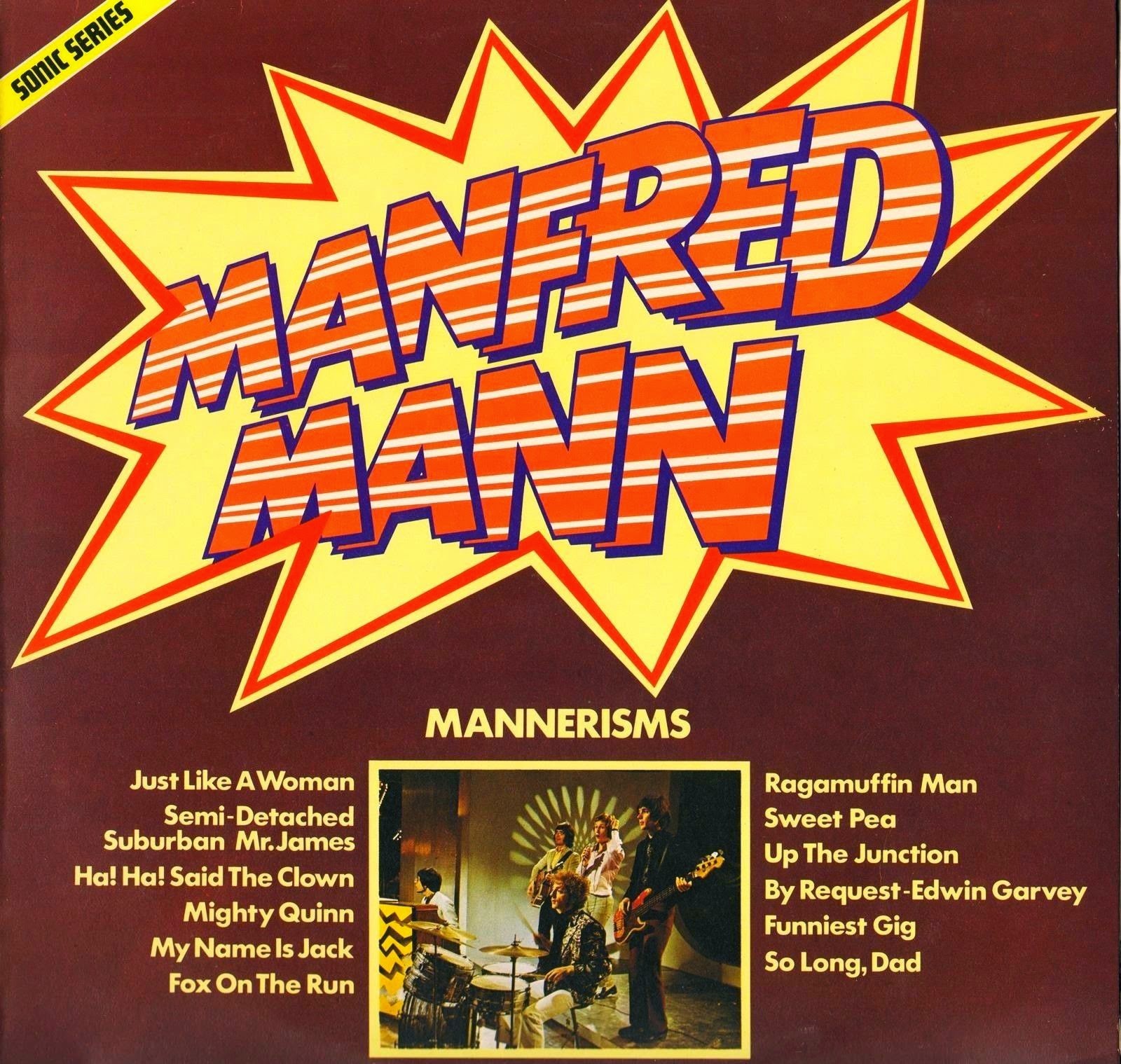 This post consists of MP3 (320kps) ripped from my pristine vinyl copy which I picked up for a song (pun intended) at me local flee market last week. Although this pressing was released on Phillip's Australian budget label 'Rainbow' the quality of the recording isn't too bad. Some bass enhancement was added to enhance the sound, but overkill was avoided to retain the authentic sounds of the 60's.
As a side note, I'm somewhat intrigued by the intro to "Trouble and Tea" which sounds so much like the Beatles 'Day Tripper'  it's a wonder Manfred Mann weren't sued for breach of copyright. Have a listen and see what you think. Even though the tracks on this compilation were recorded when Manfred Mann were signed to the Fontana label, I'm also including as bonus tracks their two singles "Pretty Flamingo" and "DoWah Diddy Diddy" which were released earlier by HMV, to make this collection complete. This compilation has also been released under other titles such as 'Mannerisms' and 'Attention! Manfred Mann'
.
Track Listing
01. The Mighty Quinn
02. Ha Ha Said The Clown
03. Up The Junction
04. Just Like A Woman
05. Semi-Detached, Suburban Mr. James
06. Fox On The Run
07. My Name Is Jack
08. Ragamuffin Man
09. Sweet Pea
10. So Long, Dad 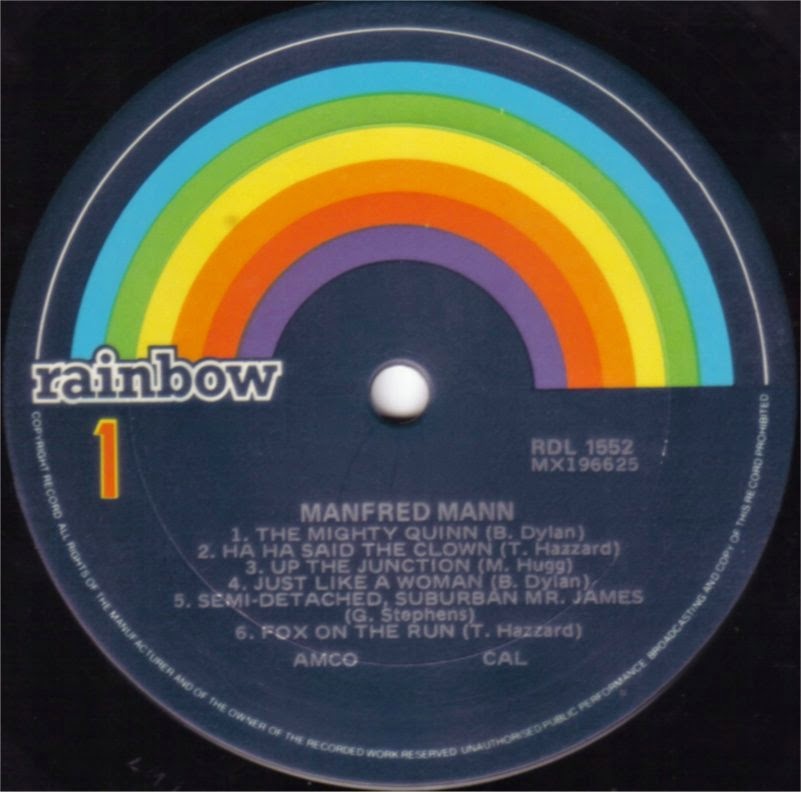