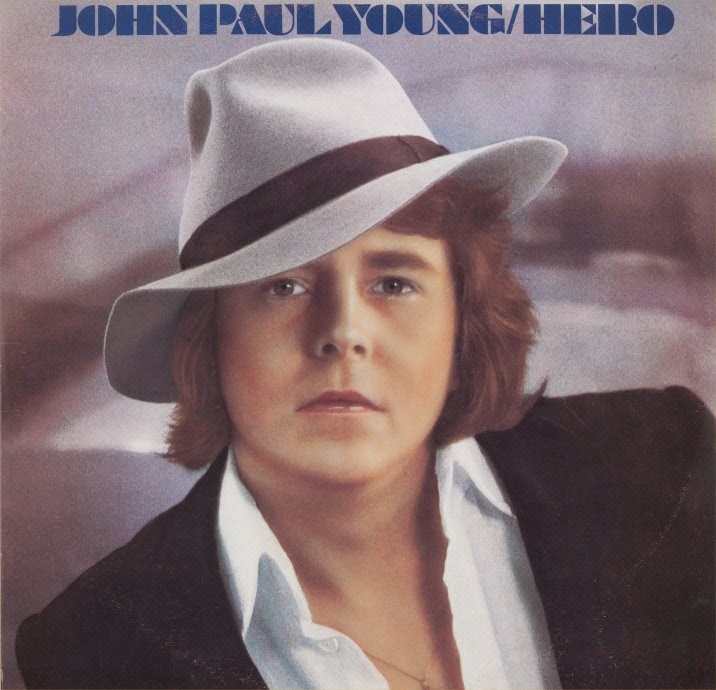 John was born in Glasgow, Scotland on June 21, 1950 and he migrated to Australia with his parents in 1966. His early musical experience involved learning to play the piano accordion.
When he left school he took on an apprenticeship as a sheet metal worker and he began singing with a band called 'Elm Tree'. The group's one and only single was "Rainbow"/"Lonely Nights", which was released late in 1970 and was basically a flop. Following the band's break up John joined the cast of Jesus Christ Superstar, playing the part of Annas. Around the same time he was spotted by producer Simon Napier-Bell, who was looking for a singer to record Vanda and Young's "Pasadena". John recorded the number and it became his first hit in April, 1972.
He stayed with Superstar for a period of two years and in the meantime two more singles were released — "You Drive Me Crazy"/ "Better Go Back To Bed" and "Bad Trip"/"It's Only Love". Both were unsuccessful and it wasn't until April, 1975 that he re-entered the charts with another Vanda and Young composition, 'Yesterday's Hero'. J.P.Y.'s single "Yesterday's Hero", was released in March 1975, and was a song about the fleeting nature of pop stardom which clearly drew on Harry Vanda & George Young's own experiences as members of 'The Easybeats'. The record made the national charts and soared to number one. A key factor to Yesterday's Hero success was the film clip made to promote it, which enabled the song to be given exposure on Countdown (following the official start of colour TV broadcasting March 1, 1975. 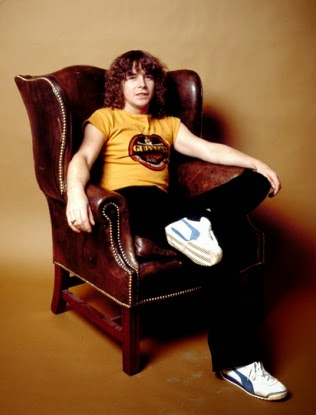 His Best Of album 'Hero'  reached #20 on the charts in November 1975 and became a gold record. In addition, it sold well in the US and apparently reached the number forty-two position on the Cashbox top one hundred, which is quite an achievement. In fact-critics claimed at the time that John should have gone to the States and promoted the record, which perhaps would have caused it to be an even bigger hit there. However, he felt it was too early in his career to leave Australia and decided to stay here and consolidate himself. In the interim, "Yesterday's Hero" was covered by the Bay City Rollers. In October 75, he released his debut album, 'Hero', which was dominated by Vanda and Young compositions.
At this point John adopted his full name of John Paul Young in order to avoid confusion with established pop star Johnny Young. He also formed his own band, the All Stars, which included Warren Morgan, Johnny Dick, Ian Winter, Ronnie Peel and Ray Goodwin. John's next single, "The Love Game", was released in August, 1975 and during the year he completed two national tours (one with Sherbet).
Another single, "I Hate The Music", was issued in March, 1976 and it was also released in the US. The record became his first gold disc and later in the year he released his second album, 'JPY', which like Hero achieved platinum status. Also in 1976 John -was voted the Most Popular Male Performer in the National Music Industry Awards and in September he scored another hit with "Keep On Smilin". 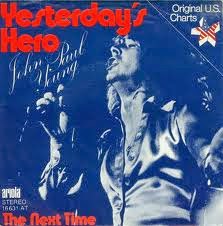 In February, 1977 Ian left the All Stars and the gap was filled by Dallas McDermit That same month John scored his sixth hit with "I Wanna Do It With You" and in March his third album, 'Green', was released. It consisted of good basic pop in a similar vein to his earlier albums, although it did feature some songs written by John and Warren Morgan.
April, May and June were spent on the road and midway through the Australia-wide tour a new single, "Here We Go", was released. Meanwhile things had started to happen for John overseas. In Germany a track from the Green album, "Standing In The Rain", made the charts and eventually reached the number six position. As a result John left for a promotional tour of Germany and Holland in August.
However, it was South Africa where he was most popular, with four singles making the top ten — "Yesterday's Hero", "Keep On Smilin", "I Hate The Music" and "I Wanna Do It With You" - so in September John left with the All Stars (featuring new guitarist lan Miller) for an extensive tour of South Africa. The trip was immensely successful, with scenes of hysteria unequaled even in Australia, and John stayed on an extra four weeks.
They returned to Australia in December to find that their most recent local single, "Where The Action Is", was suffering from a lack of airplay and had not made the national charts.
John and the boys rounded off 1977 with a tour of the capital cities and by then the Green album had been declared gold. His plans for 1978 included a return to Germany and Holland late in January where his new single there, "Love Is In The Air", had reached the top twenty. In Australia "Standing In The Rain" was released in January, and in March John intended recording a new album.
[extract from Noel McGrath's 'Australian Encyclopedia of Rock' 1978, p 344-346]
.
Album Review 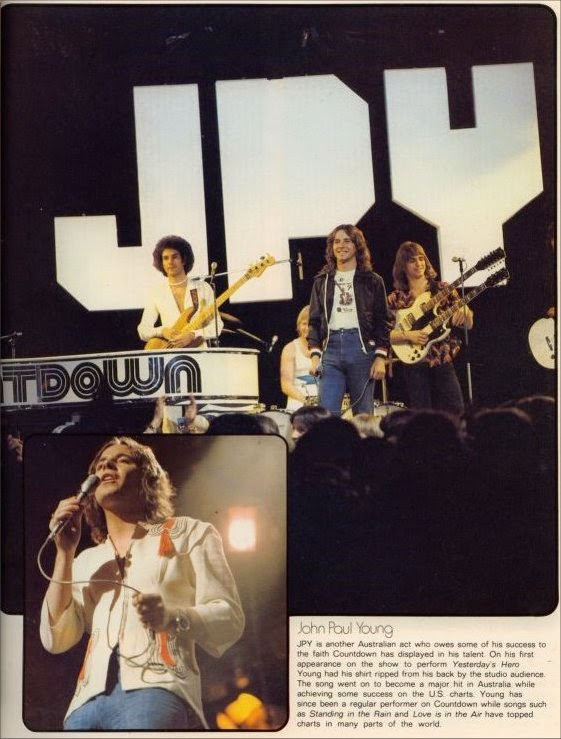 (By Mike Guthrie, RAM Magazine Dec 5, 1975 p24. #20)
Whadis? Already a Best Of collection for John Paul? I mean, the kid's career is just starting and here we have an elpee of past single tracks with a few rough-edged ballads thrown in to weigh down the mixture.
Well, it was put together in a hurry, I 'spose. Had to get that album out while the kid was hot.
'Spose also that "Yesterday's Hero", "The Love Game" and previous minor hit "Pasadena" had to go on. Even though "Hero" and "Love Game" are already in many collections as singles. 'Spose it was also worth resurrecting the previous non-hit, "Bad Trip". Radio wouldn't play it back in '74, 'cos radio figured it referred to drugs. (It's about suicide actually.)
Lemme see now. There's also the old Easybeats song, "St.Louis". It's a good feature of J.P's stage act and the re-record is a nice re-spray job at that.
Getting onto the newly recorded stuff, there's "Friends", a well-structured, full-of-effects pop epic of paranoia, and there's the Motownish "The Next Time". There's the sing-along gallows humour of "Birmingham". There's a ballad "Silver Shoes And Strawberry Wine" that comes from an album the producers/writers Vanda and Young themselves made some years ago. There's another ballad "Things To Do". In both these instances John P. sings with his usual gruff distinctive sweetness and the production (seemingly intentionally) is rough-edged and sparse. This leaves mucho room for Mr. Young's voice - but doesn't give him much of a backdrop to use it against.
It's by no means a bummer album. There is a certain ambiance of teenage tragedy to most of the lyrics but much of it has a compulsive listenability. It's well-packaged, mainstream, commercial - pop. Does it really matter if 4 of the 10 tracks have been heard time and time again before on radio?  I think not. Mike Guthrie
. 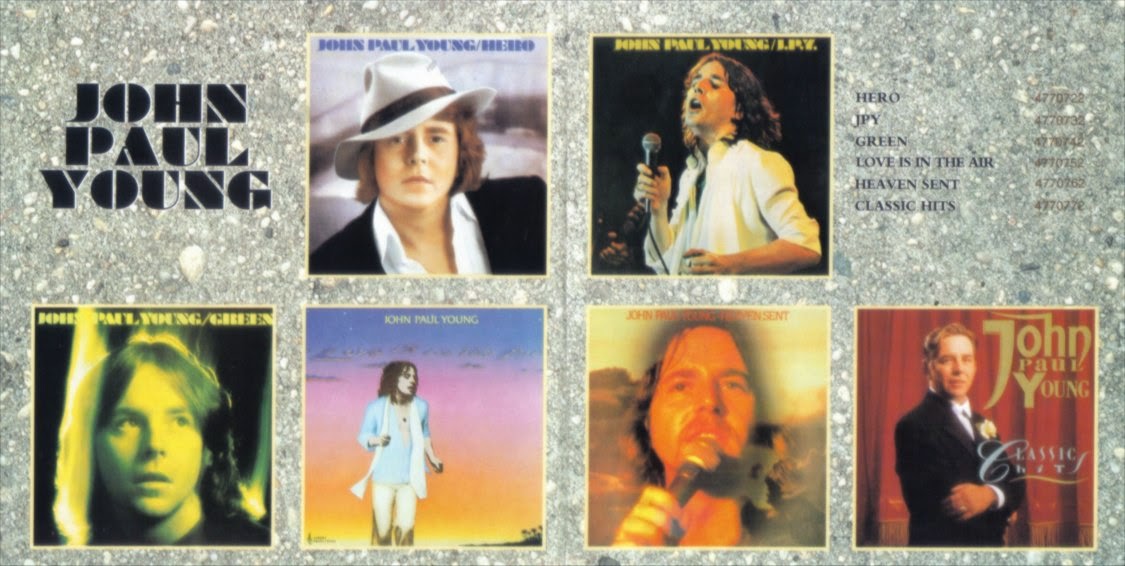 .
This post consists of an MP3 Rip (320kps) taken from Cd and includes full album artwork for both LP and CD.  As a bonus, I'm also including the B-Side single "You Drive Me Crazy" which did not appear on any album but is quite decent for a B side. Although "Squeak" wasn't really my cup of tea when I was an adolescent young boy going through my teens, I still enjoyed hearing his #1 Hits when they hit the radio - particularly "Yesterday's Hero" and "The Love Game".  But shhhh - don't tell anyone !
. 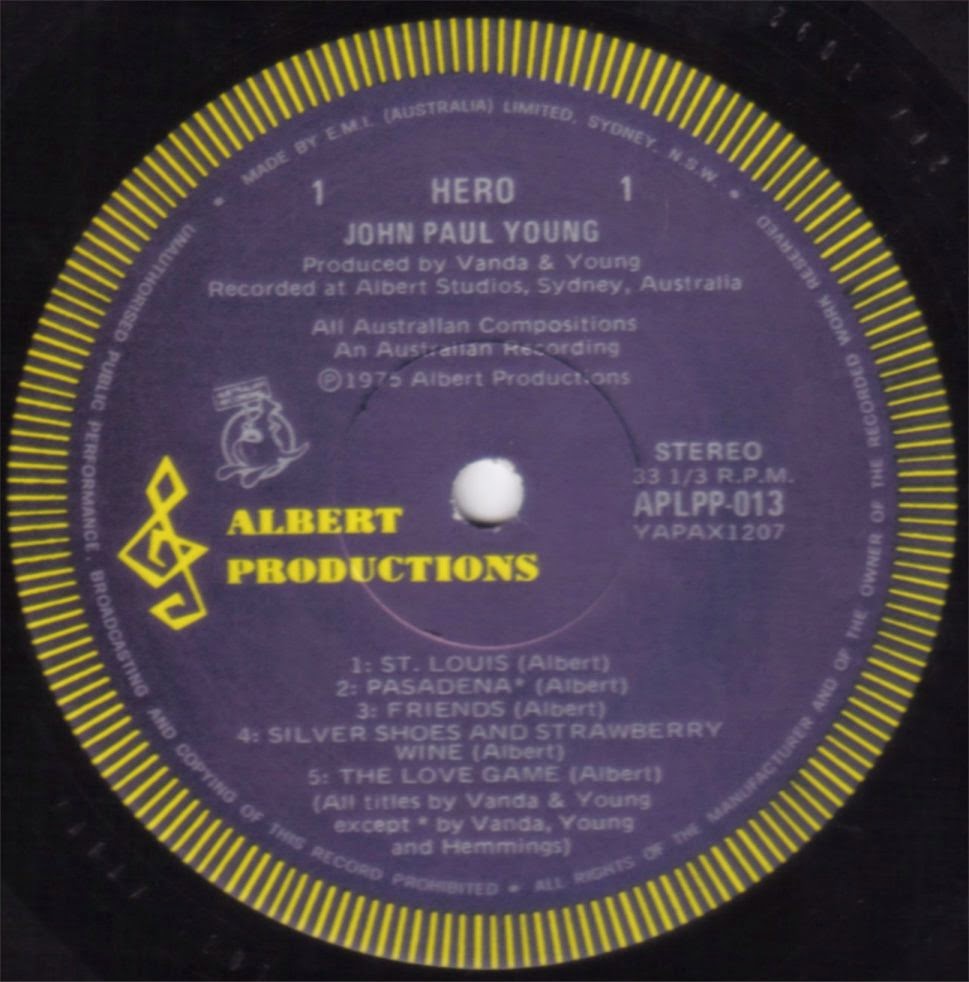 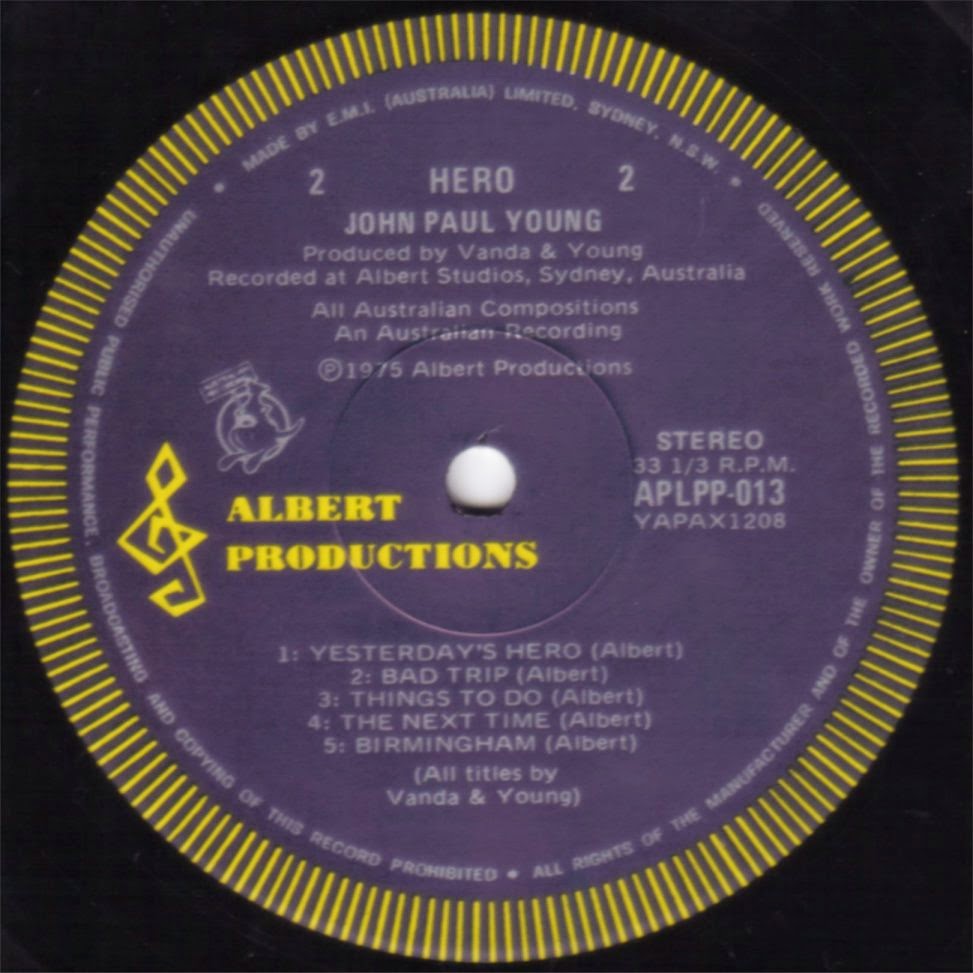