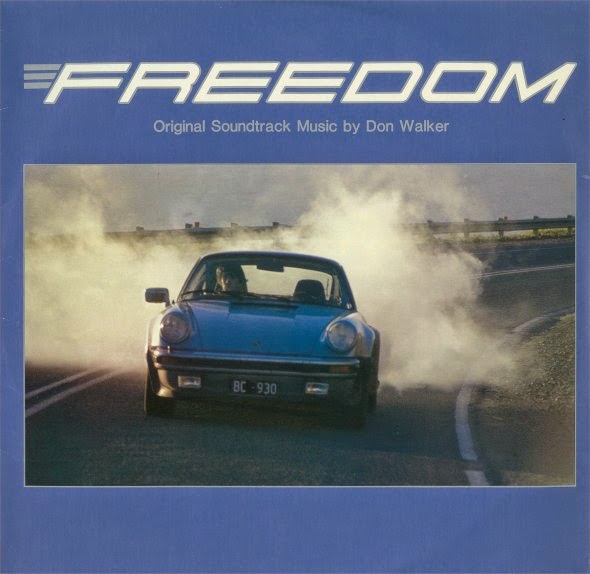 Freedom is a 1982 film directed by Scott Hicks. The movie was shot in May to June 1981 in and around Adelaide.  The story line goes something like this: A disillusioned youth, obsessed by fantasies of material wealth, steals a Porsche and with his girlfriend in tow, leads the authorities on a cross-country chase. A local entry into the 'road movie' genre, with excellent stunt work, high-speed chases and an atmospheric soundtrack, which is the focus of this post today.

Don Walker composed the music for this film about a man's love for his Porsche. First released on vinyl in 1982, it was re-released in 1996 as a CD sporting a different cover design. It features musicians from Cold Chisel and INXS along with guest vocalists - Liz Watters and Jason Currie. A single was also released in 1982.  "Speed Kills" / "Fascist Sounds" (WEA  100201). 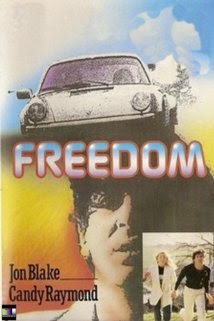 Don Walker (born 29 November 1951) is an Australian musician and songwriter best known for writing many of the hits for Australian pub rock band Cold Chisel. He played piano and keyboard with the band from 1973 to 1983, when they disbanded. As a member of and main songwriter for Cold Chisel between 1973 and 1983 he wrote “Saturday Night”, “Cheap Wine”, “Standing on the Outside”, “Four Walls”, “Khe Sahn” along with many others, and co-wrote “Flame Trees”. He also wrote and produced the soundtrack for the Scott Hicks movie “Freedom” in 1981, featuring most of Cold Chisel and then unknown INXS singer Michael Hutchence. In 1989, after a break from music spent traveling, he released “Unlimited Address”, a set of songs under the band name Catfish, recorded with producer/guitar player Peter Walker and harmonica player David Blight. As a touring band Catfish also included guitar player Charlie Owen. In 1991 the second Catfish album, “Ruby”, was released, recorded with James Brown’s rhythm section of drummer Tony Cook and guitar player Ron Laster. The songs were more Australian in content. Slim Dusty had a hit with his version of “Charleville”, which he then invited Don to re-record as a duet.

He has since continued to record and tour, both solo and with Tex, Don and Charlie, and worked as a song-writer for others. In 2009, he released his first book “Shots”, published by Black Inc. I purchased a copy of this book recently, and am sorry to report that he probably should stick to writing songs (I found the book almost impossible to read - not my cup of tea I'm afraid). 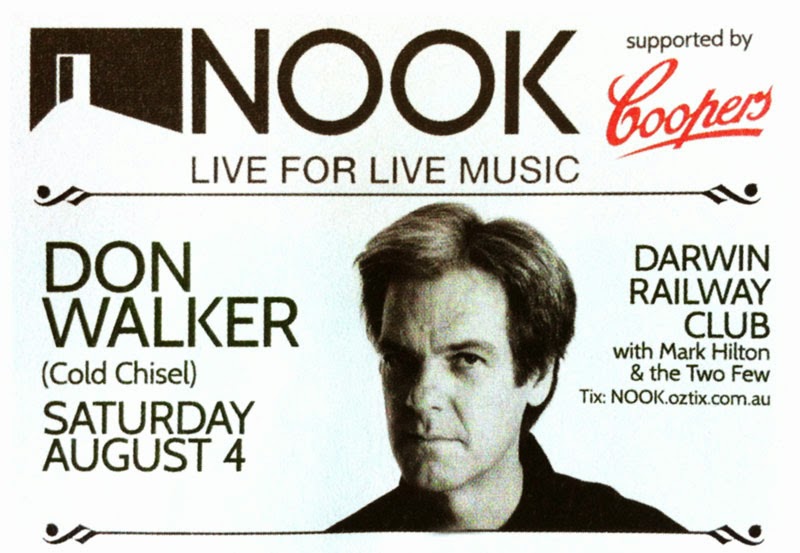 Richard Clapton describes Walker as, "the most articulate Australian song writer there has ever been. Don just digs being a sort of Beat poet, who goes around observing, especially around the streets of Kings Cross. He soaks it up like a sponge and articulates it so well. Quite frankly, I think he's better than the rest of us."

Walker is considered to be one of Australia's best songwriters. In 2012 he was inducted into the Australian Songwriter's Hall of Fame.
.
Interview with Scott Hicks (Film Director)
(5th August 1996, 7th September 1996)
by Peter Malone

Q. Retracing your film journey from Freedom to Shine, what are your memories of Freedom?

Freedom was a very mixed experience. On the one hand, it was heady and exciting and intoxicating to be making your first feature film but, on the other, there were difficulties in the way the production was organised. The writer, John Emery, and I were kept separate from each other. In retrospect this was a huge blunder because the film was never totally focused in its vision, and I think that's reflected a little in the sort of schizophrenic nature of the film.
.

Of course, it received very mixed reviews and it didn't do much at the box office. But there were elements about it of which I'm still extremely proud. And then there are things which, if we had worked this material better as writer and director together, we could have done something more substantial. So it was a mixed experience and a little scarifying in the end that it didn't work. And, you know, the director really cops it for good or ill.

Q. You mentioned the word `vision'. What was your vision of the film and what themes did you want to explore in the early '80s?

It's such a long time ago now. I think at the heart of it there was a character that I liked and that I recognised, someone with enormous frustration - not unintelligent, but obsessed with cars and in some ways constrained by the unemployment experience that was so rife then and indeed is, of course, now. So it was about someone trying to break free and trying to define himself. It had shades of Walter Mitty about it as well.

I used the word `schizophrenic' before. Freedom was a story that fell into two parts: one was about the whole environment, the whole milieu that Ron had grown up in; the second was about his hitting the road. When he tried to realise his dream, stole the Porsche, found the girl and did hit the road, it became another movie and I don't think those two elements were ever fully reconciled. So you had some people who loved the first half and hated the second and vice versa. When you have that happening with an audience, it's hard for it to jell.

This may be irrelevant, but I was looking for locations for Sebastian and the Sparrow; I drove across the Nullarbor and I stopped at various petrol stations along the way, and twice people said to me as they were pumping petrol into the car, `So, what are you doing?' I said, `I'm looking for locations for a film'. `What have you made before?' `I made this film called 'Freedom.' `Oh, my favourite film!' So there were people out there who really got something from it but, in broad terms, it simply didn't work. Sometimes that happens.
[extract from interviews conducted by Peter Malone]
.

This post consists of an MP3 rip (320kps) taken from my crispy clean, almost 'virgin mint' vinyl copy that I bought when the LP was first released, purely based on the Cold Chisel connection. Copies on eBay have fetched up to $200, so I think I might hold onto this little gem for just a little longer.
Full album artwork  for both LP & CD plus label scans are included, but no Porsche I'm afraid.
Overall the music on this album is pretty damn good for a Soundtrack and there are some killer tracks: namely the single "Speed Kills" on side A and the lengthy "Eleuptheria" opener on Side B.
Even if you're not a Cold Chisel / INXS fan, and you haven't heard this album before, you should do yourself a favour and grab a copy now.
. 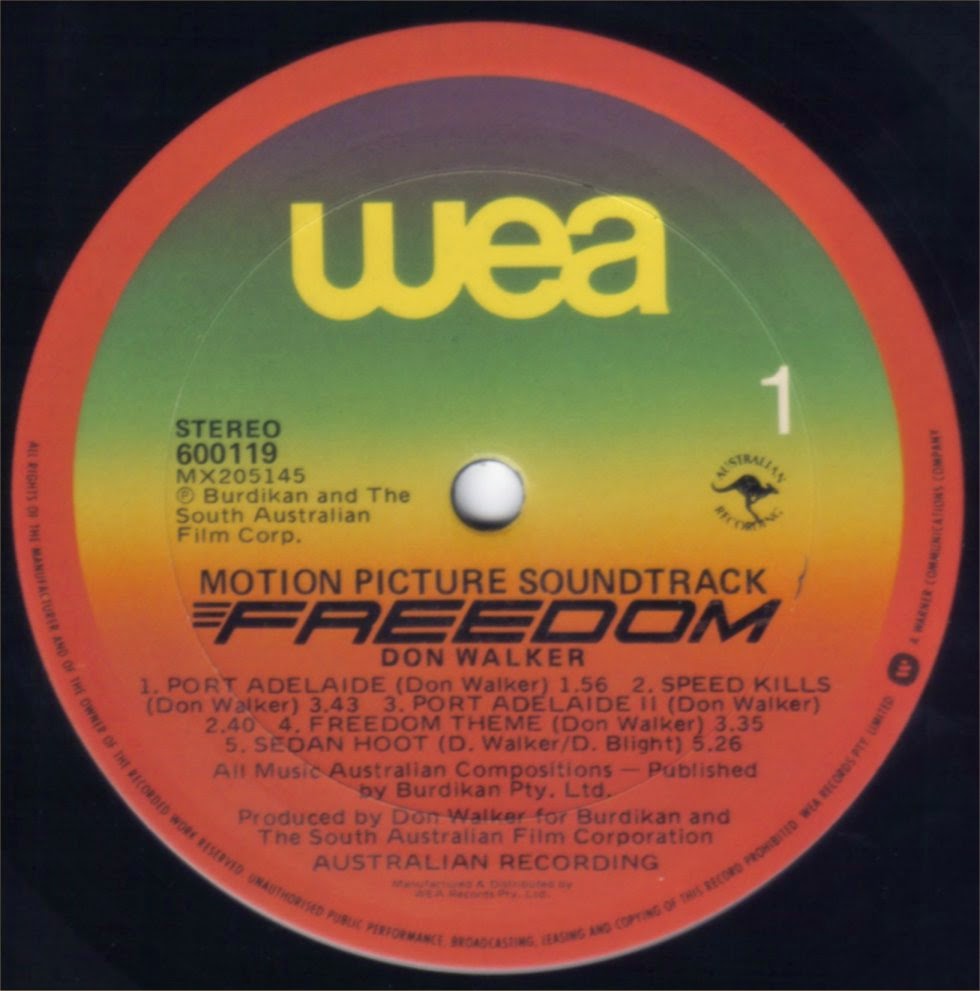 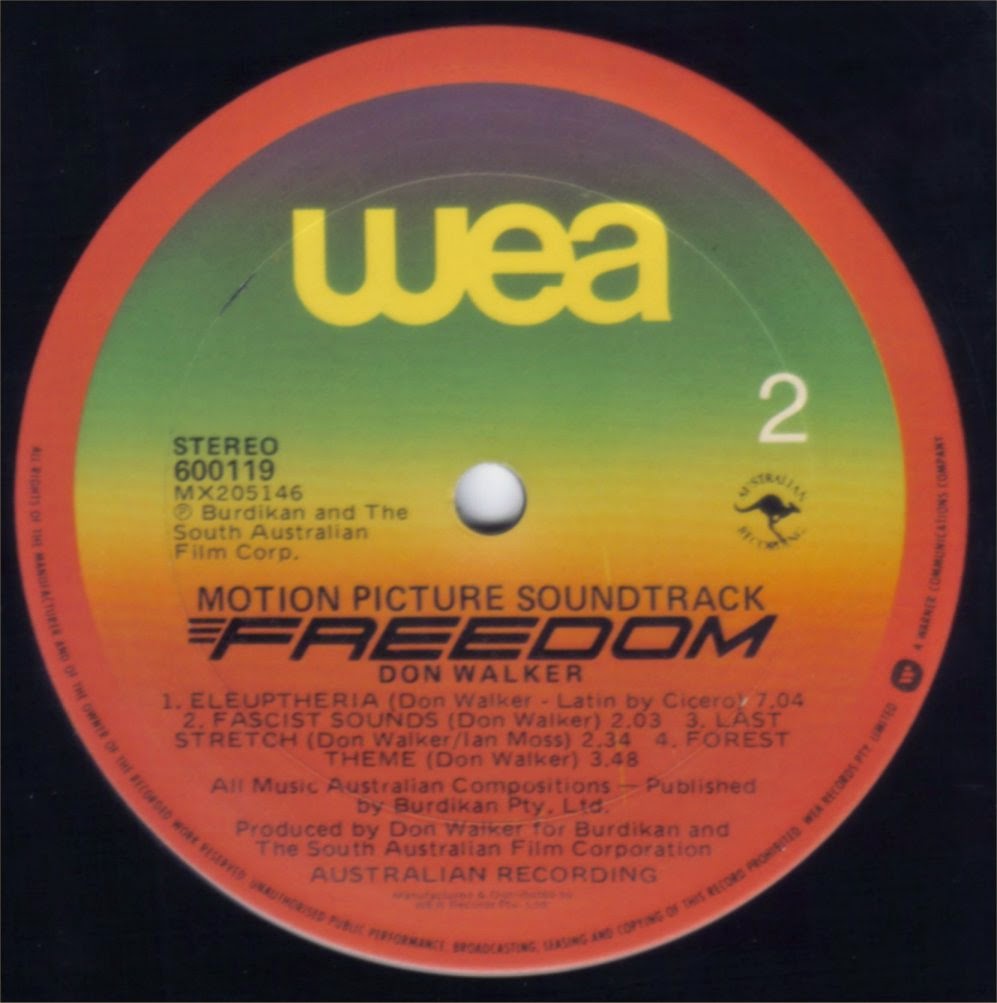