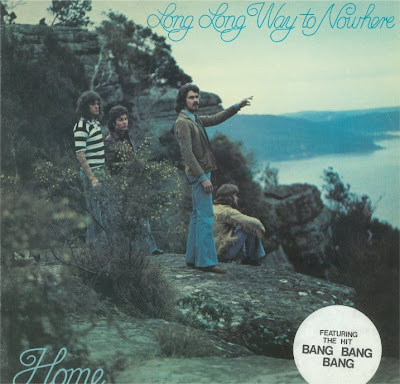 This album is one of the undiscovered gems of the 70's in my opinion.
Led by Glyn Mason following his departure from the famous Melbourne group Chain (and a short stint as leader of Copperwine when Jeff St. John left), this is what might be best described as country rock with some progressive elements. Mason went on to play with many other great Australian bands like Ariel, Richard Clapton and 'Stockley, See and Mason'.
Home had a connection to a variety of Oz and New Zealand Bands. The group members had been in several bands before producing their album 'Long Long Way To Nowhere' which featured the single “Bang, Bang, Bang”.
Mason's vocals sound very similar to Brian Cadd and Bob Dylan at times. Home played a sophisticated form of country rock, not dissimilar to the bands such as the Dingoes or early Little River Band or even the Savannah Silver Band.
The 4 minute single “Bang, Bang, Bang” is an edited version of the album release which is nearly 7 mins long and has the 3rd verse and other sections edited out.
Home released one other album in 1973, called 'At Last!' featuring a different bass player - Trevor Wilson and Mal Logan on keyboards. 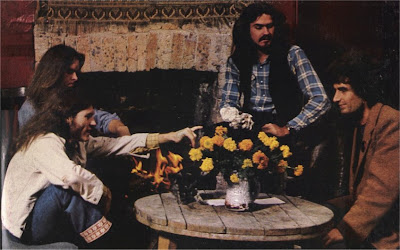 Phil Lawson originally played bass for SCRA and then Bakery (1973) and then finally took over from Trevor Wilson to play bass for Home in 1974. He eventually joined Richard Clapton in 1975 for a short stint with Sloppy Morris (on Blue Bay Blues) and eventually went on to play with Max Merrit & The Meteors in 1980.
Nevin 'Loppy' Morris played drums for Hot Cottage in 1970-71 and Richard Clapton in 1975 (playing drums on "Girls On The Avenue") before joining Home,and then went on to play drums for the Deltoids (blues and rockabilly) in early 80's.
Ian 'Gunther' Gorman has been in many Australian bands - almost a Who's Who's of Aussie Rock. His first band was Reeb Revol in 1969 (consisting of Graham Patrick, Paul Reynolds, Digger Royal, Ron Shepherd, Peter Smith). He then joined Salty Dog in 1972 and eventually left to play with Australian icons Daddy Cool.
In January 1975, Daddy Cool appeared at the final Sunbury Festival, after which (Ian) Gunther Gorman was recruited to bolster the group's lineup, and although it was clear by this time that Daddy Cool was well and truly past its use-by date, they soldiered on for a few more months. He was eventually replaced by Wayne Burt before Daddy Cool called it quits.
Gunther Gorman played guitar on Goodbye Tiger for Clapton in 1976 and also filled in for Sherbet when Clive 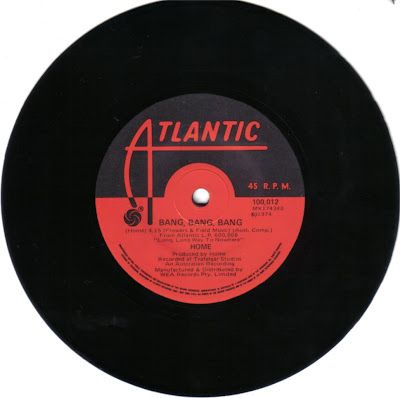 Shakespeare left the band but was eventually replaced by Harvey James.
He then formed the Gunther's G-Force in 1978-1979 with Don Miller-Robinson, and then joined forces with the 'The Fives' in 1982 alongside Frankie J. Holden, Rockpile Jones, Jim Manzie, Geoff Plummer and Wilbur Wilde.
For more info and a link to Gorman's one and only solo album, see Ozzie Music Man's website
.
There's not one bad track on this album, the music is very laid back and really easy to listen to. It is almost mesmorizing at times with most tracks running between 5 to 10 minutes long - my favourite is Mr. Blue. All tracks are Australian compositions written by the band and the strong vocal harmonies of Mason and Lawson along with the technically perfect guitar work by Gorman make this album a true 'lost classic' from the 70's.
.
This post consists of a 320kps rip of my 'near pristine' vinyl and includes full album artwork. I have also chosen to include the single version of "Bang, Bang, Bang" so you can compare it with the album version. Enjoy !
.
Track Listing 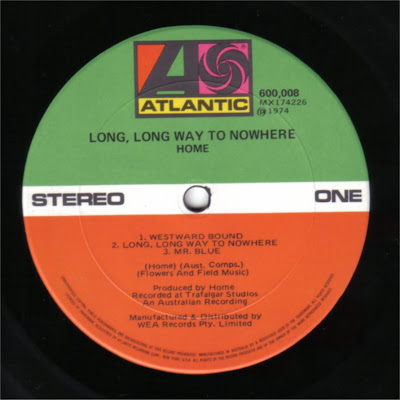