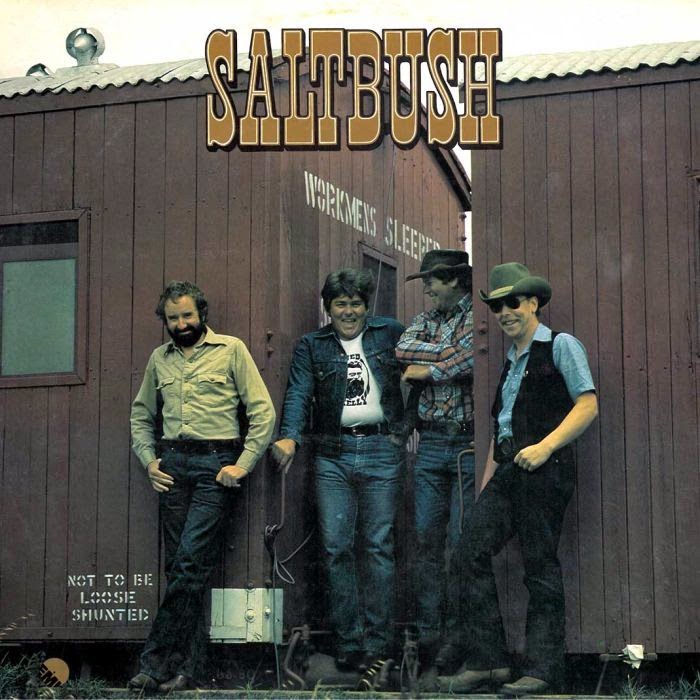 Melbourne country group 'The Promised Band' recorded a single "Got To Get Back To Tamworth".
This band then morphed into Saltbush with Bernie O'Brien, Paul Pyle and Ross Nicholson in 1975, touring Australia and supporting Ray Stevens who was also touring at that time. Saltbush eventually gained recognition in 1977 by winning the Best New Talent Award at the Tamworth Country Music Awards, and also played at the Tulsa Festival in Oklahoma, US in the same year. They also received an award in 1979 for their single "Stranger / Fiddler Man" taken from their Selftitled album.
Their music style was a mixture of Country, Folk and Bluegrass. They were also great ballad singers and successfully toured for a year with the Slim Dusty Show in 1977. 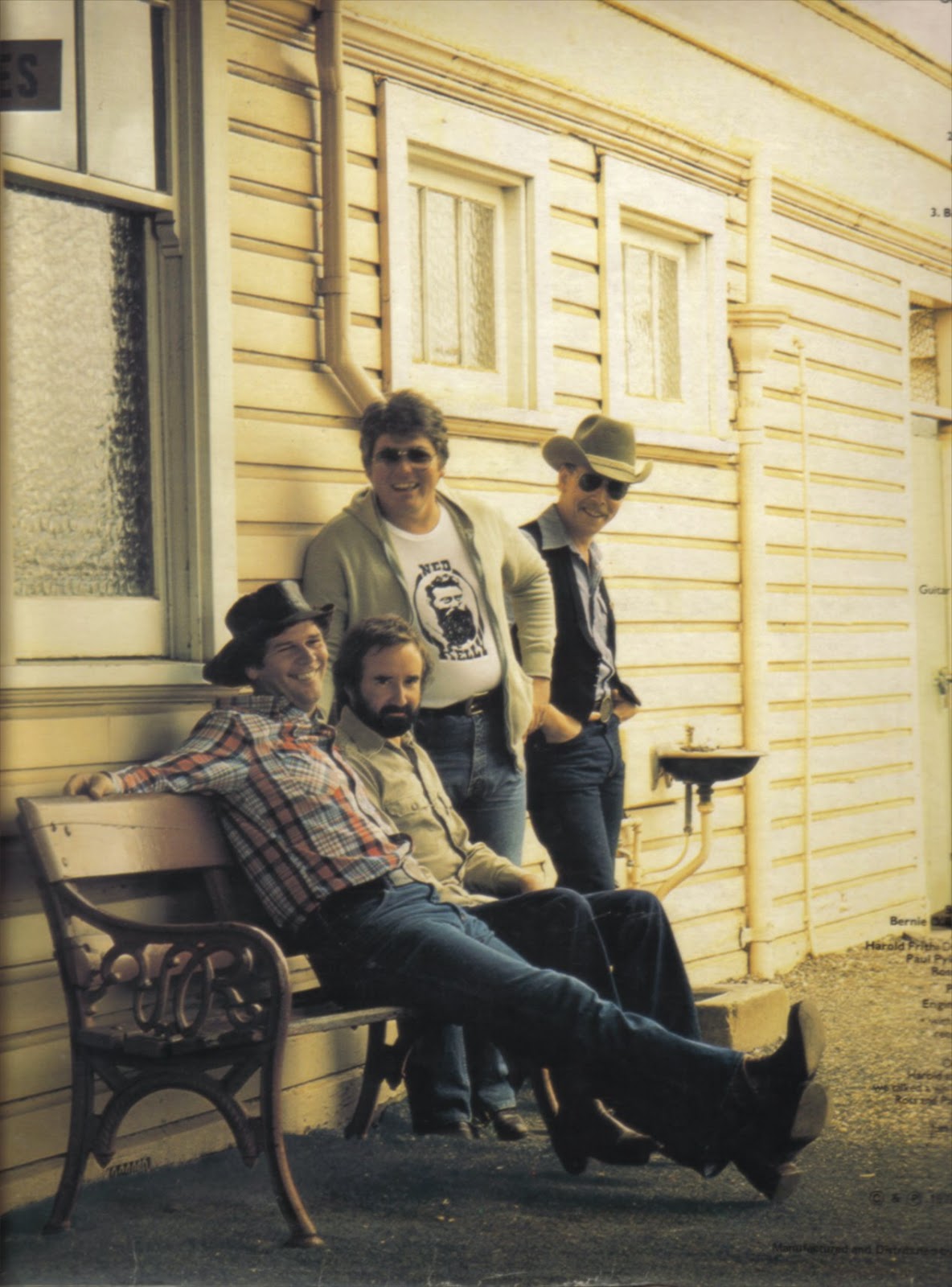 Saltbush released two quite successful albums: At Twin Rivers (1976) and Saltbush (1978), before disbanding as a group in 1979 and seeking solo careers.
Some of the members were Bernie O'Brien (one time member of The Rondells), Paul Pyle and Ross Nicholson and Mark Moffatt who both played on and produced their albums. There are a couple of Saltbush tracks on the 'Live at the Station' album released in 1976, an album which I plan to post in the near future, so stay tuned.
Record producer Mark Moffatt has been sharpening his studio skills for over 30 years. He grew up playing music in Bundaberg and then Brisbane in a string of bands including Iron Web, Spike and Stop Press. He later travelled to the UK where he worked on Denmark Street meeting some of the most famous musicians and producers of the day including Jimmy Page, Terry Britten and Eric Stewart of 10CC. 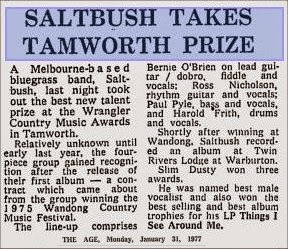 Returning to Australia in the mid 70s he began working at the Bruce Window Studios in Brisbane where they had a state of the art 16-track studio in the West End. The first band Mark Moffatt produced after the famous Saints single were Melbourne country outfit Saltbush. He later joined the band playing mandolin and lap steel on this LP and touring the U.S.
In a pocast with Mark (thanks to Jordie and David Kilby) he states that the band had a relatively strong following around Melbourne with over 200 people regularly attending their gigs - mostly to hear them argue on stage. They were a pretty rough and ready band but were also very good musicians and Slim Dusty was a big fan. They definately liked their drink! [extract from soundcloud.com]
. 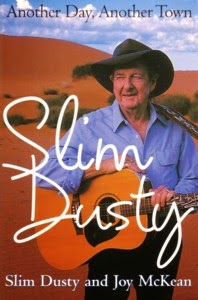 Slim Dusty recalls in his book 'Another Day, Another Town'.......
I spent 1977 touring, because I had two albums still in the can by the end of 1976, "Give Me the Road", a truck album, was released in October 1976, but "Just Slim" and "On the Move" were to fill my recording commitment for 1977. So I appeared in all the mainland capitals, toured Queensland, Victoria! New South Wales and went down to Tasmania to complete the year.
At the Tamworth Awards in January, a Melbourne band called 'Saltbush' won Best New Talent, and I was very impressed with their raw, driving sound. I liked the songs their guitarist, Bernie Q'Brien, wrote for them as welL They stirred up the establishment at Tamworth a bit, and when they turned up again at the 1978 Awards there was so much clucking over their doings that I was not game to say that I'd booked them to do the Queensland tour with me. They got themselves 'high' on goodness knows what, locked themselves into the dressing rooms backstage at the town hall during the Awards presentation and refused to come out, until Phil Emmanuel screamed matching obscenities through the door and threatened to call the cops. 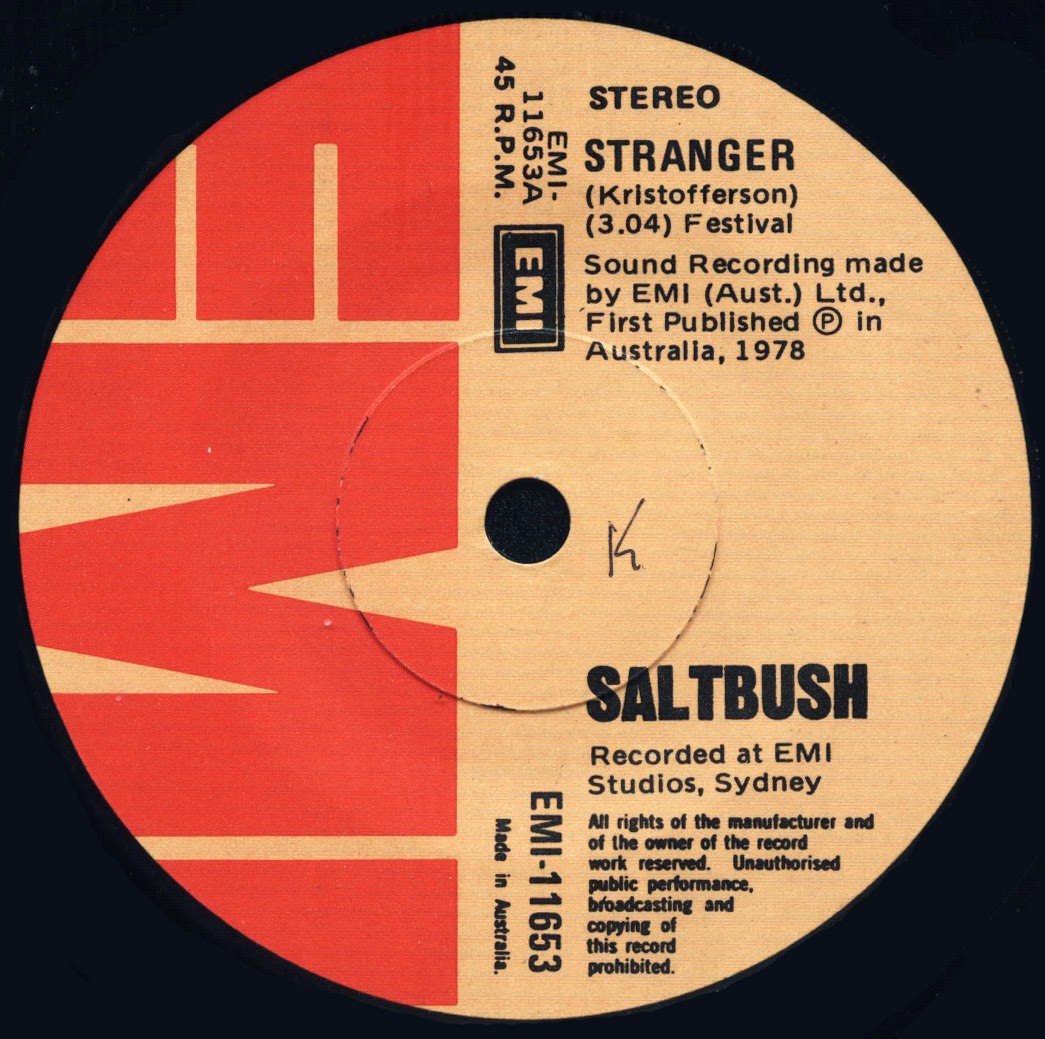 When it finally became known that I was taking them on tour, the industry was confounded. I knew quite well they might be a handful, but I always laid it on the line when employing anyone. I had two rules. I don't put anyone under a contract—an unhappy member of the team will never give his or her best and will upset everyone else—so if they want to go, then go, 'just give me time to get a .replacement'. The second rule was that everyone has to be sober for a performance, and there's no drinking backstage either, I like my beer as well as anyone, but if you let one start drinking around the show, you will always get the other who'll take it too far and wreck things. Needless to say, the boys had to be on their best behaviour this time! [extract from p219]
.
This post consists of  MP3's (320kps) ripped from my vinyl copy (which was acquired in mint condition only recently) along with full album artwork. Although I'm not a big fan of Country / Bluegrass music, Saltbush style is more like the Dingoes or Redgum which tends to be more commercial and mainstream.
I have also included some bonus tracks, two tracks from their first album 'At Twin Rivers', the A & B side of a single released just before they broke up in 1979, and the two live tracks from the 'Live At The Station' LP which I plan to post in the near future.
.
Track Listing 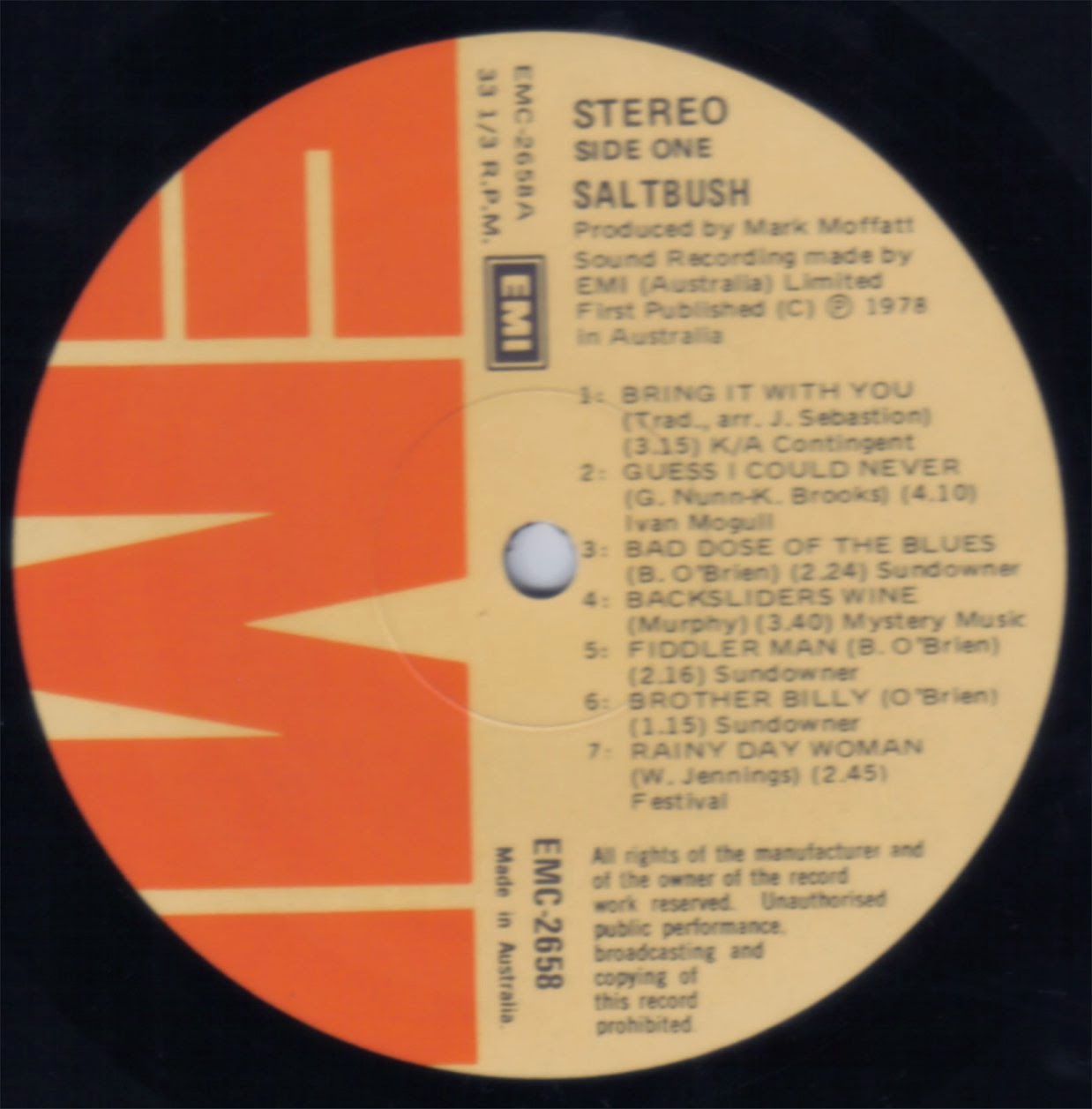 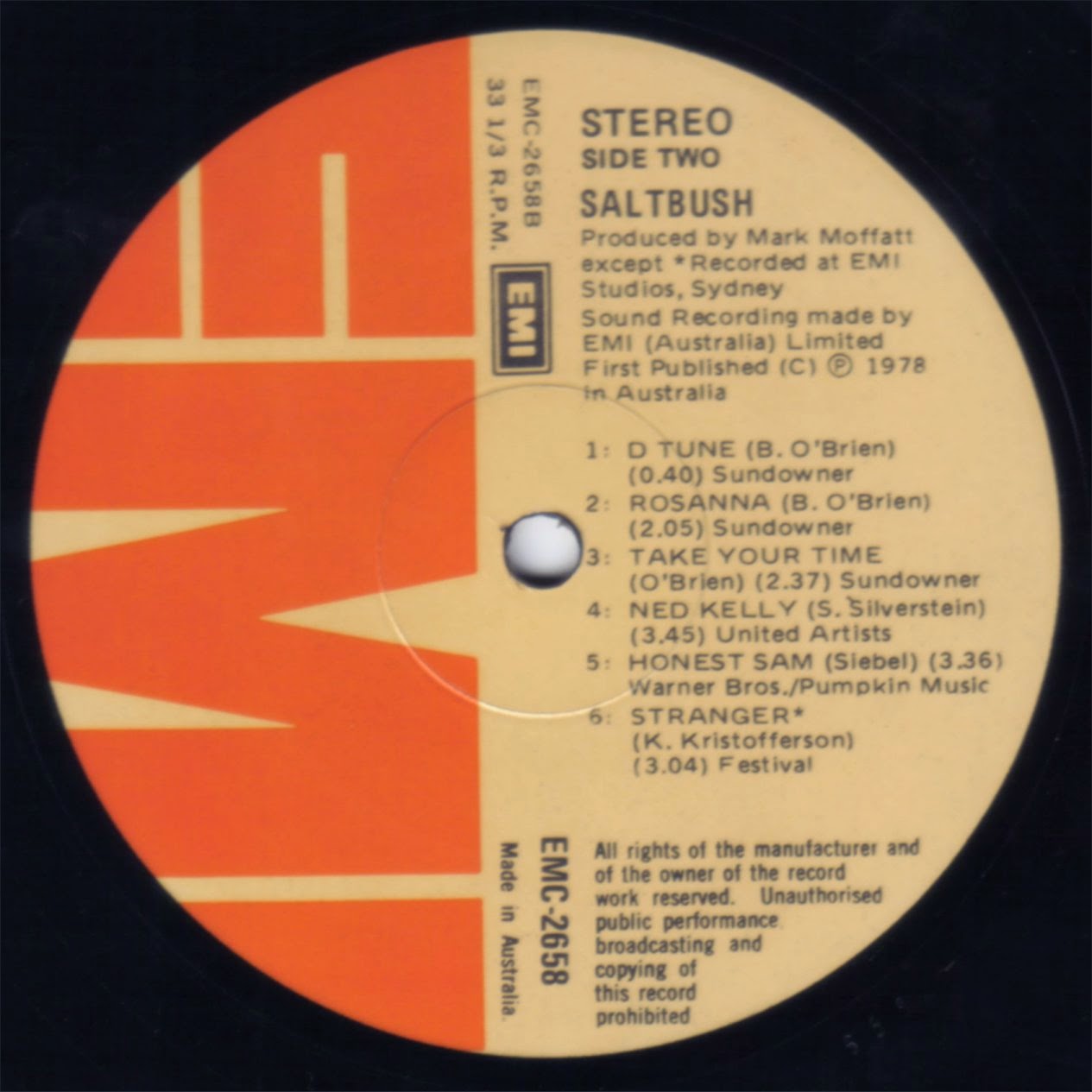