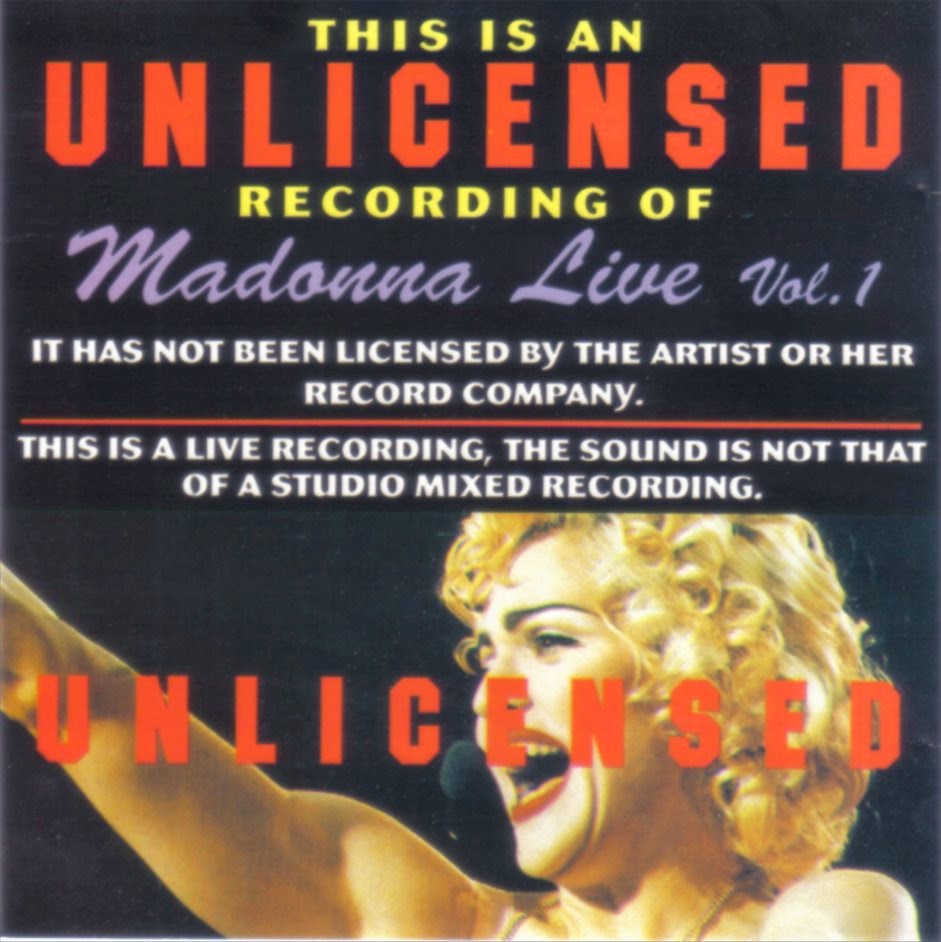 In 1990, Madonna continued to explore and develop her own ideas about ambiguity in gender and sexuality, a feminist agenda in which a woman is in control of her body, her role and her life. Although she examined this theme in her "Like A Prayer" video, it was most fully expressed in her audacious four-month twenty-seven-city 'Blonde Ambition' tour, which established her as a modern-day Amazon, her erotic and exotic routines invariably ending with the woman on top. She strutted the stage in contemporary armor, Jean-Paui Gaultier's cone-shaped bustier, presenting an enduring image of Madonna at superwoman, her dancers playing musclebound slaves utterly subservient to her will. Yet the French designer's description of the garment that will be forever identified with the singer can also be applied to her own psychology; as he said,'A tough outer shell protects hidden vulnerability.' [extract from 'Madonna' by Andrew Morton, Bantam Books, 2001. p164]
. 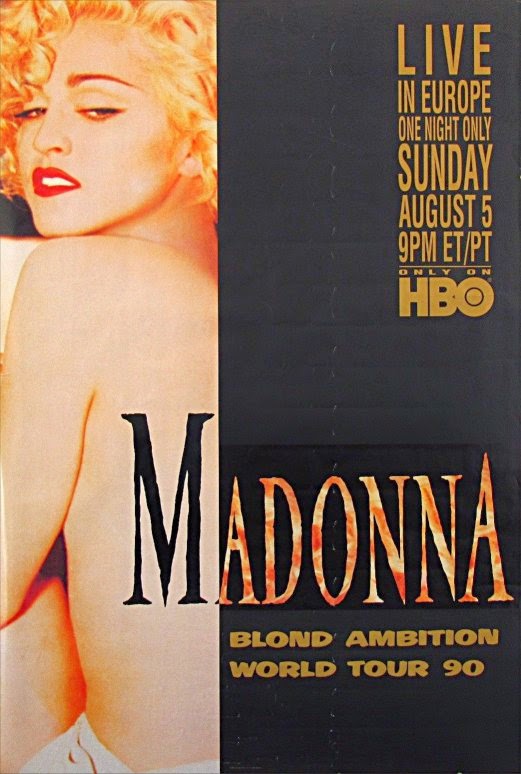 Blond Ambition Tour
While riding high on her success in Dick Tracy, Madonna kicked off her third and most imaginative tour to date on 13 April 1990. When tickets went on sale, 2500 were sold in one minute-a new record in the entertainment industry. The Blond Ambition Tour opened at Chiba, Japan's new Marine Stadium, to enthusiastic reviews. The futuristic out-door venue at Chiba provided a fitting locale for the show, a highly theatrical extravaganza. The surrealistic atmosphere was heightened by the rain that began to fall just as the show opened. Adhering to the philosophy that 'the show must go on,' Madonna braved the downpour, and though the show had to be briefly interrupted a few times to sweep the rain from the stage, the audience was delighted that the singer was willing to carry on. Three years earlier high winds had forced Madonna to cancel her Tokyo show, and she wanted to avoid another cancellation at all costs.

The tour coincided with the release of Madonna's latest album, 'I'm Breathless', the title of which provides a clever tie-in with her starring role as Breathless Mahoney in Dick Tracy. Described on the album sleeve as 'music from and inspired by the film Dick Tracy,' I'm Breathless is a departure from what Madonna has done before With the notable exception of "Vogue",' which seems written specifically for the top 10, the music evokes the era of torch songs and swing tunes. Her voice, too, is different. The bright chirp of "Holiday" is now deeper and darker. Three songs from the album -"Sooner or Later," "Now I'm Following You," and "Hanky Panky" - were featured in the glitzy 'Blond Ambition' show. 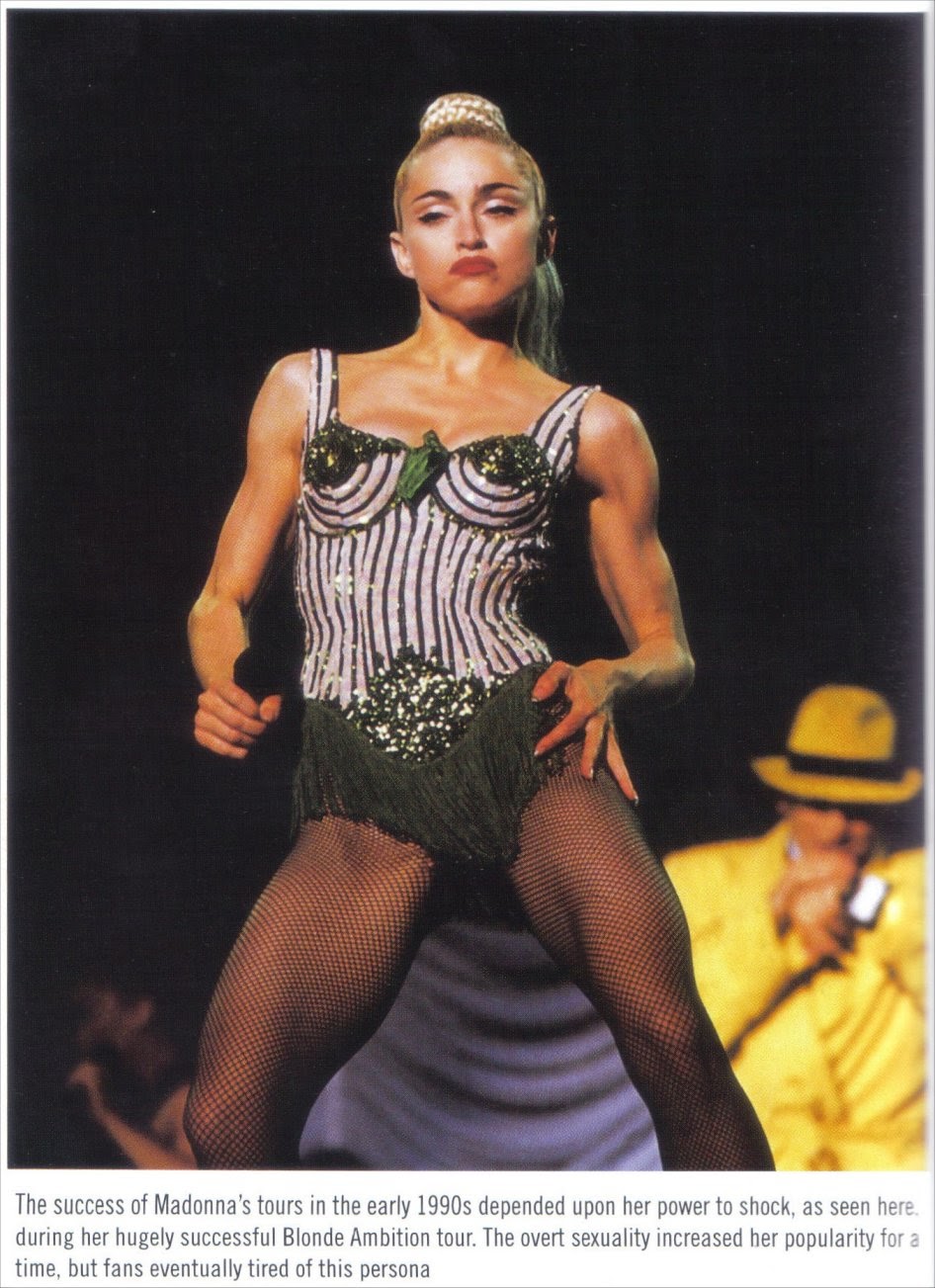 Madonna's latest tour had been likened to a Broadway production, With the band relegated to the sidelines, the emphasis is indeed on the action that unfolds on the stage. The show brings to life her songs and videos. Her performance is an exercise in precision, a ballet, rather than a rock concert. With its sexy costumes and suggestive banter, it is also intended to shock. "Like A Virgin" found Madonna sprawled on a bright red bed. As  she rubbed her hands over her body, her two male companions massaged the fake, pointy breasts that were attached to their bare chests. As choreographer Vince  Paterson explained, '[Madonna] wanted to make statements about sexuality, cross-sexuality, the church and the like.' An essential part of the message was delivered by Madonna's exotic costumes, one of which was a pinstriped man's suit with cutouts for her breasts. 'I like the mixing of femininity and masculinity,' explained designer Jean-Paul Gaultier. 'Of course with Madonna, the femininity explodes through the masculinity. It's a little bit surrealistic. It's kind of an obsession in America, you know, the pointed breast.' 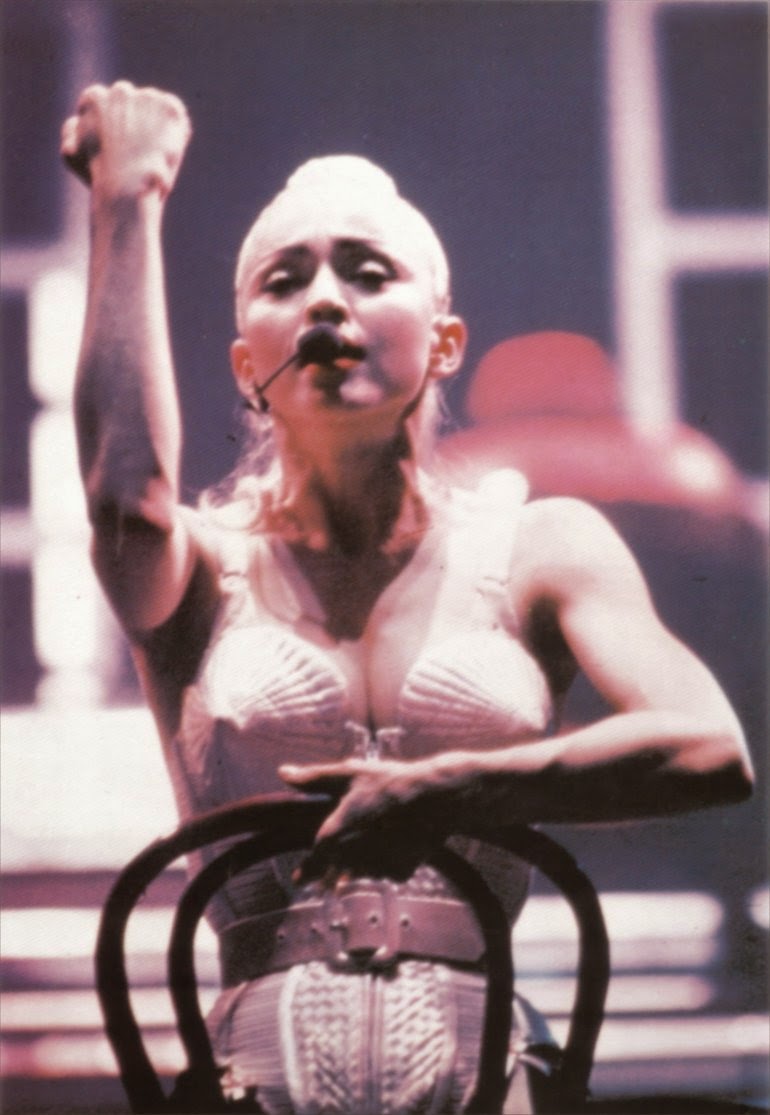 Madonna has always been known and even criticized for the blatant sexual imagery of her shows. Her image has invited criticism from feminists who believe that she portrays women in a negative light. Madonna, however. believes that her message is just the opposite. "People have this idea that if you're sexual and beautiful and provocative, then there's nothing else you could possibly offer. People have always had that image about women. And while it might have seemed like I was behaving in a stereotypical way, at the same time, I was also masterminding it I was in control of everything I was doing, and I think that when people realized that, it confused them. It's not like I was saying "Don't pay attention to the clothes-to the lingerie-I'm wearing." Actually the fact that I was wearing those clothes was meant to drive home a point that you can be sexy and strong at the same time. In a way, it was necessary to wear the clothes.'

In other words, the Boy Toy is not a sex object; she is the boss, the woman warrior, equipped with armored under-wear. Blond Ambition is about female power. She does after all, knock down her chorus line of men. 'It's a great feeling to be powerful. I've been striving for it all my life. I think that's just the quest of every human being: power.' The Japanese press concentrated on writing about Madonna's sexual shenanigans to the point of ignoring other aspects of the show, but the response in Japan was a decidedly positive one: Madonna reportedly earned $14 million for just nine shows. They may have loved her in Japan, but the welcome Madonna received elsewhere was far less cordial. In Toronto, police asked her to tone down her show. When she refused they set themselves up in the stadium with binoculars, presumably ready to rush to the stage and arrest her if she committed any illegal acts in the course of her performance. In Italy, Catholic groups in Rome and Turin called her show vulgar and blasphemous and demanded that Madonna's concerts be banned. Many church officials were especially disturbed by Madonna's routine use of a crucifix as an article of costume jewelry. The reaction was an intensified version of the controversy that had surrounded her 'Like A Prayer' video the year before. Protesters in Italy were successful in forcing the state-run television network to stop running the video. 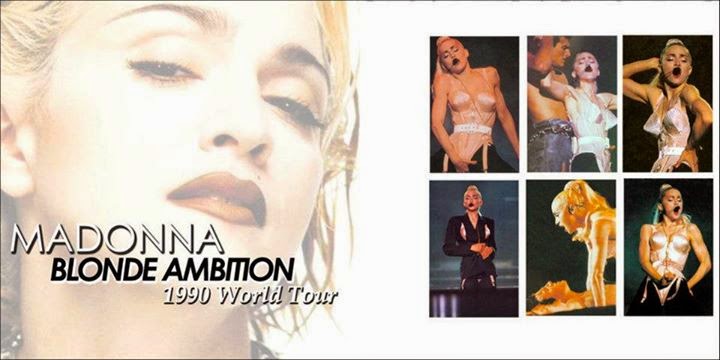 As is her nature, Madonna held strong to her position. She called a press conference and invited the church leaders to 'Come and see my show and judge it for yourselves. My show is not a conventional rock concert, but a theatrical presentation of my music and, like the theater, it poses questions, provokes thought and it takes you on an emotional journey. This is what I call freedom of expression and thought. By preventing me from doing the show, you would be saying you do not believe in these freedoms.' Church leaders declined her invitation, but the show went on as scheduled. 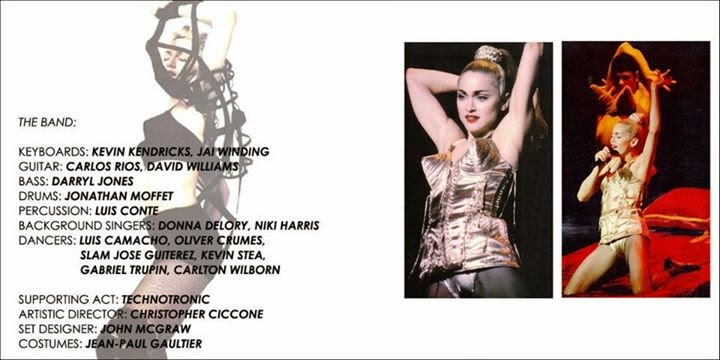 Controversy goes hand-in-hand with being an artist. A work of art-be it a novel, a sculpture or a performance-challenges the intellect. As an artist who strives to be thought-provoking and entertaining, Madonna has never shied away from controversy, and will undoubtedly continue to do so with her future creative endeavors [extract from Madonna, by Marie Cahill, Bison Group, 1991. p84-88. See below]
.

This post consists of MP3 (320kps) ripped from the Australian AMCOS CD bootleg release and presents  the first half of the show. There was a Vol 2 released which provided the 2nd half of the show, but I have yet to source it I'm afraid. Nevertheless, the song selection on Vol 1. is the better of the two in my opinion.
Full album artwork is provided, along with Italian 'Maverick Bedtime' bootleg release which features the full show (see below). The recording itself comes from the Dallas Show at the Reunion Arena in the USA, held on May 7, 1990.  The quality of the recording is very good with exceptional vocal clarity. (Please note that I have edited the opening track "Express Yourself" by removing a minute of annoying sound affects which would have supported the visual component of the shows introduction). 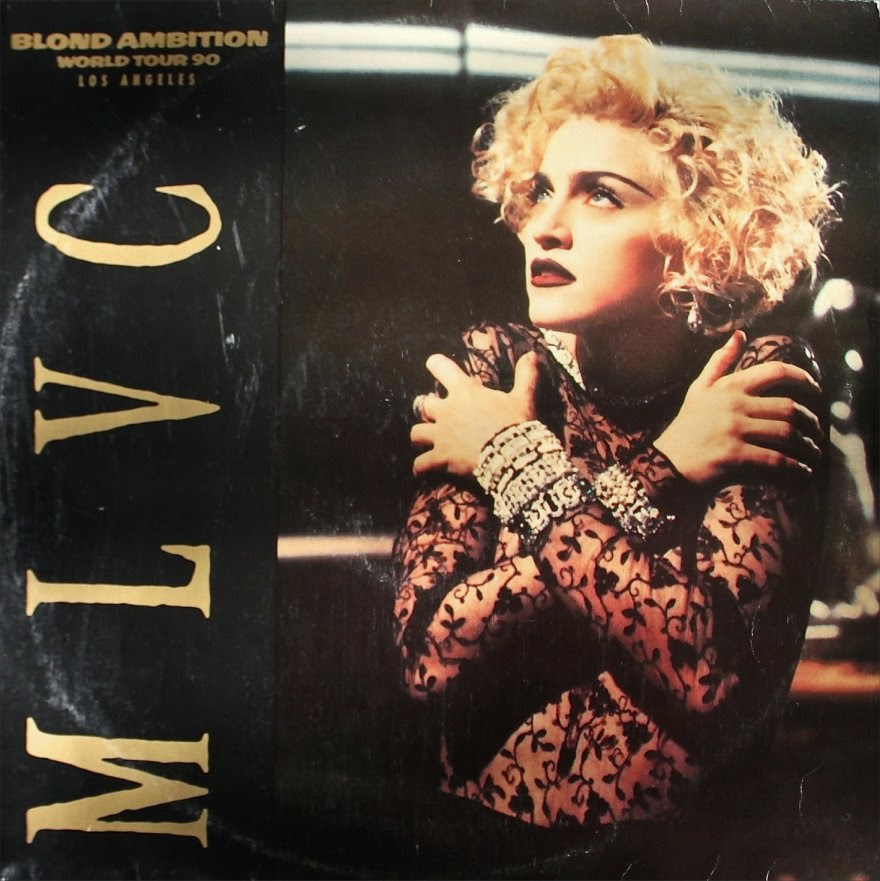 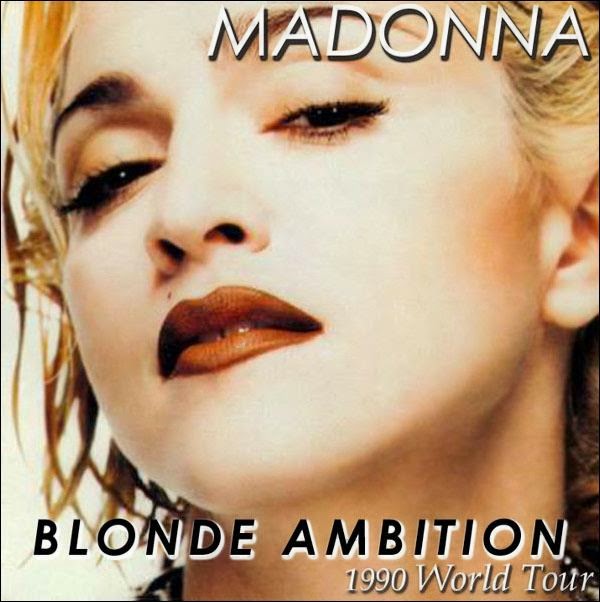