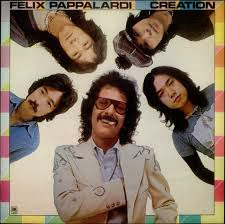 Felix Pappalardi was most famous as the producer of Cream and the bassist for one of the first American hard rock acts, Mountain; sadly, he's also remembered for the tragic shooting that claimed his life at age 43. Pappalardi was born December 20, 1939, in the Bronx and studied classical music at the University of Michigan; upon returning to New York, he was unable to find work as a conductor and soon drifted into the Greenwich Village folk scene. He soon made a name for himself as a skilled arranger, and from there moved into record production, initially concentrating on folk and folk-rock acts like Tim Hardin, the Youngbloods, Joan Baez, Richard & Mimi Farina, Ian & Sylvia, and Fred Neil. However, it was Pappalardi's late-'60s work with the psychedelic blues-rock outfit Cream — beginning with their second album, Disraeli Gears — that really established his reputation; Pappalardi sometimes contributed additional instrumentation for his imaginative studio arrangements and he and wife, Gail Collins, co-wrote "Strange Brew" with Eric Clapton. In 1968, Pappalardi was asked to produce an Atlantic Records band 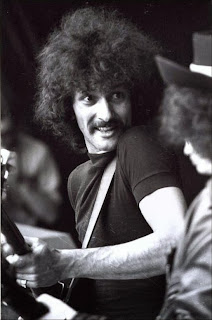 called the Vagrants, which featured a young guitarist named Leslie West. The following year, he produced West's solo album Mountain; after Cream disbanded, Pappalardi and West formed the hard rock band Mountain, whose hit single "Mississippi Queen" remains a staple of classic rock radio. Mountain broke up in 1972, reunited in 1974, and disbanded again in 1975; afterwards, Pappalardi was forced to, for the most part, retire from performing due to partial hearing loss caused by Mountain's extreme volume. However, he was able to return to production, and also recorded an album with the Japanese hard rock outfit Creation, who had opened for Mountain on their Japanese tours; Felix Pappalardi & Creation was released on A&M in 1976. In 1979, Pappalardi released his first proper solo album, Don't Worry, Ma, which reflected his growing interest in funk, jazz fusion, and reggae, and featured a large supporting cast, including bassist Chuck Rainey and drummer Bernard "Pretty" Purdie.On the night of April 17, 1983, tragedy struck: Pappalardi was shot once in the neck by his wife, Gail Collins, and killed. He had been involved in a long-standing affair with a younger woman, of which Collins had knowledge; however, a jury supported Collins' claim that the shooting was accidental, occurring while Pappalardi was showing her how to use the gun. She was convicted of criminally negligent homicide rather than the far more serious charge of second-degree murder; sentenced to four years, Collins quietly disappeared afterward.
. 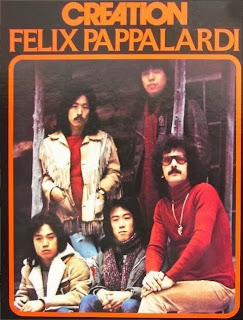 (Blues) Creation was formed by guitarists Kazuo Takeda, Koh Eiryu and singer Fumio Nunoya, in early 1969, after the dissolution of their Group Sounds outfit The Bickies. Takeda played many guitar sessions and slowly began to gain confidence in himself as a lead vocalist, so much so that when he returned to the Japanese music scene, in 1973, to support Mountain, it was as the lead singer/guitarist of a new power trio called simply Creation.
The urbane and gregarious Takeda hit it off with Leslie West and Mountain drummer Corky Laing, but became even bigger mates with bassist Felix Pappalardi and his wife Gail Collins, who had written most of the lyrics for Mountain's hits.
However, Creation did not release their first LP until 1975, by which time Takeda, nervous of his new role as lead singer invited rhythm guitarist Yoshiaki Iijima to join drummer Masayuki Higuchi and bassist Shigeru Matsumoto in the new line up. Takeda contacted Felix Pappalardi and asked him to produce the second Creation LP.
Pappalardi, temporarily deafened by the high volume at which Mountain always played concerts, had already decided to concentrate on studio production, and so he and his wife began to write songs with Takeda at their Nantucket home in Massachussets. In April 1976, the results were released in Japan as "Creation With Felix Pappalardi" and in the US as  "Felix Pappalardi & Creation". Unfortunately, the international acclaim that Kazuo Takeda so longed for was still unforthcoming, although the record was once more a mighty success in Japan [by Julian Cope ]
.
Album Review
Recorded in 1976 at Bearsville Studio in NYC, this album was the result of a collaboration between Japanese guitar hero Kazuo Takeda of Creation and American bassist Felix Pappalardi of Mountain. Pappalardi and Takeda first began hanging out in London in the early seventies, a friendship which soon led to Mountain touring Japan alongside Creation in 1975. This in turn led to Creation being invited to the US by Pappalardi to record their next album, 1976’s Creation with Felix Pappalardi. This album is a collection of tunes written by Pappalardi, Pappalardi’s wife, Gail Collins, and Takeda, and finds Pappalardi playing bass, keyboards and vibraphone on the LP as well as handling production duties. The songs are a blend of melodic hard rock akin and would not seem out of place on a Mountain album.
The songs range from fairly psychedelic power ballads reminiscent of early Mountain to a more robust brand of Heavy Metal exercises in a showcase of almost-tremendous talent, if not the same force, rather than art, Pappalardi's group Mountain really gave their material...
.

Dog: Flash, tell us what you've been up to these days. Where are you located and what projects have you been involved in?

Flash: I live in Los Angeles, and playing in my own band [Jazz & Blues). Also playing as session guitarist for local blues,R&B, and Gospel artists. My group has just returned from a three week Asian tour. I also occasionally work as producer, mainly for Asian Blues, Jazz, and R&B artist.

I understand that "Thunder" Higuchi is still quite active as well. Are you guys doing anything together? 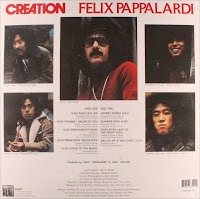 Creation was quite popular in your part of the world prior to Felix joining the band. How did it come about that you wound up playing with him?

Flash: In '73 Creation toured with Mountain as the opening act, and on this tour Felix and I became close and he liked our music too. In '75 Felix came to Japan for a Summer Rock festival. That was the first time we played together with his Special Band named "The World Rock Festival Band." Around that time, Creation was about to make our 2nd album for EMI , and we asked him to produce our next record. He gave us the green light. The band flew to the States, and while we were rehearsing at Felix's Nantucket home, things has changed to another dimension... which was the new project "Felix Pappalardi & Creation." After two month of rehearsal we went to the Bearsville studio to cut the album.

How did you guys and Felix manage to pull it off, given the distance between you?

Flash: At the time our agency and record company were fully supportive of our over- seas activities. Also Felix liked Japan so much! So either we go to the States or Felix comes to Japan. That worked well.

Did the distance limit or have any effect on your ability to do concerts?

Flash: Physically it didn't. However, mentally there was a few. Especially when I played his hit tunes in the States. I tried to play appropriate licks in order to fit its original record, e.g., Nantucket Sleighride and Imaginary Western were typical.

Felix was known for being, shall we say, "in charge" in the studio. What was it like recording with him? 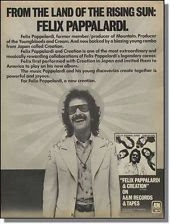 Flash: It was like everything was already done in rehearsal room. Meaning Felix gave us every essential advice and direction from the day one to the end. But what still impressed me was his studio skills. It was like magic!

How much input did you and the rest of the band have in the process of recording the Creation album with Felix? Who wrote the songs and who decided what made it on, what got left off and so forth?

Flash: I prepared and wrote about 10~15 songs for this record, and after we arrived at his home we (Felix, Gail & Me) selected materials again, had discussions almost every day and worked together to decide songs. Also around that time('75~76 ) the music scene was changing from '60's flavored Hard Rock to more Rhythm oriented music. Simply said, funk and new types of Jazz were on the market. Also, Felix was so curious about Reggae music. Incidentally, even though I like our album, I like his "Don't Worry, Ma" album a lot.. we can see his reggae influence, or at least his more rhythm oriented side on that record. He recorded Albert King's "As The Years Go Passing By" on that album. That was the song he picked up from my traveling cassettes collection. And we played that song many times together live. Also I remember he said Chuck Rainy was his favorite bassist. Except Jack Bruce. I guess to him Jack was more like his brother.

Were you happy with the final outcome of the album?

Flash: Oh, Yes!
.
This post consists of an MP3 rip (320kps) taken from my vinyl copy and includes full album artwork, including the covers for the French pressing (see below). As a bonus, I have also included some live tracks from a concert they recorded at the Budokan indoor Arena, in 1976. These live tracks not only cover repertoires by Blues Creation and also Pappalardi's earlier band Mountain. In particular, their rendition of Nantucket Sleighride is quite impressive and demonstrates just how good these guys were. If you're are a big fan of Mountain, then you'll definitely enjoy this album.
.
Track Listing 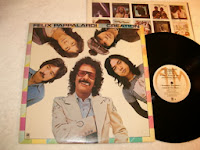 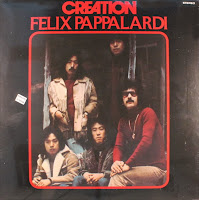