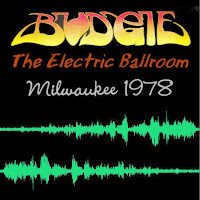 Budgie's seventh album, 'Impeckable', arrived in January 1978. The following month saw a well attended clutch of UK theatre shows prior to engaging in their lengthiest US trek - quaintly entitled the 'Hide Your Pussy Tour', taking the band right through the summer months. Budgie had previously recruited the ex-Quest member in second guitarist Myf Isaacs. Their next foray stateside produced the much in demand 'Live At Atlantic Studios' live tapes and this bootleg set called 'The Electric Ballroom', material much sought after by collectors. Isaac also played on their Impeckage album,although he is notlisted in the album credits as a band member, but rather only listed with thanks.
.

Upon their return to Britain Budgie unceremoniously split with Isaacs who went onto other Welsh acts such as Bando, Crys and Eden. Budgie decided to retain their guitar arsenal with the recruitment of Rob Kendrick as a replacement for Isaacs. The year was seen out with a further successful run of UK concerts throughout October and November. Tony Bourge left Budgie in July- Aug 1978, only two months after this recording in Milwaukee.
.

.
Bootleg Background
Budgie coming to town was a big thing!  Getting free passes to it was a dream.  The show was great, I got a few photos and autographs on LPs and press pictures.  Then I found out that the brother of this guy I knew worked for the company that did the sound for the show.  When the guy said that I could have a copy of the tape his brother made, I rushed over to their house with my reel-to-reel machine. This seed is an unadulterated digital copy of my 1st generation tape of the show.  The first track is missing a bit of the beginning because, as I was told, the brother was a little slow in hitting the record button.  There's a tape flip in track 8.
.
.
I traded it quite a few times over the years and parts of the show appeared on a couple of bootlegs, "Live At the Electric Ballroom" and "Dodge City" (I hope the bootleggers didn't use one of my traded cassettes).  The date often gets listed as April 5th, but it was May 4th as the scan of a pass will show.  I also scanned in one of my old faded photos from the show (see next to pass).  Burke is without his glasses because, as we were told, he had gotten them broken the night before in a scuffle in some bar (probably Chicago! just joking).  So here it is in all of it's glory! [original poster unknown]
.

.
NOTE: There is another release of this bootleg floating around with the same title released by Wild Street, however the track listing is inferior (with some of the tracks incorrectly labelled using non-standard Budgie titles) and is also missing tracks, as well as citing the incorrect date as 4 May, 1975.  A rather pathetic effort all round to be honest - typical of some second rate bootleggers.
. 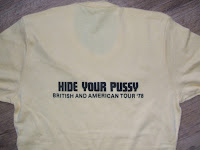 This post consists of an mp3 rip (converted from FLAC) and includes full album artwork and photos of the band from 1978. The sound quality of this soundboard is very good and Tony Bourge is on fire with his guitar work, introducing some new riffs amongst his standard ones. The only short-coming of this recording is that track 1. "Melt The Ice Away" cuts in while there is a brief outage during track 8. "Don't Dilute the Water " due to a tape flip.
Overall, a must for all Budgie enthusiasts and a rarity to find indeed. But be warned, don't let em' fly off with your pussy. LOL
.
Track Listing
01. Melt the Ice Away   (cuts in)
0 2. In the Grip of a Tyrefitter's Hand 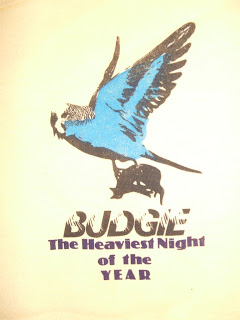 Posted by AussieRock at 8:39 PM