Found this track in cyberspace awhile back, while trawling the web for weird and wonderful music. As soon as I heard this song by Los Destellos I was taken back to my early childhood days when beatnik's and hippie's were prevalent influences in music and culture.
Beatniks evolved from the cool 50's youth culture. They wore berets and polo necks and hung out in coffee shops playing bongos and reciting poetry and experimenting with marijuana. They pre-dated the hippie movement by about 10-15 years. Dobie Gillis (aka. Bob Denver from Gillian's Island) was a beatnik on his own T.V show. Man, they were some cool cats!
Anyhow, this track entitled "Onsta La Yerbita" has some real crazy sounds and I just love the voice over by Enrique Delgado.

Under the direction of lead guitarist Enrique Delgado, Los Destellos (the sparkles, like a star) are 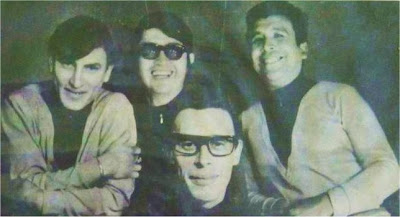 pretty much known as the founders of Cumbia Peruana circa 1966. Now I am pretty sceptical about using the word chicha to define their genre of music. I feel that chicha is more associated with 70's and 80's transient Andean cumbia, a music that is probably rooted more in Amerindian sounds, beliefs and the harshness of the Amerindian experience (hardship, displacement, lament). Whether they influenced the chicha movement later on or became part of it by default, I’m not 100% sure.

However, Los Destellos appear to

be more part of the Lima Mestizo culture (mixture of Indian/Spanish blood). And can be reflected in the way which their sounds fuse Latin boogaloo, psychedelic rock, soul, Colombian cumbia, tropical and indigenous music in a whole host of ways.
Apparently Los Destellos had a resurgence of popularity in the 80's that lasted until Enrique Delgado died in the early 90's. The band still performs today, but I believe it’s the widowed wife of Enrique who runs the band.
.
.
Anyhow, if you are looking for something 'totally different' and 'just a little Weird', then you have a listen to this track. Now, where did I put my bongo set ?
.
Los Destellos - Onsta La Yerbita (9Mb) 320kps Link Fixed 30/06/2016
.
Posted by AussieRock at 10:51 PM