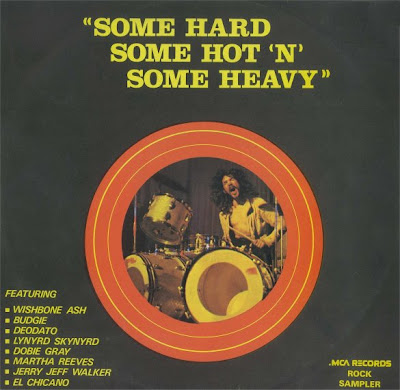 This is a record sampler released my MCA in 1974 to promote some of their big name artists, including names such as Lynyrd Skynyrd, Wishbone Ash and Budgie. What really attracted me to this album, when I saw it on the record shelves was the familiar shot of Ray Phillips (first drummer for Budgie in the 70's) on the front cover.
This photo originally appeared on the gatefold of Budgie's most successful album 'Never Turn Your Back On A Friend'. I'm sure this budget release sold twice as many copies simply because of the great cover, unlike other record label samplers such as Gull and Bearsville which featured fairly boring covers. I plan to post these in the near future also.
Some artists were new to me at the time (eg. Wishbone Ash, El Chicano), and after hearing them on this sampler, I chased up their albums immediately. However, there were still a few 'throw away' tracks that really didn't appeal (Martha Reeves, Jerry Jeff Walker) and a few I was already familiar with (Budgie, Lynyrd Skynyrd). Needless to say, the album did its job and I ended up buying some of the albums these tracks were taken from. Overall, it is not a bad collection of songs covering a wide variety of music genres, making it a nice compilation to listen to.
So, to get your taste buds going, I'm providing a brief run down of each artist/band featured on this sampler.
. 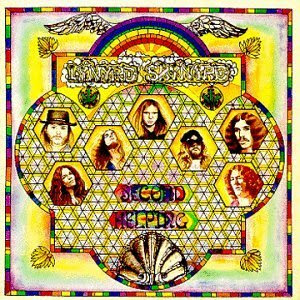 LYNYRD SKYNYRD - Second Helping (1974)
Lynyrd Skynyrd wrote the book on Southern rock with their first album (from which the catchy "Gimme Three Steps" track was lifted), so it only made sense that they did the same for their second album, aptly titled 'Second Helping'. Sticking with producer Al Kooper (who, after all, discovered them), the group turned out a record that replicated all the strengths of the original, but was a little tighter and a little more professional. It also revealed that the band, under the direction of songwriter Ronnie Van Zant, was developing a truly original voice and sound.
Although 'Second Helping' isn't as hard a rock record as the first, it's the songs that make the record. "Sweet Home Alabama" became ubiquitous, yet it's rivaled by such terrific songs as the snide, punkish "Workin' for MCA," the Southern groove of "Don't Ask Me No Questions," the affecting "The Ballad of Curtis Loew," and "The Needle and the Spoon," a drug tale as affecting as their rival Neil Young's "Needle and the Damage Done," but much harder rocking.
. 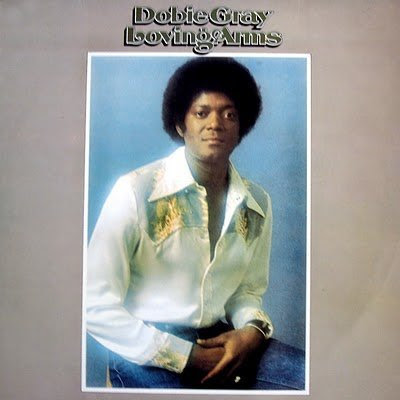 DOBIE GRAY - Loving Arms (1973)
With MCA Records swallowing up the Decca imprint, 1973's "Loving Arms" continued Dobie Gray's partnership with producer Mentor Williams. Powered by his distinctive gravelly voice and backed by an all star cast of Nashville studio pros, musically the album wasn't a major departure from his 1972 breakthrough "Drift Away" album. Like the former, tracks such as 'Good Old Song', 'You and Me' and 'Lovin' the Easy Way' offered up a catchy blend of soul and country genres. But standout performances would have to be 'Reachin' for the Feeling' (the only Gray-penned original), 'Mississippi Rolling Stone' and 'Love Is On the Line'.
Interesting to note that his other track on this sampler "L.A Lady" was lifted from his earlier album 'Drifting Away' which is the better album in my opinion
. 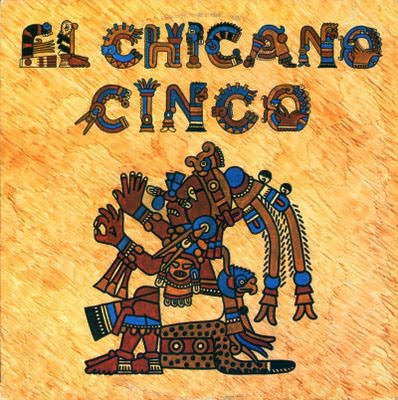 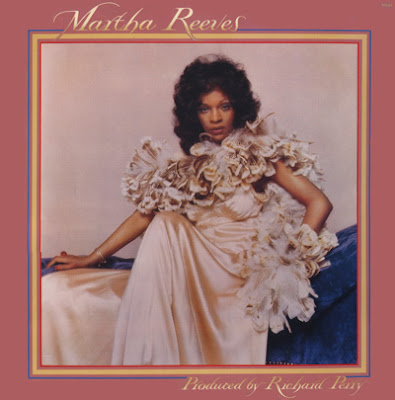 MARTHA REEVES - Selftitled (1974)
After an amazing run fronting the Vandellas at Motown, with 23 pop charting singles including such classics as 'Heat Wave,' 'Dancing in the Street,' and 'Jimmy Mack,' Martha Reeves parted company with both the Vandellas and her former label, Motown. Signing to MCA after a lawsuit to extract her from her previous contract, her 1974 solo debut was highly anticipated and well received by her fans.
The selftitled album, produced by Richard Perry,was reportedly the most expensive album of that time, costing $250,000. Featuring the singles, "Power of Love" and "Wild Night", the album was a critically favored smash, though it failed to generate commercial success as did Reeves' subsequent follow-ups on other labels including Arista and Fantasy. I'm not really sure why MCA included this below average track "fascimile" on their sampler as there are much better tracks on her album which they could have used instead.
. 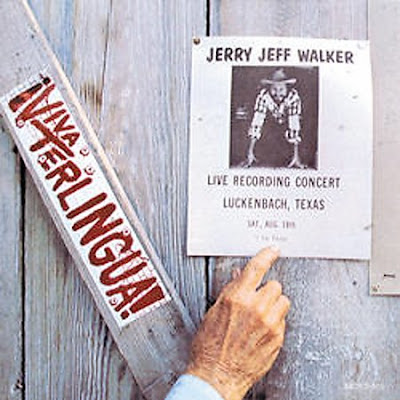 JERRY JEFF WALKER - Viva Terlingua (1973)
Jerry Jeff Walker is an American country music singer and songwriter. He is probably most famous for writing the song "Mr. Bojangles.
Recorded live in Luckenbach, Texas, this LP is Jerry Jeff Walker's best known album and one of the crucial artifacts of the early outlaw country movement of the 1970s. As far live albums go, however, it's a pretty laid back affair (you can only really hear the audience on Ray Wiley Hubbard's anthemic "Up Against the Wall Red Neck Mother" and Lost Gonzo band member Gary Nunn's "London Homesick Blues.")
Still, Walker and the Gonzo accomplices are in terrific form here, with wonderfully loose performances of favorites like "Sangria Wine." And the sound? Well, it's as relaxed and intimate as you could want.
. 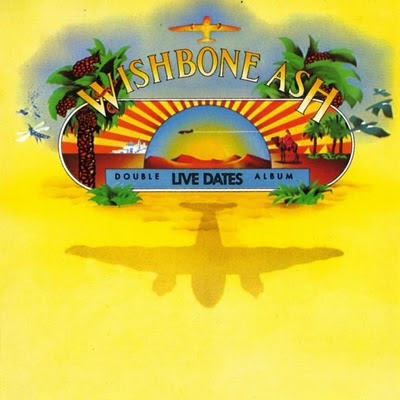 WISHBONE ASH - Live dates (1973)
Wishbone Ash were one of the top guitar bands in the Europe of the 1970s, although they were and remain barely known in the US. They even became tax exiles and lived in the States at the end of the 70s. This album is one of the very best live albums from the 70s, if not ever, for classic two-guitar rock.
Live Dates captures the sound and vibe of Wishbone Ash live. The stylistic diversity is quite clear from their take on boogie numbers including "Jail Bait, Lady Whiskey" and the cover of "Baby What You Want Me To Do". These tracks are surrounded by the pop of "Blowin' Free", the progressive rock of "The Pilgrim", "Phoenix", and "Warrior" along with the quieter English folk of "Ballad Of The Beacon", which in my opinion is an all time classic track.
. 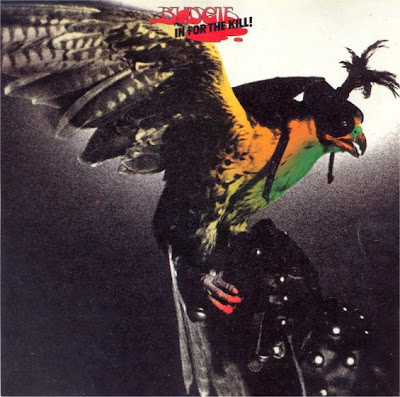 BUDGIE - In For The Kill (1974)
Budgie’s fourth release, confirmed their consistent metal songwriting. Like past releases, the album features huge metal riffs courtesy of guitarist Tony Bourge and wailing vocals from bassist Burke Shelley.
“Crash Course in Brain Surgery” (again covered by Metallica) contains a repetitive and continuous riff, while “Zoom Club” stresses the importance of the almighty power chord.
"Zoom Club" is one of Budgie's longest tracks, clocking in at nearly 10mins and it has always been a big favourite with their fans when played live. The title track (rumored to have been covered by Van Halen back in their club days) is metal at its most vibrant, while the group balances the album by including a folk number with Beatles-like vocal harmonies (“Wondering What Everyone Knows”).
“Living on Your Own” continues the band’s tradition of lengthy closing numbers, ending another sadly overlooked album from this British band. If by chance you haven't heard this album, then it is well worth pursuing and the remastered edition (as is their full catalog) available from Budgie's website.
. 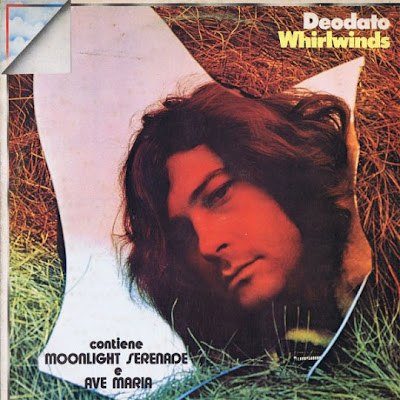 DEODATO - Whirlwinds (1974)
With the phenomenal success of 1972’s Prelude, which included the surprise hit single reworking of Also Sprach Zarathustra, and its successor Deodato 2 (both released on Creed Taylor’s CTI label – at the time the pre-eminent contemporary jazz-fusion imprint), 'Whirlwinds' come from Deodato’s two-year soujourn with MCA.
As an orchestrator, arranger and composer, Deodato is rightly not only famed for his definitive early 70s fusion sound, but also his daring transformations of a wide variety of source material. Whirlwinds showcases this in spectacularly widescreen fashion, with Whirlwinds taking in originals as diverse as Glenn Miller’s Moonlight Serenade, Schubert’s Ave Maria and Steely Dan’s "Do It Again".
. 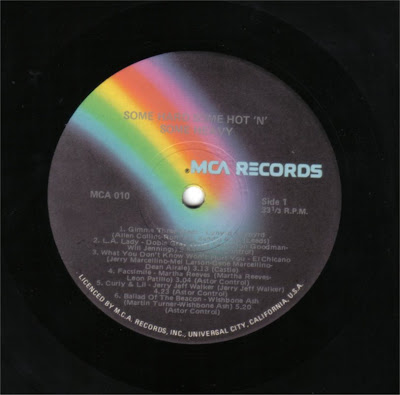 This post contains a rip taken from vinyl at 320kps and includes album artwork and label scans. I have also included the album covers featured here along with track listings for all albums.
Finally, you have to agree that the album title is pretty catchy and the selection of artists is broad, so why not have a listen and let yourself be the judge.
.
Track Listing 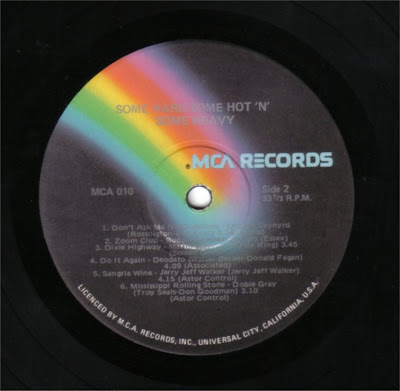