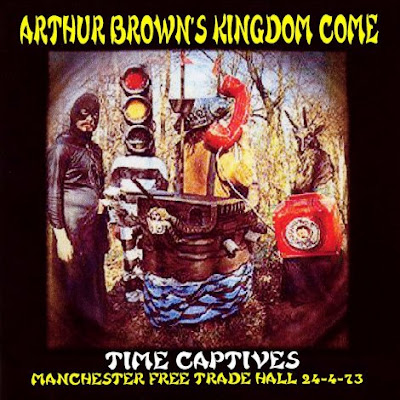 Lock up your daughters, the weirdos are back.
.

"I'd like you to meet Ace Bentley, our new drummer," said Arthur Brown. Ace sat immobile between Arthur's knees. Slick and black, he says nothing, but he's a neat little fellow: he'll slip from a tango to a slow rock beat in a split second, keeps perfect time throughout and never has volume problems.
A Rhythm Ace drumming machine may not be the most soulful of instruments, but in the context of Kingdom Come's latest mutation it seems to fit perfectly well. "We got rid of our last drummer through mutual admiration," says Arthur.
Since I last saw them, at the Rainbow with Alice Cooper, they've been through two stage acts. Changeable people: "The last one was much more balanced in terms of the situations it had, with a lot more humour in it. This one we're doing now is a lot more simple. Actually, not having a drummer has pushed the music forward a long way."
Though it isn't exactly a matter of compensating for the lack of a live drummer, Andy Dalby explains: "The thing at the moment is that we've all got something to do - we've all got a job to do when we're playing, whereas before there was always someone who didn't actually need to be doing anything, but who did it anyway." 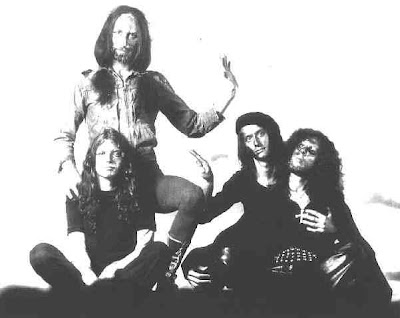 Arthur: "It's just a completely different music. It's not like having an electronic drummer, it's just like having a different percussion instrument and in order to use that concept the music obviously changes. For one thing, with Ace you can go in a tenth of a second from a rock beat through a tango to something else, adding claves and everything. There's so much more you can get into than with a drummer."

Andy: "You can't really compare them. It's like having a metronome instead of a drummer - we're not trying to make it sound like a drummer. We can get a better sound whenever we're on stage too - it's much better because everything's much quieter and you can actually hear what's going on. You don't have that acoustic problem of having to play as loud as the drums to get over before you start playing the music. It's a bit like being in a studio - you can control it."

Last time I say them, their stage act was pretty flamboyant too - complete with crucifixion and strange creatures like The Brain. "There's a lot more concentration now," says Arthur. "A lot less movement in certain parts and we're letting the lighting and the music speak for itself a lot more, rather than centering the stage act around characters doing things on stage. Rather than having a big personality thing, it's moved more into just the quality of the music and the lights, letting that do to the audience what in the old style we might have tried to do ourselves. [Steve Peacock, Sounds (17-6-1972)] 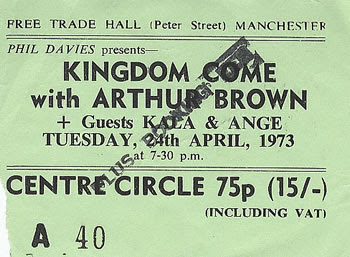 Live Stage Show Reviews:I have had a copy of 'Journey' ever since it was first released back in 1973. I also had the pleasure of seeing Arthur Browns Kingdom Come in Manchester in 1973.
Arthur's voice was at it's most powerful , with some nice guitar riffs provided by Andy Dalby and the Keyboards catered for by Victor Perraino with Phil Shutt on Bass. I have fond memories of seeing Arthur being placed inside a giant hyperdermic syringe on the stage at Manchester Free Trade Hall......ah!! Happy days.......If my memory serves me right the single "Spirit Of Joy" also charted in the UK and I recall hearing it played on the Tony Blackburn Show [S Frost Nullgrad of Manchester, England]

Such diverse elements as Mr. Brain (a small and lumpy grey matter severely dented by the education system), a boat, a human telephone, the Pope, traffic lights, a giant test tube, backdrops and the gauze screen, all contribute to Kingdom Come's weird and wonderful stage show. The show at the Rainbow on Friday seemed to be structured as a series of surrealistic sensations rather than any kind of unified story or message, and with the group's gold facial make-up it's a bit like a cross between Dr. Who and Dr. No. As always, with any group Arthur Brown's been involved in, a performance is not so much a concert as a constant barrage of music, ideas and visuals. 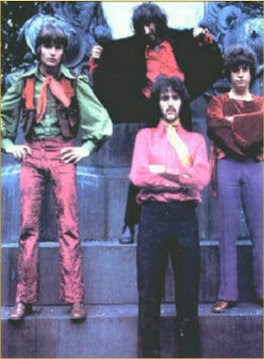 At the moment, the music seems to be losing out a little. After some inspired moments early on, there was an awful lot of numbers that just sounded like another heavy metal cliché, while Arthur did amazing things with his voice and legs in front. He remains one of the most perfect pieces of human mixed media in existence. His voice, with its huge range, is as powerful as ever and his strange style of movements make sure that Kingdom Come don't need a Stacia for their silver machine. But I found their music rather too machine-like, and it was a relief when a real drummer was included in addition to the drum machine for the encore. "Triangles", "Soothing music to send you off to sleep." Arthur called it, but it didn't stay that way for long. If Kingdom Come were a little less predictable musically and a little more predictable visually, I think there would have been more satisfaction and less puzzlement on my part. The audience seemed happy enough though, especially after Arthur had slid down the front of the stage to boogie enthusiastically with a Kingdom Comer in the aisle [see godofhellfire ]

I believe Arthur was the first musician to use a drum machine live on stage, well ahead of his time. OK, the technology was limited, but it adds a unique character to the music. I can't imagine Time Captives any other way! You may be surprised to know that Arthur is still touring (saw him not long ago). He usually plays in a trio. The other two musicians play acoustic guitar, violin, dulcimer, bass pedals and theramin. For rhythms, Arthur uses his foot and a 7-foot staff! During Time Captives, there is an approximation of the Bentley Rhythm Ace, but I have recently been trying to help him track down a vintage Rhythm Ace, as he wants the authentic sound where required. You should go and see him. Although he does a few old favourites, he is still capable of surprises, theatre and humour. I guarantee his voice wil blow you away [by Frank Gilbert]

I saw Arthur Brown's Kingdom Come perform the whole Journey album at the Elizabethan Barn in Tunbridge Wells in 1973. It was a most amazing gig and such a brilliant atmosphere, it did seem, however that Arthur Brown was totally off his head (mind you, so were some of us in the audience) but he played the Bentley drum machine on a stand, and his performance totally freaked us out. I had been into electronic music before this but Journey was something else. I still play the album fairly regularly and it still brings back memories of that night! [by Howard Keegan]

This rip of their 1973 Manchester concert, was taken from tape at 320kps and includes full album artwork (thanks to the original uploader LiborioFriki) This is an excellent live recording of Arthur Brown's Kindom Come, captured at the height of their popularity in the 70's. 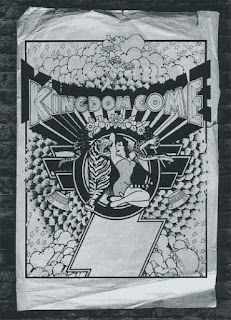 Posted by AussieRock at 9:54 PM