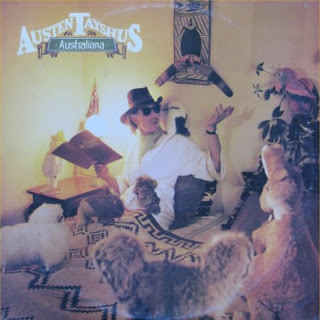 "Australiana" is a spoken-word "song" from the 1980s in Australia and contains loads of great puns on well-known Australian flora, fauna, slang and place names. For a transcript of of the lyrics to Australiana by Austen Tayshus, go to this website.
"Australiana" was released in 1983 and went to Number 1 and double platinum on the Australian singles chart. "Australiana" holds the record for the biggest selling single of all time in Australia.
Austen Tayshus continues to do live comedy shows and other interesting things - see Austen's offical website.
The stage name "Austen Tayshus" is an aptronym based on the word "ostentatious". Austen Tayshus burst into the consciousness of Australians in 1983 performing his comedy single, Australiana, written by fellow comedian Billy Birmingham. It is a spoken word piece that contains many puns using Australian terms, especially with the names of Aussie icons, places and animals. For example:
.
"...my mate Boomer rang" (boomerang)
"...do you wanna game of Euchre, Lyptus?" (eucalyptus)
"...how much can a koala bear?" (koala)
. 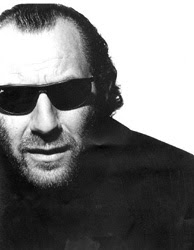 He branched out into highly political, controversial humour, often drawing on his Jewish background. A tall man (6 foot six), he appears on stage wearing a black suit and dark sunglasses. He is characterised with a resonant deep voice and a gift of mimicry. He is often moody, and taunts his audience and venue staff. He might now be compared to 'controversial' comedians such as Bill Hicks and Lenny Bruce, whom he has cited as an influence.
Since Australiana, he has performed over 10,000 shows, and produced films, documentaries and records, mostly dealing with social issues.
.
This W.O.C.K on Vinyl post covers all the four letters:
W is for Wacky, O is for Ozzie, C is for Comical and K is for 'well, how much can a Koala Bear?'
The post contains 192kps rips of the A & B sides of his hit single "Australiana" / "The Comedy Commando" with full album artwork and also includes the unedited video clip (avi) of "Australiana" (sourced from YouTube) for your enjoyment.
.
Australiana link (34Mb) REPOST
.

Posted by AussieRock at 8:56 PM