(US 1964-67)
.
Before things get too serious at Rock On Vinyl, I thought it might be fun to post a song at the end of each month, that could be considered to be either Weird, Obscure, Crazy or just plain Korny.....
. 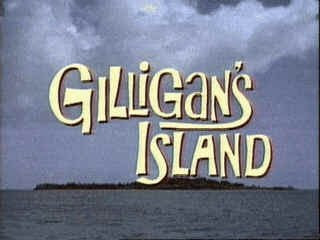 Gilligan's Island was an American television situation comedy originally produced by United Artists Television. It aired for three seasons on the CBS network, from September 26, 1964, to September 4, 1967. It was originally sponsored by Philip Morris & Company and Procter & Gamble. The show followed the comic adventures of seven castaways as they attempted to survive and ultimately escape from a previously uninhabited island where they were shipwrecked. Gilligan's Island ran for a total of 98 episodes. The first season (consisting of 36 episodes) was filmed in black-and-white, though colorized in later syndication. However, the next two seasons (62 episodes) and three television movie sequels were filmed in color.
Enjoying solid ratings during its original run, the show grew in popularity during decades of syndication. Today, the title character of Gilligan is widely recognized as an American cultural icon.
.
The two-man crew of the charter boat S. S. Minnow and 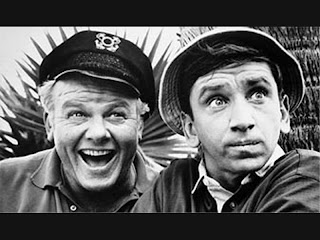 five passengers on a "three-hour tour" run into a tropical storm and are shipwrecked on an uncharted, uninhabited island somewhere in the Pacific Ocean. The episode "The Pigeon" places the island approximately 300 miles (480 km) southeast of Hawaii, while the episode "X Marks the Spot" gives a location near 140° longitude, 10° latitude, which puts it about 1,200 miles (1,900 km) to the southeast. In the episode "Big Man On a Little Stick," however, the Professor gives the position as "approximately 110° longitude and 10° latitude". It should be noted though that wherever it's location was, the island was close enough to Hawaii to clearly pick up Hawaiian AM radio transmissions on their old portable receiver. Executive producer Sherwood Schwartz believed in avoiding exposition, and so he composed the sea shanty-style theme song, "The Ballad of Gilligan's Isle," as a capsule summary of the castaways' predicament.
. 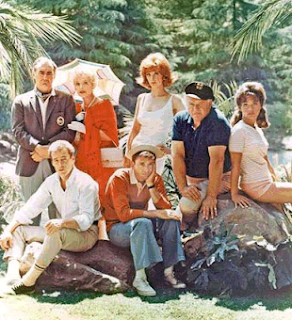 This was done so that first-time viewers would instantly understand the premise (studio executives were reportedly afraid that viewers would be confused about the show's concept without some form of explanation). He took the same approach with the themes to The Brady Bunch and It's About Time.
.
The rip of The Ballad Of Gilligan's Island included here is not the original, but rather a 'tongue in cheek take-off' of the 'Gilligan's Island Ballad' and parody based on the theme music to 'Titanic'. This spoof mix was undoubtedly made at the time when the movie 'Titanic' was popular, by a fan of Gilligan's Island (found somewhere on the web many years ago).
It's quite funny to hear for the first time and is a must for all fans of Gilligan Island. So, I therefore present to you another 'Weird' posting from WOCK on Vinyl.
.
Gilligan's Island Ballad Link (2Mb) REPOST
.
Posted by AussieRock at 10:00 AM